My husband Josh and I got married on July 20th in an interfaith ceremony that turned out to be the most meaningful ceremony we could have imagined. Our wedding reflected both of our cultural and spiritual backgrounds as well as our shared values, and the memory of it will forever remain a source of joy for us and our families. But crafting this ceremony, and finding officiants for it, was a journey, with quite a few bumps. My husband Josh was raised in a Jewish family in Brooklyn, NY, and I was raised in a Catholic family in Cambridge, MA. Josh and I knew that we wanted our wedding to include both of our religious and cultural backgrounds, but we did not know exactly what we wanted this combination to look like.

Months before the wedding we began buying books and scouring the Internet, and we found some amazing resources on interfaith ceremonies (especially on this very website!). But after actual months of reading and research, we came to one definitive conclusion: There is no such thing as a typical interfaith wedding ceremony. Some Jewish/Catholic ceremonies are led primarily by a priest, some by a rabbi, and occasionally there are “priest-rabbi duos” who often work together. Because there is no standard rubric, we were struggling to figure out where to even begin in our planning. One day Josh said to me, “I think it’s time to turn to the experts!” and I nodded aggressively—we needed help! We were getting married in New Hampshire but lived in New York City, so we set about calling various priests and rabbis in the greater New York and New England area.

We were fairly surprised to meet resistance from clergy members of both faiths. We were told in emails and on phone calls, by both priests and rabbis, that while they did not want to be rude, they would also not officiate in a wedding that was not just one faith. The unpleasant truth is that one of these occurrences was an in-person meeting with a priest that ended with me leaving in tears, followed by four months of working with a rabbinical student who then decided that she was uncomfortable officiating a wedding that was not primarily a Jewish one. Finally we approached the incredibly kind and accomplished Catholic priest in Boston who went out of his way to get a dispensation from the church. But it wasn’t until two months before our wedding that we found Dennis Gellar, a Jewish Humanist wedding officiant—through Kahal B’raira in Cambridge, MA—who was the answer to our (interfaith) prayers. 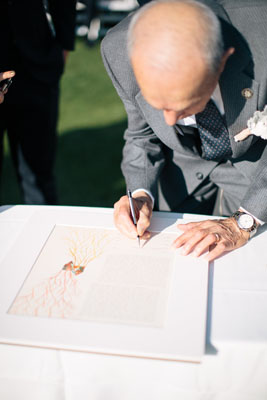 At our first meeting with Dennis he said some magic words: “I want to help you craft the ceremony that you’ve been dreaming of.” He had experience doing interfaith and intercultural ceremonies, and brought us an outline of a ceremony he had done in conjunction with a Catholic priest, but showed us the outline with the caveat that it was simply “a place to start.”

It was exactly what we needed. We were able to tell Dennis honestly what we wanted to have in our wedding ceremony: Jewish traditions, Jewish and Catholic blessings and some non-religious readings (we had a few poems in mind, and a passage from a Tom Robbins novel). We also knew that we wanted to have our friends and families involved. We asked Dennis if all of these things were possible, and he answered us, “Of course, it’s your wedding. It is possible to do it any way that you choose.”

One more very meaningful piece we wanted to involve was Josh’s grandfather, Alan Fisher. Denis suggested that, although atypical, we could sign our Ketubah as part of the ceremony and ask Alan to be one of the signers. Alan is ninety-two years old, and he does twenty push-ups every single day. He is a Holocaust survivor who was held in a camp in Hungary before escaping. His wife Esther, who passed away a few years ago, was held at Auschwitz. The couple met in a detention camp in Cyprus, where they had their first child, then moved to Israel where they had two more children and Alan became a tailor, and then finally landed in New York City. Alan is very important to both Josh and me, and having him stand up and become part of our beautiful blended faith wedding was one of the most unforgettable moments of the day.

Both Josh and I could not have been happier that we persevered to create a ceremony that fit our shared vision. In the few months since the ceremony took place, we have both been able to reflect that being blessed by the priest and then stomping on the glass while the crowd of our loved ones shouted “Mazel Tov!” was the most joyful, inclusive and positive beginning for our life together as an interfaith family.