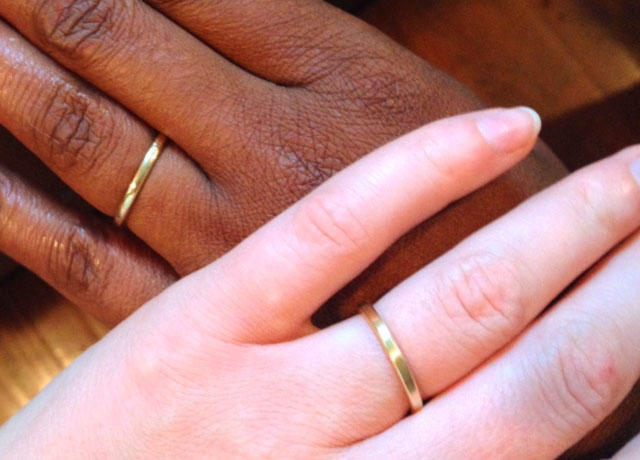 My name is Hannah, and as one half of an engaged couple, I’m excited to share with you my experience planning our upcoming May wedding. I found InterfaithFamily online when I began searching for a rabbi who was willing to officiate the type of wedding ceremony my partner and I want to have: namely a non-traditional, and somewhat Jewish one!

Let me tell you a little bit about us:

Amma and I met in San Francisco in 2013. When I wasn’t making art, I was working as a cashier in a popular specialty food market, where Amma would often stop to get lunch or that last minute, forgotten grocery item. She lived around the corner from the market, and was what you would call a regular. It wasn’t long before we had noticed each other, and the fast-paced market, with its never-ending checkout line was quickly becoming an insufficient meeting place. At the end of our first date, we made plans to see each other again the next day. We both knew early on that ours was a relationship we wanted to put our all into.

We’ve had fun together since we first met, and still do every day. We also work to understand each other and smooth out the inevitable bumps that arise. We are similar in our beliefs and dreams and in the activities we enjoy, and we can be very different in our approaches to problems and the ways in which we get through daily life. We balance each other out in really meaningful ways that make us both better people.

Some of our differences could be attributed to our respective upbringings. We have really different backgrounds. At this point you may be expecting me to describe our religious differences. Ironically, neither one of us was raised with any religion at all.

(I will explain how we ended up getting involved with InterfaithFamily, and deciding to have a rabbi officiate our wedding in my next post.)

In their early 20s, my parents moved to Vermont to escape mainstream culture and headed into the woods to find peace and organic food. My father was raised Jewish, and though very spiritual, no sooner had he completed his bar mitzvah then he decided he didn’t want any part of organized religion. My mother was raised Catholic, but her spirituality seems to be more centered around interconnectedness. I often hear her say “Isn’t that cosmic?” or use the term “kindred spirits.”

Amma’s mother was actually the daughter of a Hindu Priest, and as the very independent individual that she is, I think it just felt natural for her to discover her own brand of spirituality. Amma’s father grew up Christian (I’m not sure which denomination) and I would venture that his life’s work in science is indicative of his pragmatic and analytic mind, where religion has no place.

So, if only by coincidence, religion has not been an issue for us.  As similar as our backgrounds are in terms of religion, they are equally as different culturally. Amma’s parents are both from developing countries. Both recognized for their brilliance, they took advantage of every opportunity to educate themselves and develop careers that would eventually take them around the world. They have worked so hard to be where they are and to give their children a good life. Their perspective is potent, and they have passed much of it down to Amma and her brother. To come from such humble beginnings and work that hard means you don’t take anything for granted.

My parents were fortunate to be born in the U.S. Even if you’re not wealthy here, you are afforded certain opportunities and privileges that simply don’t exist in the developing world. Life begins on a stronger foundation. Both of my parents are musical and artistic, and because they didn’t have to worry about having a roof over their heads, or getting a good education, they were able to concentrate on more creative ventures and choose a life for themselves that suited their personal interests and beliefs. The culture within our family, not to mention the whole community I grew up in, emphasized creativity and peace, getting along and being physically and spiritually healthy. My parents didn’t have a lot of money, but because of their foundation, they had more choice and flexibility in their lives. Not surprisingly, my siblings and I were very much influenced by the priorities of our parents and our community.

Through the lens of Amma’s experience and perspective, I realize how fortunate I truly am. I have also learned that working as hard as her parents had to can produce better results than being privileged from the beginning. There are some extremely positive qualities engrained in Amma that I’m still working on. Strength, clarity and perseverance are just a few of my favorites!

Just over a year ago, on my birthday, we got engaged. Amma knew it would be the best birthday present. She had broken her ankle about a week before, and was still bed-ridden. She somehow (read: Amazon.com) managed to prepare the most perfect “birthday in bed,” complete with pink wrapping paper (my favorite) and daffodils. One of her gifts to me was a pack of origami paper. That was good enough for me, but then she said, “There’s something I want to teach you how to make.” She kept me in suspense as I followed each of the folding directions. I didn’t know until the last fold that we were, in fact, making origami diamond rings! As soon as I realized what they were, we looked at each other with big grins and she said, “Wanna get married?!” I obviously said yes.

We agreed that we wanted to have real rings to symbolize our engagement to each other, and we wanted to pick them out together. As soon as Amma’s ankle had healed, we went to our favorite jewelry shop, Bario Neal, and picked out matching gold bands…well, almost matching. Amma’s has a polished finish and mine is brushed. We hadn’t necessarily set out to get matching rings, but in the end, it turned out we wanted the same thing: a thin gold band with a tiny champagne diamond. Something simple, timeless and low profile.

As an artist, I work with my hands constantly, and I wanted to be able to wear my ring without it getting in the way. Amma doesn’t wear a lot of jewelry, so for her it had to be something that wouldn’t feel foreign on her body. We weren’t sure if we wanted a stone at first, but it felt incomplete without one, so we picked the tiniest diamond available at the shop. It gives the rings just a touch of character and represents the spark between us. Because we do not view our engagement and our wedding as two completely separate notions, we really only wanted the one ring to represent our commitment to each other. Instead of getting a second ring to exchange at our wedding, we plan to exchange the rings we already have, and get them engraved with our initials and the date of our wedding.

Thinking about the idea of rings and picking the right ones turned out to be the first exercise in a long string of challenging decisions. Within the context of planning my own wedding, a lot of big questions have come up. It takes diligence to get to the bottom of your own beliefs and desires. I didn’t fully realize until I began this process myself, that there is an unspoken, pre-written script to wedding planning and the wedding itself. Even after recognizing the presence of this script, it is easy to lose sight of what you and your partner really want. For Amma and me, the marriage is what we are most excited about. The wedding will be a [hopefully] fun celebration of our love and commitment, and the official gateway into our marriage. As we continue planning, we are trying to stay true to ourselves and keep our own desires for the big day in the forefront of our minds, whether they coincide with the script or not.