Our Wedding Day Was Perfectly Us

I would say that the morning of the wedding dawned like any other day—but, in my case, that would be an utter lie. The day of the wedding dawned and I was awakened by my good friend and stylist, in whose hotel room I’d spent the night. I hadn’t stayed there due to any superstition of not seeing James the night before; rather, I knew that I would want to sleep in as long as possible and I would be getting ready with her, and this way I could roll right out of bed and into the chair where the styling would begin.

As I shrugged into the robe I had made for the occasion—with “bride” emblazoned across the back and my new monogram on my shoulder—I remembered the madness of the night before. After dinner, some of my closest friends and I had gone down to the beach next to my old synagogue and three of us ran into the lake. I hadn’t returned to the mikveh of my conversion, as I had originally planned, for a very vain reason—I’d gotten my nails done for the wedding and I didn’t want to take off all the nail polish (one of the mikveh preparation rules).

So I’d dressed in white and run into the lake instead, next to the stained glass window of the room where I received my Hebrew name, and prayed as I sank into the chilly waters. Please give us sun tomorrow, I had begged, afraid of the rain in the forecast. Please let us have our outdoor wedding by the lake. 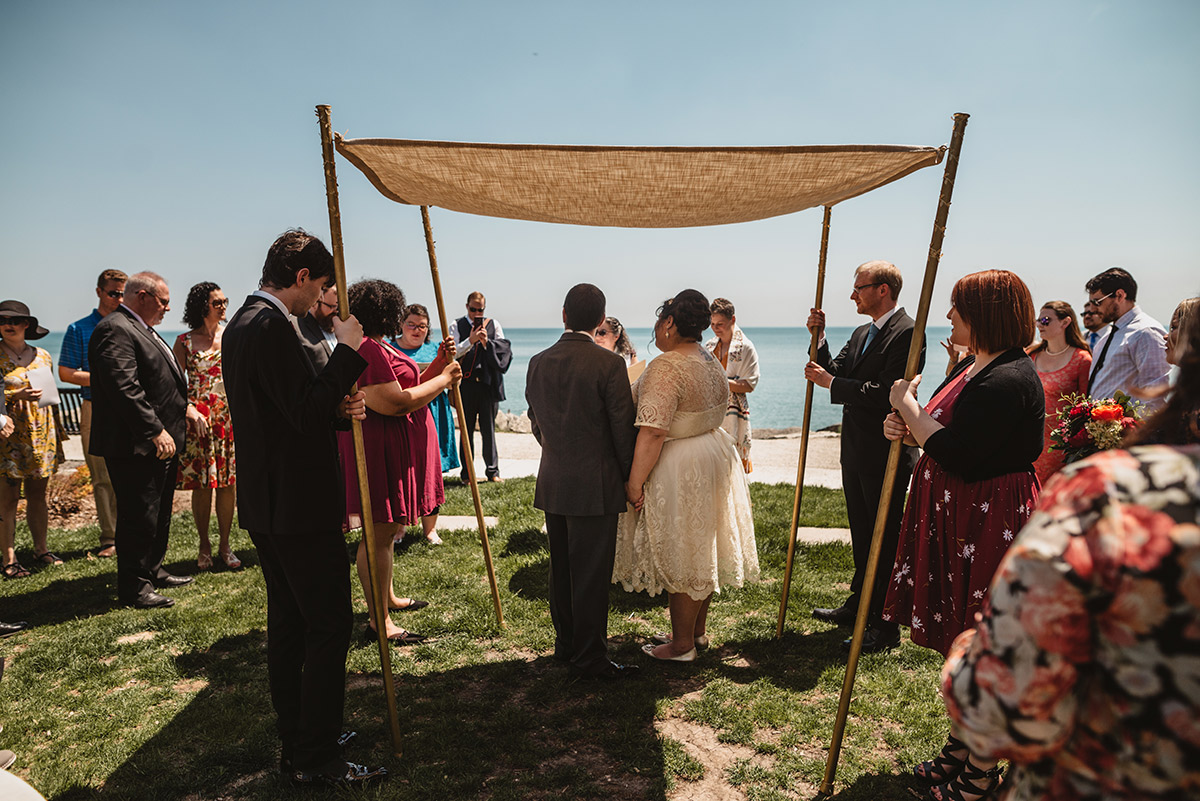 Yeah, God gave us sun, alright—90-plus degrees of it all day long.

By the time my mom and grandma arrived, my hair was almost done—and it was easily 90 degrees outside. We were already running behind, so we started rushing. I had just put on my eyeliner and mascara when Molly, one of my best friends, handed me a piece of paper—an email from my soon-to-be mother-in-law, who was unable to join us but sent her best wishes. A few stray tears later, we hurried through the rest of the makeup, sprayed it into place, and began wiggling me into my dress.

In a matter of minutes, I was fully dressed—and the hands of some of the most important women in my life had been a part of it, as a sort of blessing. 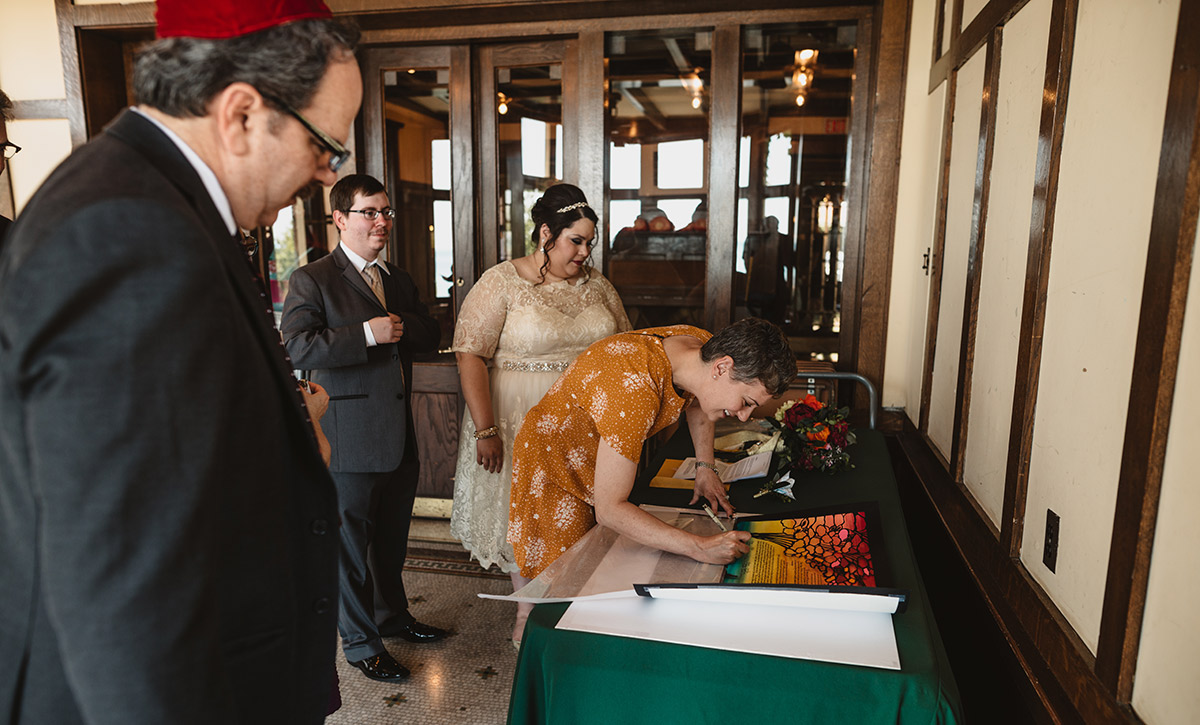 At the park, I could see guests milling about in the heat. I was running late, of course, and I remember clearly the response of the rabbi and cantorial soloist when I texted them to apologize: The wedding can’t happen without you. I repeated that as a mantra as I ran out of the car and into the venue, where I was held in the hallway as we set up for our first look photo.

James was standing in the sunroom, his back to me, and I approached him with about as much nervousness as I had felt in that Dublin airport over a year before. We’d been living together for 20 days at this point and we had been planning the wedding for so long, yet I was still feeling the butterflies as I placed my hand on his shoulder. At the photographer’s cue, he turned around, and we both laughed and gazed at each other and then crashed in a hug.

We would’ve stayed there if my dads hadn’t walked in, ready for the ketubah signing. Rabbi Ari Moffic said some beautiful words about what the ceremony meant, while James and I held hands and tried to breathe through our nervousness. As my dads read the text, we marveled at the little details in the ketubah that made it uniquely ours—the flamboyán tree for me and the chestnut for him, our initials on his tree, our cat Kiwi under mine, our favorite bible verse in the intertwining branches. We all signed with shaking hands and brilliant smiles, and James and I looked at each other with a measure of relief. “It’s over, you’re married!” Rabbi Ari said. “We just have to do the ceremony in front of people now.”

They left to give us a minute, and when we stepped outside, the rabbi and cantorial soloist beckoned us forward with Dodi Li. We stepped under the chuppah and Rabbi Ari began by welcoming everyone, then explaining the meaning of the chuppah. We then acknowledged both our faith traditions, as well as the many loved ones who were unable to join us for the wedding. After a few remarks on the nature of love, Rabbi Ari got to tell our rather ridiculous love story—ending with some descriptions of one another that we had written very early in the planning process. We made each other laugh and tear up a little bit, as it should be, and then it was time to get really serious! 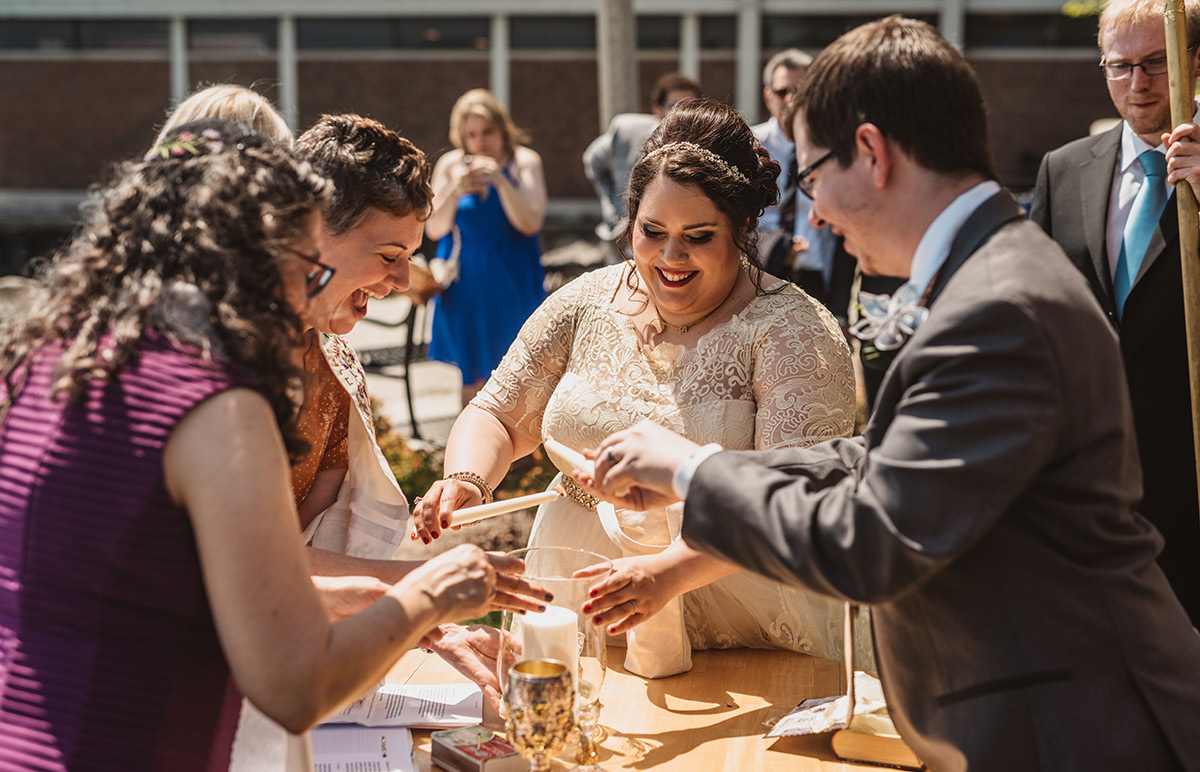 After a beautiful moment of Shehecheyanu with a bonus explanation from Rabbi Ari, we declared our intent, were supported by our community in our path and exchanged the vows we had written. We then exchanged rings, with words from Song of Songs—and, instead of saying ani l’dodi v’dodi li, we each said it in our native language, James in Irish and I in Spanish. We then lit a unity candle, to represent James’ tradition as well as my love for lighting candles for Shabbat and yom tov, and moved into the sheva brachot (seven blessings) with a kiddush over sparkling grape juice brought from Ireland as a nod to the Christmas dinner we’d had with James’ parents the year before.

Our cantorial soloist sang the blessings, alternating between feminine and masculine language for God, and some of our friends bestowed modern, custom version of the blessings on us rather than reading a direct translation. Surrounded by all that love, my grandmother wrapped us in my tallit, and we received the final benediction—the Priestly Blessing—before being declared husband and wife. After a quick explanation of the breaking of the glass, and a parting recitation—my favorite Irish poem!—James broke the glass and we ran off followed by a chorus of Siman Tov v’Mazel Tov. 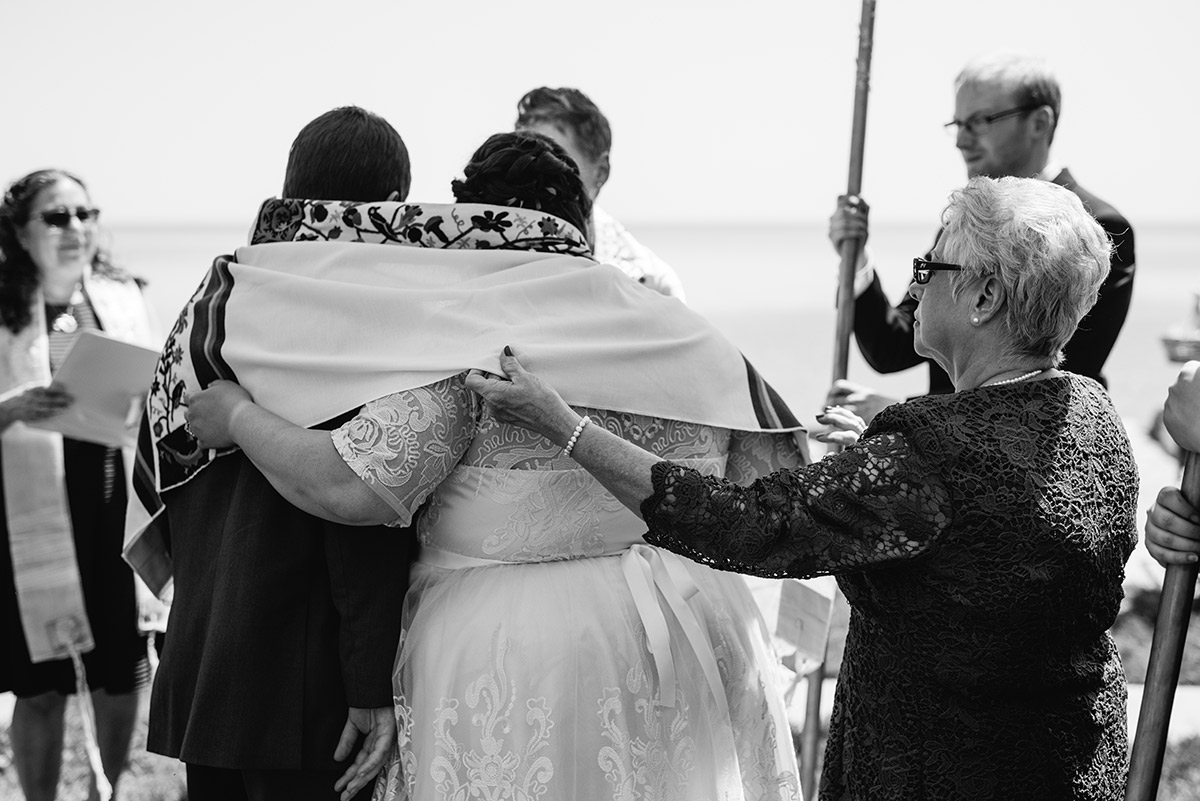 If the next bit seems like I’m describing it in a way that gives you whiplash, that’s because everything that everyone has told you about your wedding is true—it goes by in a whirlwind and you don’t remember much. I only remember so much about the wedding ceremony because a) I wrote it and b) I still have the ceremony draft so I could look at it and the pictures and refresh my memory.

After the ceremony ended, we took time to ourselves, in a sort of yichud, high-fiving over our success at getting married outside in 95-degree weather with some of our favorite people. We did the posed family photos by the lake, and our solo photoshoot at my alma mater and raced downtown for the reception. We walked in to a song from a video game James and I both love; we said some words for our toast; we laughed and ate and socialized with our wonderful guests.

The next day, I got ready for our after party which included getting half my hair cut off. I wore a rented white dress with a built-in cape and custom Minnie Mouse ears with a flower crown and veil. The party was at a bar where we did shots and raised money for charity and celebrated more with all of our out-of-town guests—mostly James’ friends from Ireland.

It was fun and lovely and perfectly us—and that’s really the number one piece of advice I can give future brides and grooms: Make sure your day reflects you.

We spent hours upon hours curating songs for our reception playlist and selecting readings and gathering ritual items that were significant to us—and so many people commented on those little details. People will likely not remember what your centerpieces look like or how many kinds of flowers were in your bouquet, but they’ll remember the laughs from the funny anecdotes in your ceremony and the sweetness of your parents helping you light a candle outside, right next to the lake, in a losing battle with the wind.

And, to paraphrase Rabbi Ari when I expressed doubts about writing a ceremony that was “good enough”—the goal is to celebrate your union, and at the end of the day, even if you forget your vows or drop the rings or fail to break the glass, you’ll still be married. 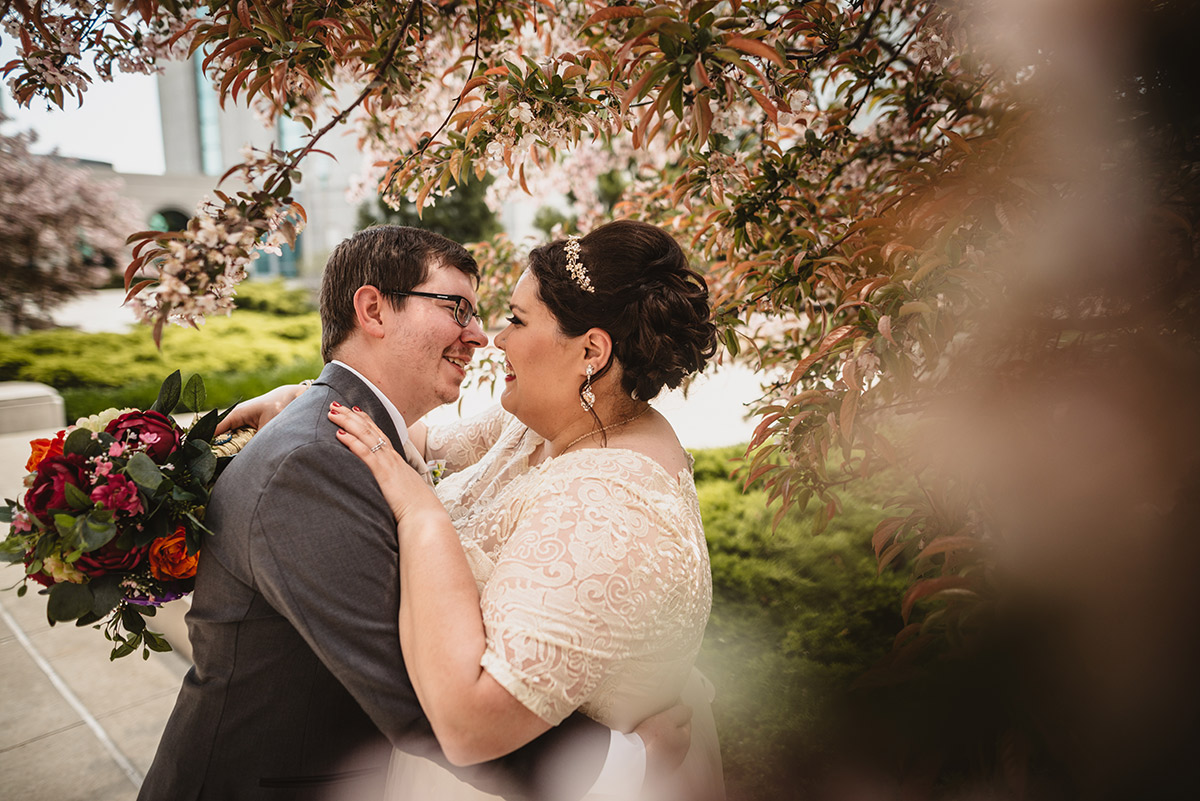 Elle is a bilingual educator and doctoral student living in Chicago with her Protestant husband, their agnostic roommate and a sassy cat named Kiwi. A Jew by choice, Elle is passionate about interfaith advocacy, Jewish education and preserving the Ladino language (which she is trying to teach herself). After an intercultural, interfaith, and intercontinental romance, she and her husband are navigating immigration following their May 2018 wedding. They are looking forward to continuing to grow together and building a home that reflects both Irish and Puerto Rican culture so that they may honor their homelands.