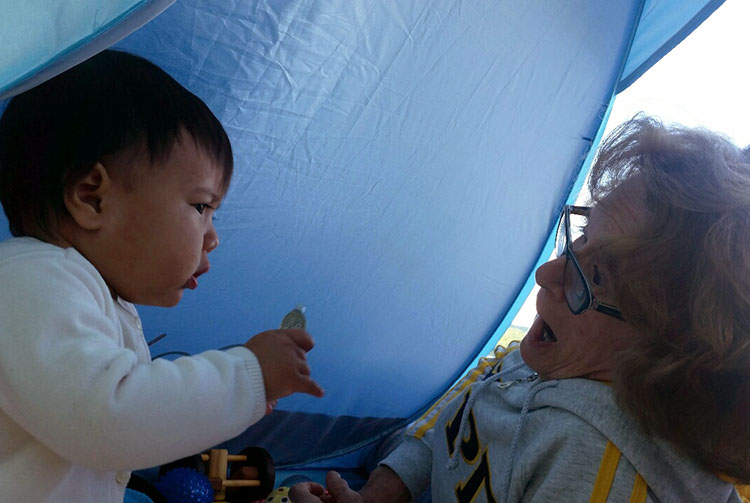 We had been planning our vacation to upstate New York for six months. The hotels book up by the end of August, so we made the reservation well in advance. Adrian, my significant other, got his freshwater fishing license, and we ordered our daughter a ton of new summer clothes. Everything was packed, even Grandma, who was accompanying us on the trip because she loves New York and offered to babysit in an attempt to let Adrian and me have some time alone on our vacation.

But plans never work. Not for me, at least. I look at the entire scope of my life and can say that almost anything I planned went awry. I had planned to have a Jewish wedding with a Jewish husband. But when I fell in love, it was with Adrian, a devout Catholic from Mexico. We aren’t married, we have a beautiful daughter and nothing went as planned. But still we planned our trip.

The first night at the hotel, our daughter, Helen, seemed different. I couldn’t put my finger on it, but something in her personality had shifted. We attributed it to the fact that she had been in the car for five hours with only a few short breaks in between. We also put her to sleep in a Pack ‘n’ Play instead of a crib, because it’s all we had and Helen won’t sleep with us. We went to sleep and the next day—our first official vacation day—we went to the lake.

Adrian packed his fishing gear into the car. I planned what food we would eat, what toys Helen would play with and what bathing suits everyone would wear for the photos I planned to take. We propped up a tent with a blanket for Helen. Adrian went off to fish. Grandma and I stayed and played with the baby. At one point I took Helen into the water and she started to fuss. This was also unlike her. Helen loves the water, and she’s not usually fussy when it comes to trying new things. But I just thought she was over-stimulated. I’d kept her out of the sun and covered, and I couldn’t think of what could be bothering her. So I took her out of the water and we spent the afternoon playing and napping.

When we finally got back to the hotel, Helen had a fever and was crying. I noticed that her eyes looked sick. I did what any new mother with a sick baby in a strange town would do: I freaked out! I took her clothes off and left just her diaper. I washed her with a warm washcloth. I hugged her, I kissed her, I told her everything was my fault and I cried.

This is when being in an interfaith family comes into play. Sometimes interfaith also means inter-culture. Helen is from two distinct and beautiful cultures: Jewish and Mexican. Whereas I was raised to panic and have high anxiety, Adrian grew up in a village where, when a child was sick, you waited before you panicked. I had already gone out to buy Tylenol; Adrian said no Tylenol. I had already gone out to buy canned chicken-noodle soup because I didn’t have a kitchen to make soup in; Adrian said chamomile tea. I was taking Helen’s temperature with the thermometer every five seconds; Adrian just felt her back. I was taking the baby’s clothes off; Adrian said to let her sweat it out and cover her.

So we called the doctor in Brooklyn. I have the best pediatrician in the world, or at least I’d like to think so. Adrian and I have been taking Helen to Tribeca Pediatrics in Boerum Hill since she was two days old. They’re a good fit for us because they understand our religious and cultural differences and look at each child as an individual. They know Adrian’s concerns about modern medicine and my concerns as a Jewish mother who wants to make everything better with food. 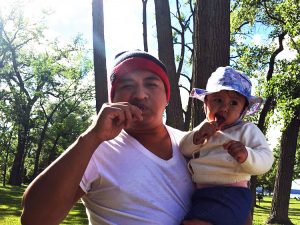 They told us to watch the fever and that Tylenol wasn’t necessary, unless Helen couldn’t sleep. They said the fever would most likely be gone by Saturday. Saturday came, and a full-body rash came with it. The fever was not down; it was up and down. We called the doctor again. “Give it one more day,” was the advice from the other end of the phone. Apparently the rash was a reaction to the virus, and there’s no medicine to give a child for a virus. According to Tribeca Pediatrics—and the wise mothers of Mexico—the baby has to fight it.

Adrian did what any father would do when he saw the rash: He freaked out! It was then my turn to assure him that the rash was part of the process. Helen was also getting her big teeth in the back, and in addition to the fever and rash, she was teething like crazy. By Sunday she had no fever and the rash was going away. We went back to the lake. I bought her a teething ring and Adrian bought her a lamb chop, which he cooked on the grill and let cool. She chomped on the lamb-chop bone the whole day, and I think it was better than any teething ring ever made. She was smiling and happy and was her own self again! We planned the rest of the week and then threw the list of plans in the garbage and said, “Let’s just play it by ear.”