My Wife Eats Cereal in The Garage 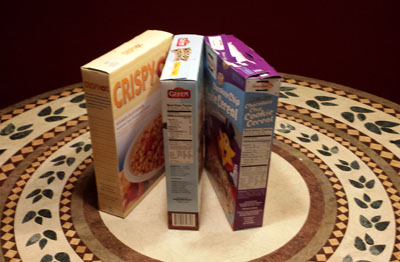 We have been through 20 Passovers together. My wife does pretty well with the eating restrictions but somewhere around the middle of the holiday, there she is eating cereal in the garage. That’s where I store the chametz, the bread products that are off-limits during Passover, to make the rest of the house ready for the holiday. I “sell” it to a friend or neighbor who isn’t Jewish but is intrigued enough to play along. (That ensures that I don’t technically own it and it can stay there as long as it’s undisturbed.) But there it sits, calling out to Kirsti all week. Each bite of matzah brie and cardboard flavored Passover cereal increases her longing for the good stuff she knows is only steps away. Do I care? No, I have never cared. I have always drawn a line between my own, personal practice and hers. I need to clean the house of bread. I need to bring out the glass plates. But Kirsti didn’t grow up Jewish, and while many Jewish practices are meaningful to her, this one is not.

Now enter two kids. None of these differences in our practices made an impact on our home life until we had children. While she can practice however she likes, I do want to maintain a Jewish household for our kids. In similar cases, we tend to face our differences head on, explaining to our children where our beliefs or practices may differ from one another.

Many parents who come from different backgrounds will only tell one parent’s side of things until kids get older and can better handle the paradoxes. I see the value in that approach, but it’s not for us. We have always told the truth about where we differ religiously…for better or for worse. We have different ideas about theology and share with our boys that people generally—and even Jews—don’t all believe the same thing. We have different needs in terms of attending synagogue, and I am happy to be the regular Shabbat service goer with them, explaining that while she’ll go sometimes, it’s more of a regular practice for me.

But Passover is tough because it’s centered in the house. Do I want them to learn that it’s OK to run to the garage when they have a craving? I don’t need my partner to keep to it, but I want them to learn the discipline early on as a meaningful part of the Passover celebration. I want them to internalize their history as slaves being freed as they stop themselves instead of reaching for some bread. I hope they will share the excitement with me when the kitchen gets turned upside down to get ready for the holiday. But I also don’t want to denigrate my partner’s practices by making them lesser. I respect her and her relationship to Judaism. How do I hold both realities?

In truth, I’ve never lived in a house where we were all practicing Judaism in the same way.  I grew up in a home with two Jewish parents for whom Jewish eating practices held no meaning. We always laughed that it wasn’t Passover if there wasn’t a honey-baked ham on the table. OK, we never went that far, but ham and seafood were staples in our home. My mother would proudly say, “I don’t practice my religion through my stomach.” But even as a kid, I was drawn to the idea that refraining from bread made the week of my favorite holiday feel special, and I worked around my family’s need for their cupboards to remain untouched.

So we talked to our kids this Passover about the realities of different kinds of Jewish practice. They were informed that their Mommy sneaks some chametz (not surprising since they already knew that although she has tried valiantly to give them up over the years, she has a soft spot for cheeseburgers). But we didn’t dwell on the food-talk. What we did spend time discussing were the values we hope they took away from the holiday. Standing up for those who are oppressed. Using your own story of pain and difference to inspire you to rescue others. That freedom is possible. And for my partner, we know that her freedom is saying farewell to matzah for another year.