Mom: What is Your Religion? 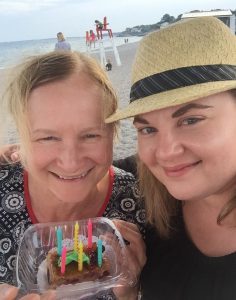 Being from an interfaith family has influenced my life in myriad ways, most especially in my choice to focus my rabbinate on working with other interfaith families. I’ve written about my own upbringing and my parents several times over my tenure at InterfaithFamily, hoping that my own experiences might resonate with our readers. Yet, so far, everything I have shared has been in my voice and from my perspective. So, in honor of Mother’s Day and to honor my mother, I interviewed her to finally shine some light on her perspective.

I asked her a variety of questions about her early life and meeting my dad and then about how they made decisions about religion as they had children. While we have had many conversations throughout my life touching on similar topics, I have never sat down with my mother and asked her what it was like for her to be in an interfaith family, especially long before it was as accepted as it is now.

My mom is a special woman; quiet and thoughtful, passionate yet relaxed. I am the Jew, the rabbi, the human being I am because of her and my dad. I hope you enjoy a piece of her story.

Some background: My mother, Kathy, was one of five children born and raised on the North Shore of Massachusetts in a very Polish Catholic family. When she was 18, she packed her bags and headed to college, the first in her family to attend, where she met my father Richard, a nice Jewish boy from New Jersey. They were married by a justice of the peace in 1972 in Boston.

Me: When you were dating, did you ever have conversations about how you were from different backgrounds/religions?

Mom: We didn’t really have a big conversation. Neither of us were particularly active in our religions. I grew up in a pretty Catholic family. My grandmother lived with us and was from Poland. The church was her life. She grew flowers and every day brought them to put on the alter—it was within walking distance from the house. I never personally felt that connection even though, as a child, I attended every Sunday.

Richard’s family wasn’t particularly religious either. He wasn’t practicing Judaism when I met him. So obviously, we were more concerned about what our parents would think as opposed to what we were going to do together.

Me: When you did decide to get married, how did your family react?

Mom: There were certain members of my family, some aunts, who didn’t think it was right.  My grandmother, who lived with us, wasn’t supportive. They didn’t come to our wedding. It stung not having them at my wedding, but it didn’t disturb me for any length of time. But my parents and my sisters and brother were all on board after talking it through. It was just the way my parents were. They were very accepting and compromising and after having a conversation, my father said, “It’s your life, you make the decision.” And after that there were no repercussions.

Me: Did you know any other people who were also marrying someone from a different religion?

Mom: We went to college in Boston and there were a lot of people from the New York/New Jersey area and Massachusetts. So we were meeting different people all the time. My roommate, who was Catholic, met a Jewish guy from New Jersey and they were also married, a little after we were married. A couple of other people we knew in a similar situation also married. There didn’t seem to be a barrier. It was kind of exciting to meet someone who was different. And religion never seemed to be a problem. It was the end of the ’60s: These old barriers were meant to be broken.

Me: What was the conversation about who was going to officiate at your wedding?

Mom: We wanted a Justice of the Peace because it would just make it easier. Neither of us were connected to a synagogue or church and we felt that would be the easiest and cleanest. It wouldn’t be favoring one over the other. We didn’t care. We really didn’t take religion into account at that point.

Me: In the first years of your marriage, before you had children, did you have any connection to religion?

Mom: For the first 10 years of our marriage, before we had children, we were a-religious. We might have gone to a family friend’s house for Passover once, or Christmas at my parent’s house, but never at our home. Because my upbringing was pretty rote (learn the Catechism, study the prayers, follow whatever you needed to do), it didn’t feel relevant to my life at all. Judaism seemed interesting to me.

Me: When you were planning to have children, did you have any conversations about religion?

Mom: Recognizing we had two families each with different religions, we thought, we’ll wait until our child is old enough to choose. It lasted for a little while, but it was naïve to think that a child was going to grow up without a religion and suddenly pick one. When you were a baby, we thought that us teaching you would be enough.

Me: When did we start having any religion in our lives?

Mom: Well you know this story, Jillian. You had a friend named Julie, who was Jewish. She invited you go to her Hebrew School class and you came home and asked. You knew your dad’s family was Jewish and mine was Catholic. We did explain this to you, that one family celebrated certain things and the other family celebrated other things. We wanted you to experience the world, so we said yes to you going to Hebrew School. But this came as a surprise to us.  We were cringing that now we would have to deal with this issue.

So you went, loved it and asked if you could go again. And we thought, uh oh, this is the beginning. So we went to the temple to check it out and we spoke to a few people and were told we had to join, even though we were not eager to join. But we joined, so you could go to Hebrew School.

It was a Reform synagogue, so there was never a problem with me not being Jewish. They were eager to have us and they welcomed us wholeheartedly.

Me: What was your experience at synagogue?

Mom: It was like deer in the headlights! When do I stand or sit, what do I do? It was just a totally foreign way of having a religion as opposed to Catholicism. I was confused but learning as I went along. I felt welcome, everyone was very nice. We met a lot of older members of the synagogue who were thrilled we were there, and we are still friends with them now. It was a great community to be a part of. After learning more about Judaism, talking with people, listening to the Rabbi, I realized that this is a whole different animal than Catholicism. It was more about finding meaning, things you could bring into your life. It wasn’t about memorizing; it was about thinking and challenging yourself. When I caught onto that, I thought, this is interesting to be a part of. It was a better religious experience for me than I had as a child.

Me: The question I can’t believe I don’t know the answer to: If someone were to ask you now what religion you are, what would you say?

Mom: I would say I’m Jewish, just to make it easier.  I never converted, so I know I’m not technically Jewish.  But from a view of the world, a philosophy, I am.

My mom’s story might be a bit like yours. Perhaps you related to a few things she said, remembered feeling similarly or maybe your story is vastly different. Whichever the case, telling and listening to stories is such a wonderfully and necessary human thing to do. We learn from each other, we gain perspective, we feel connected and less alone when we take the time to listen and learn about each other.

Finally, I want to thank my mother, Kathy Cameron, for being open with me, allowing me to make her story public and for being the best mom a girl could ask for. Happy Mother’s Day, Mom. 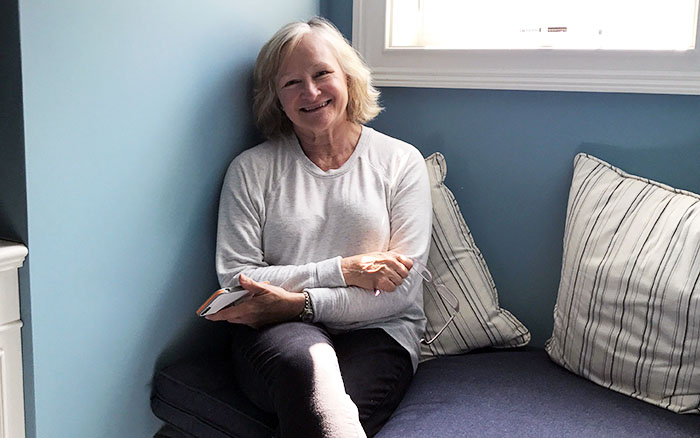 Want to honor someone special this Mother’s Day? Make a donation to InterfaithFamily in their honor.

Rabbi Jillian Cameron is the former director of 18Doors/Boston. She was ordained at Hebrew Union College – Jewish Institute of Religion in 2012 after receiving a Master’s Degree in Jewish Education in 2008.