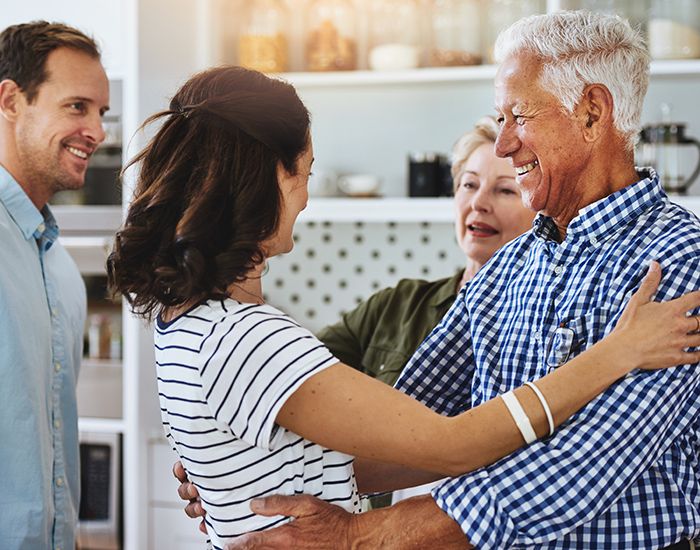 Meeting the Parents of Your Jewish Daughter’s Catholic Fiance

Prior to Taryn’s meeting Sean, we all were sure she would marry someone Jewish. She was an interested and active participant in temple life and traveled to Israel twice. She thoroughly enjoyed Mitzvah Corps, a six-week service project sponsored by the Jersey Federation of Temple Youth (JFTY). In college, she organized a once-a-month Reform Shabbat service and dinner at the Hillel chapter that attracted more than 100 students, far more than the regular Conservative-Orthodox hybrid. She also served on the Hillel board and started a Council on Jewish Life.

At home, we regularly lit candles and ate dinner together on Shabbat. We celebrated Passover and Hanukkah, though not Sukkot. My wife Liz was president of our local Jewish Community Center and helped each year’s confirmation class at our temple write its confirmation service.

Nevertheless, when Taryn was 22 she fell in love with Sean, an Irish Catholic. Sean’s religious commitment appeared to stem less from personal conviction than from family tradition. He rarely attended Mass on his own, but did accompany his parents whenever he was with them. And although he would attend High Holiday services with Taryn and took part in Passover seders, he expressed no interest in considering becoming Jewish or renouncing his Catholicism.

Unfortunately, Taryn and Sean found it difficult even to discuss religion, let alone resolve their differences. So for four years Taryn agonized over the religion issue, always hopeful that Sean would somehow agree to convert or to let her raise their children as Jews who would have bar or bat mitzvah ceremonies. Finally, over several months last spring that included some interfaith counseling, Taryn and Sean decided to marry. They could agree only on the lowest common denominator: neither would convert; they would celebrate both sets of holidays; their children would be “nothing.” Any future children would neither be baptized nor called to the Torah as b’nei mitzvah.

Although Liz was clearly more disappointed by this outcome than I, we both would have preferred that Taryn choose a different future. Nevertheless, we supported her decision and are working to help her navigate this difficult path.

Once Taryn and Sean announced their engagement, we felt we should meet Sean’s parents, Marie and Henry O’Neill. We were somewhat apprehensive. Marie was as distressed that Sean was marrying outside his faith as was Liz. And, like me, Henry seemed more willing to accept the intermarriage. We had spoken to the O’Neills only once, on “engagement night.” As our proposed meeting approached, Liz exchanged e-mails with Marie, who repeatedly mentioned our children’s blessings: how blessed they were to have such caring parents, how blessed they were that the wedding would be so nice, how blessed they were to have such fun together. In one email, Marie matter-of-factly stated that she assumed that both a rabbi and a priest would officiate at the wedding. This was not an acceptable option for us, and Liz and I became increasingly anxious about the gap between the O’Neills’ worldview and ours.

As it turned out, Taryn and Sean vetoed the interfaith ceremony in favor of a judge, a golf partner of mine. And, fortunately, our Labor Day meeting with the O’Neills was friendly and stress free.

Marie and Henry are delightful. We have surprising similarities in our families. We each have two sons and a daughter, and the ages of our children matched those of the O’Neill’s. Moreover, Marie, like Liz, is one of three children, and Henry, like me, is one of four. Marie has a gay brother, just as Liz did (he died of AIDS). Marie is a health-care professional, and Liz is a writer who covers the health-care industry. Henry is a researcher, and I am a college professor. Both our youngest children were just starting college.

Because it was raining heavily, we spent most of our time together in our hotel, where two weddings–ironically, one Jewish and one Catholic–were underway. This gave all of us the chance to talk endlessly about wedding plans and gave Liz and Marie a chance to critique flowers, outfits and restroom favors. None of us brought up religion.

We left the meeting feeling that the wedding would be harmonious and that Taryn and Sean could navigate their own path without offending either family. At our meeting, Marie had said she hoped Taryn and Sean would share vows under a huppah or Jewish wedding canopy and that she also hoped that Sean’s Irish roots could be honored with some traditional Irish wedding music. We readily agreed. But our optimism was short-lived.

A month later, Marie mailed a tape of the chosen music. It turned out to be sacred Irish music replete with Catholic prayers. Sean shared Taryn’s unwillingness to consider music that Jews consider offensive. Unfortunately, vetoing the Catholic music cost us the huppah. This decision was not so much a quid pro quo as a necessary sacrifice to keep the wedding from tilting toward Judaism.

Despite the music-huppah discomfort, we feel good about the O’Neills, and we expect to get along well with them whenever our paths cross. Liz and Marie continue to exchange emails. Liz has kept Marie informed about our choice of wedding site, caterer, photographer and florist. Marie has told Liz about the location and prospective menu for the rehearsal dinner. Sometimes the correspondence takes on a far more personal tone as the two discuss, sometimes quite poignantly, being empty nesters and caring for aging parents.

We hope that Taryn and Sean’s marriage will be a success. Although we do not expect to be close friends with the O’Neills, we do look forward to seeing them at the birth of grandchildren, birthday parties and graduations–if not at bar and bat mitzvahs.

Getting Married During a Pandemic? Here’s What to Know.

Postponing Our Wedding But Not Our Marriage