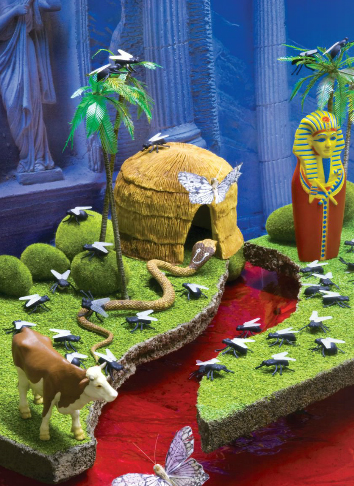 A few interesting articles crossed my desk this morning, all about Passover.

The Four Questions hold a central spot in the Passover seder. Why is this night different from other nights? Reform Judaism, the magazine for the named denomination, asks in its spring issue, “What’s your favorite language for reciting the first question?” They include 20 examples of that first question asked in different languages, from Phoenician to Thai to Klingon.

I’ve signed the Four Questions before (both in ASL and LSQ) and recited them in French. Which languages does your family ask them in? Have you tried having each person at the table ask one of the questions in a language that they know? It’s an interesting way to make the questions both universal and accessible in new ways.

In discussions at your Passover table, how do your friends and relatives view the plagues? Inside Magazine, of Philadelphia, offers a review of the Ten Plagues, another central component of the Passover seder. In “Decimation and Emancipation: Understanding the impact of the 10 plagues,” competing opinions are presented on the importance of the plagues, their historical accuracy, their relevance, and more.

One view is that the plagues are “political allegory that is part of Exodus, the Israelites’ ‘birth of a nation’ story.” But that there weren’t ten, they didn’t happen in that order; there wasn’t this unnamed Pharaoh. Instead, the plagues represent the “systematic dismantling of the Egyptian socio-economic system, which was based on agriculture and the Nile.” In other words, they were formed so that the story is, “Our God brought Pharaoh of Egypt to its knees. That’s why we Israelites have the right to live independently.”

The opposing view could be summarized as more faithful. “Having not found proof of the plagues doesn’t mean they didn’t happen. It means the proof has not yet been found.”

“Are there acts of nature that can account for some of the plagues? Yes,” Rabbi Albert Gabbis, who lived in Egypt, says. “For example, the plague of blood in the Nile. We know that sometimes, the Nile turns red. When I was a child, I saw it with my own eyes. The rain brings the red clay from the mountains of Ethiopia into the Nile. But I would say this: In either case, the hand of God is there.”

Then there’s the confusing matter of kitniyot (legumes, corn, rice, soy/tofu, etc.). Last year, we offered a concise guide to Passover food guidelines via our pals at JewishBoston.com. This year, the Jewish Journal (greater Boston area) expands on that guide with Corn, Rice? Yes, No? – and some often contradictory answers:

Rabbi Baruch HaLevi of Congregation Shirat Hayam in Swampscott has advocated for the consumption of kitniyot on Passover for those who are comfortable with it.

“I believe in making Judaism more, not less accessible, and it makes Passover a heck of a lot easier if we can have corn products,” HaLevi said.

The important thing is that people understand the difference between a Jewish law and a custom. Chametz, like bread, is forbidden by Jewish law. Corn products depend on your custom, he said. Each year, he gets questions as people try to sort out the differences.

“In Israel, you can find products marked ‘kosher for Pesach’ for people who eat kitniyot, but here we can’t know if the kitniyot have been mixed with wheat,” Zuker said.

She believes the Ashkenazic practices are old enough to be considered law in some communities, but added that different communities have different practices.

Not every seder is lucky enough to host “/?s=Jake+Gyllenhaal”>Jake Gyllenhaal (sorry!), but you can enjoy his company for a few moments:

As far as “new thoughts” goes, this one might be a stretch. But come on – who doesn’t love Jake?

Hopefully some of these thoughts will help liven the discussions at your Passover seders this year!