This article originally appeared in the San Francisco Chronicle and is reprinted with permission. Visit www.sfgate.com/chronicle.

Bubbe (grandmother) Susan cradles sleeping Ryan, not yet two weeks old, in her arms and will not give him up to other relatives. The little guy is utterly and completely at peace, his mouth slack and one arm draped casually over his forehead. He can trust bubbe.

“Oh, you sweet, sweet thing,” coos Susan Sockol, the doting bubbe who strokes wisps of Ryan Michael Sobil’s brown hair. “You have no idea what’s going to happen, do you?”

No, he certainly does not. Ryan is blissfully unaware that this is the morning of his bris–the 3,000-year-old circumcision ritual that is a Jewish male’s first rite of passage, followed by his bar mitzvah at puberty and later his wedding ceremony–and bubbe has been entrusted by parents Marc Sobil and Ilona Sockol to make sure he stays content.

All around Ryan, though, activity buzzes at the Sobils’ Palo Alto home. Friends and family scurry in the kitchen, setting up the table spread for the post-bris repast amid a drone of blenders and clanging of pans. Kids sit politely in front of the TV, engrossed in the animated antics of Sponge Bob Square Pants. Men in yarmulkes (head coverings) huddle in the living room, talking sports and stocks, but nimbly avoiding any mention of the ceremony to be undertaken.

But in the dining room, Dr. Fred Kogen is all business. Kogen is a mohel (person trained to perform a ritual circumcision) who has traveled from Los Angeles to conduct the ceremony, and he arranges the dining room table like a compulsive interior decorator. Everything must be just so. See, even in a reform Jewish brit milah (the formal Hebrew name for a bris), traditions must be kept.

So, Kogen props up framed photos of deceased family members, sprinkles pink flower petals around the embroidered tablecloth, arranges candlesticks away from the pillow where the procedure will take place, puts the family’s kiddush (blessing that is recited over wine) cups in spots of honor and prepares the ceremonial empty chair for the Jewish prophet Elijah.

“See, there’s anxiety, fear, trepidation, sometimes even negativity in the room. My job is to bring all of this together and make this tribal blood rite a memorable occasion.”

Kogen knows his business. He’s been called the “mohel to the stars,” and has removed the foreskin of the sons of actors such as Michelle Pfeiffer and Jason Alexander, among other celebrities. A doctor and licensed mohel since 1985, Kogen has traveled all over to do his job, even once performing a bris for a baby born to a woman in a Hell’s Angels motorcycle gang in the Mojave Desert.

Marc and Ilona don’t have any special requests for Kogen, other than he handle Ryan with care. Ilona says she was sold on “Dr. Fred” because he uses anesthetic on the baby’s penis before cutting. She said she did not have a bris for her 5-year-old son, Alex, because she wasn’t aware at the time that reform mohels could anesthetize the babies.

“That’s very, very important to me,” she says, “to minimize the baby’s pain.”

Bris table set, finally, Kogen takes the parents and Ryan upstairs to the baby’s room for pre-circumcision instructions. Kogen administers a topical anesthetic lotion to Ryan–who finally wakes up and bawls–and reviews the prayers, poems and other rituals he and family members will invoke during the ceremony. Then he explains the particulars of the circumcision to Ilona and Marc, complete with graphic before and after photos.

“Uh, that’s a little more than I need to know,” Marc, says, squeamishly. Kogen smiles. They walk downstairs with Ryan, who has fallen asleep once more. Friends and family are invited to gather in a circle around the table. Marc and Ilona stand behind Kogen, while grandparents Susan and Jack Sockol sit to Kogen’s right.

The mohel, known as a real cutup for his below-the-borscht-belt humor during bris ceremonies, explains to the crowd how Ryan has been anesthetized with Tylenol, the topical lotion, and will be given a touch of kosher wine. “That lotion is the greatest thing since Viagra for a male, right Grandpa?” Kogen quips.

Bubbe Susan serves as the “sandeck,” or special helper. Kogen hands her Ryan after the baby is wrapped in a tallis, a Jewish prayer shawl. “Now he looks Jewish,” Bubbe Susan exclaims.

“He’ll look really Jewish after I get done with him,” Kogen says, as nervous titters spill from friends and family.

Time to the light the candles, but Ryan’s big brother is still off watching Sponge Bob. Two relatives are dispatched to fetch Alex. Meanwhile, Ilona’s friend, Mona Siegel, reads a poem to Ryan “on this, the second of many significant days in your life.” Alex arrives, but runs off when asked to light the candles. Grandpa Jack ably fills in as candle-lighter, while Marc gives a brief speech.

Kogen then recites, first in Hebrew and then in English, passages from the Torah about how Abraham circumcised Isaac on the eighth day after his birth. After Marc and Ilona recite, “Joyfully do we present our son to the covenant of circumcision,” the room becomes quiet.

Ryan is back on the pillow in front of Kogen and the tension seems so thick that you could cut it with, oh, never mind. Kogen solemnly unfolds his metal instruments, then sighs audibly.

“Hmm, let’s see if I remember how this is done,” he deadpans, and the room erupts in laughter.

All part of the shtick, folks.

Marc, Ilona and Bubbe Susan circle Kogen and lend a hand in holding down Ryan’s arms and legs.

“Talk to your son,” Kogen advises Ilona. “Tell him not to pee on the mohel.”

At last, Kogen starts the 30 second surgical procedure. An awkward silence engulfs the room. It doesn’t last long, though. Ryan now is awake and wailing, which Kogen cautions is to be expected. A glance around the room shows that most guests are wincing or looking away, and some are sipping at their cups of kiddush wine even before the final benediction. Ilona gently caresses Ryan’s cheek, while Bubbe Susan murmurs, “Oh, Ryan, my baby, I’m ssooooo sorry.”

In no time, it seems, Ryan is cut, swabbed and wrapped in gauze. His diaper and outfit are refitted. He’s back in Ilona’s arms and no longer crying. Kogen looks up at the crowd, clasps his hands together and says with mock seriousness, “OK, guys, who’s next?”

After the final benediction, and a round of robust “mozel tovs” (congratulations) with the wine, the guests repair to the kitchen for the feast.

Bubbe Susan again clutches little Ryan, who has once more fallen asleep. That’s understandable after such an eventful half hour which, thankfully, he will have no sense memory of as he gets older.

Sam McManis is a staff writer for the San Francisco Chronicle. You can email him at smcmanis@sfchronicle.com.

My Son’s Bris: Why I Was Not Prepared for This 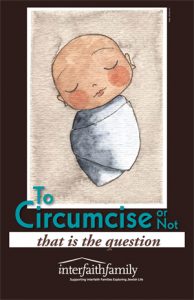 Approaching a Baby’s Bris as an Interfaith Couple

Merging the Jewish with the Non