At just nine weeks pregnant, my doctor ran a blood test and we waited on the results, full of anticipation. When they came back, we found out our baby was a healthy baby boy! Seeing is believing for me, so I waited until the anatomy scan to be sure we needed to start preparing for a boy. Sure enough, the blood test didn’t lie.

Our first baby was a girl, so after the birth, there was no rush to pull off a Jewish lifecycle event. We had done a simchat bat (also called a brit bat) celebration for her (a Jewish naming ceremony for a baby girl), but it was almost two months after she was born, so we had already started to settle into a routine and we were somewhat rested. This time would be very different. This boy would have a bris on his eighth day of life, no matter when that would fall. For my Type A personality, it was going to be tricky to relinquish control.

I started planning right away, months ahead of time. I figured we wouldn’t have many attendees with the last minute nature of it, so I planned on holding it at home, unlike the simchat bat. The one detail I needed to really research was finding the right mohel or mohelet (the person trained to perform the ritual circumcision). 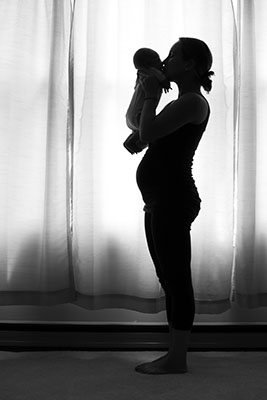 Because the majority of our family and friends are Christian, I wanted to be sure we found a mohel who had experience in interfaith settings. We needed someone who could explain the tradition well because for most people in the room, this would be their first experience with it. It was also important that some of our guests who were not Jewish could take part in ceremonial honors.

A few of the mohalim we reached out to required that the sandek (the person who holds the baby during the circumcision) be a Jewish male. I started making a list of all the Jewish men we knew, realizing that if one was not available on the eighth day, we would have to move on to the next. Of course, the majority of the list was out of state. My cousin seemed like the best fit, but if baby decided to arrive later than expected, my cousin would be away at college and I would have to fly another relative or friend in, or end up with someone we didn’t know well to hold the baby during his circumcision. This was not ideal and rather stressful.

I kept looking and reached out to a local JCC group of moms to see who they had used. One name kept coming up and it was a local mohelet. I reached out and she allowed anyone, Jewish or not Jewish, male or female, to serve as sandek, kvatter, and kvatterin (messengers who carry the baby from the parent to the mohel). She also fit the bill as far as my other requests were concerned: no nerve block injection, no restraining board, and a ceremony conducted in both Hebrew and English. I was really hopeful she would be available on the right day, but found a backup mohel who had similar policies. His only difference was that the sandek had to be Jewish, but not necessarily a Jewish male. We could make that happen if needed.

Baby boy was born 12 days late and within hours of his birth, I reached out to my top choice mohelet. Luckily, she was available. As I had imagined, we had very few Jewish attendees and no male Jews. We were able to honor loved ones, regardless of religious affiliation and they enjoyed being able to take part in such a momentous occasion. We named the baby for my deceased grandfather, while my grandmother held him. It was a really beautiful ritual and we were so pleased with the mohelet and the ceremony she performed.

After she left, we ate a meal with our guests and we kept hearing how much everyone enjoyed the ceremony. Most came up to tell us they had never been to a bris and didn’t know what to expect. I had been most anxious about it being strange and foreign to our guests, so I was relieved at the comments about it being a beautiful occasion. One of my aunts put it best when she said that she had her sons circumcised at the hospital and after witnessing this bris, she wished her boys could have been in loving arms, surrounded by loved ones, the way our boy was.

Though it was quite a process to find the right mohelet for this bris, I am so thankful we found one who could cater to our unique wishes. She gave us and our guests a memorable and connected occasion as we celebrated this new light in our lives.

Sarah Rizzo lives in Southeastern Massachusetts with her husband and their two young children: a preschool aged daughter and toddler son. She stays at home with her children and runs a bump through baby photography business. When she’s not busy chasing after her kids or working on photos, she enjoys writing, baking, crafting, and reading.