It’s Not Only About the Kids

The first commandment in the Torah is to be fruitful and multiply. Judaism takes that very seriously. One blog sums it up this way: “Jewish mothers like to bug their kids about ‘hurrying up and getting married and giving me some grandchildren already before I die because I’m not going to be around forever you know my health isn’t what it used to be.’” Judaism is so concerned about the next generation that in some families, anything and everything is forgiven as soon as there are children involved.

We come by this emphasis on children honestly. Judaism is a small minority and there is profound panic that a people with a deep history, wisdom and beauty will die out if we don’t procreate like crazy. For a tiny tribe to grow to survival, and then withstand the many historical trials we have endured, reproducing ourselves at a rapid rate has truly seemed a necessary component of our survival. Now, more than ever, the pressure is mounting. More of us who do want kids are delaying until later in life, facing more difficulties getting pregnant and having fewer of them. Some Jewish leaders have made it their mission to encourage people to marry younger and start bringing in the babies. So I know I’m going against the grain of thousands of years of Jewish thinking, and contradicting scores of contemporary Jewish thought leaders. But I have some serious fears about our procreation-obsession.

Here are my top 4 reasons we should ease up on the pressure:

1)  Many people don’t want children. And who would want a person who doesn’t want kids to actually become a parent? Childrearing is tough enough even if you really wanted them.

2)  Some want them…but not yet. By pushing women to find mates earlier and start reproducing, we are reversing decades of feminist progress that afforded women a wider array of choices about childbearing. 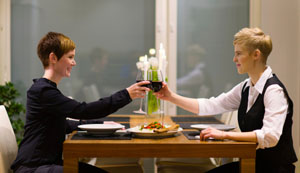 3)  There are so many who cannot have kids, due to fertility challenges, societal, economic or other personal issues. Within the LGBT community, although it is far easier than it once was, having kids can still be challenging.

4)  Finally, I believe the emphasis on children has great implications for interfaith couples. When a couple from different backgrounds is pondering questions about religion in their home, often the first thing we ask is, “Will your children be Jewish?” How we ask this question is crucial. I am a huge proponent of couples exploring this question long before there are children. I have seen countless families struggle because they avoided these tough conversations when it was still hypothetical. But more often, the tone of this question is one of urgency: All is not lost if we can make sure the kids are Jewish.

The results of this pressure are manifold. People who choose not to or cannot have children are left to struggle with their sense of purpose Jewishly. Not having children can be a source of pain and even a feeling of rejection from Judaism.  Some who do have kids don’t know why they should raise them Jewishly because they don’t know for themselves why Judaism is important.  This can even affect those who do raise their kids in the Jewish tradition. I remember a feisty and resistant bar mitzvah student asking his parents point-blank why Judaism was important to them. They were dumbfounded by the question.

My overarching fear is that Judaism appears more concerned with our survival than perpetuating something worth keeping alive. We pay an inordinate amount of attention to “pediatric Judaism,” the overemphasis of the child’s experience of Judaism. Don’t get me wrong—I strive mightily to make Jewish holidays, rituals and values engaging for my own kids and in my teaching in the Jewish community. It is crucial to introduce children to an active, relevant and joyful Judaism that will carry them through a lifetime of meaningful Jewish connection. This is a central piece of my work, and I love and value it. But I fear that while we are fretting about the kids, we sometimes forsake adults’ spiritual journeys.

If Judaism is to survive, it is often times because an adult discovers that it is centering to light Shabbat candles after a long day at work on Friday night as she takes in the warmth of the fire. It is because an adult who loses a parent finds that the Jewish shiva rituals give him the time and space he needs to mourn. It is because an adult finds a community with which to celebrate, learn and argue. This is not to say that kids cannot also discover those experiences for themselves, but the vast majority of the time, it’s the adults who will feel compelled to pass on Judaism because it is a frame for the values they are trying to live and instill in their kids if they have them. Those kids will see their parents engaged and fulfilled by Jewish ritual, activism or conversation. What they will preserve is a meaningful tradition that enables them to live life with more depth, inquiry, and intention.

You matter. You, the adult reading this blog, matter. Your spiritual journey is important and of immense value. Your questions, brilliant insights and challenges are part of the continuous unfolding of the Jewish story, whether or not you were raised in this tradition. It’s not only about the kids.