Inside Intermarriage: A Christian Partner’s Journey Raising a Jewish Family 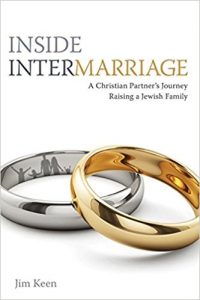 August 1, 2017 is the publication date for the new version of Jim Keen’s Inside Intermarriage: A Christian Partner’s Journey Raising a Jewish Family. I was honored to write the foreword to this one-of-a-kind book: the warm, personal, light-hearted but very serious story of a Protestant man raising Jewish children together with his Jewish wife.

When Jim Keen and his fiancée Bonnie were planning their wedding, her Jewish grandmother wasn’t sure she would attend, because she disapproved of intermarriage. But she chose love, and danced with Jim at the wedding, saying “you’re my grandson now.” That story brought tears to my eyes, and it and others in this book might to yours.

Interfaith couples like Jim and Bonnie who care about religious traditions face what I call “eternal” issues. Not in the sense that the issues can’t be resolved, because they can be, as Jim’s story vividly demonstrates. But all interfaith couples who want to have religion in their lives have to figure out how to relate to each other and their parents and families over religious traditions; they all have to resolve whether and how to celebrate holidays, to be spiritual together, to find community of like-minded people.

This book follows Jim’s journey through all of those issues. From dating, falling in love, meeting the parents, deciding how children will be raised religiously, considering conversion, to getting married; from baby welcoming ceremonies, to celebrating holidays, finding community, and meeting his own needs in a Jewish family. It’s a deeply moving story, told with humor, and it’s an important one.

Jim Keen’s example of one interfaith couple’s journey to Jewish continuity is reassuring. Interfaith couples who are or might be interested in engaging in Jewish life and community can learn from Jim’s story how doing so can add meaning and value to their lives.

Along his journey, Jim shares extremely helpful insights. For example: His and his wife’s feelings and attitudes changed over time, with him moving from feeling different, “standing out,” “not belonging,” to feeling “part of.” For another: Interfaith couples, no matter what path they follow, have to make a conscious effort to work out their religious traditions, which can lead to more thoughtful and deeper engagement. And another: Interfaith couples aren’t alone, and it’s very helpful to become friends and work through issues with other couples.

Interfaith couples follow many paths, and Jim Keen doesn’t say his path is right for everyone. He continued to practice his own religion; some partners in his position don’t practice any religion, or practice Judaism, or even convert. Jim and his wife chose one religion for their children; some couples decide to raise their children in two religions, and many couples haven’t decided, or haven’t yet. The clear advice Jim does give is that there are solutions to the issues that interfaith relationships raise, and that the key to resolving them is early and ongoing respectful communication. How Jim spells out the negotiation and communication he and his wife had over many issues will help couples facing the same issues, no matter what paths they may be thinking of taking.

Jim expresses deep gratitude for finding very warm and welcoming JCC preschool and synagogue communities, and especially a rabbi by whom he felt genuinely embraced. It is essential that more interfaith couples experience that kind of welcome. Most Jews have relatives in interfaith relationships now, and many Jewish professionals are working with people in interfaith relationships. This book promotes better understanding not only of the eternal issues interfaith couples face, but in particular the perspective of the partner from a different faith background.

Jim Keen doesn’t promote interfaith marriage, but he does recognize its positive impacts, including an appreciation for tolerance and diversity. He writes that being in an interfaith relationship has broadened his perspective and enhanced not only his life, but also his parents’ and in-laws’ lives too. He still enjoys “belonging to [his] Scottish-American, Protestant group, but it’s a warm feeling being able to see the world through Jewish eyes, as well.” He also rightly recognizes his and his family’s contribution to the Jewish community: “I am proud to say, there are some Keens who happen to be Jewish. I love it.” I love it, and I think you will, too.

Today, with intermarriage so common, Jim Keen’s perspective is more important and valuable than ever. Jim Keen and his family – on both sides – are heroes of Jewish life. They are role models for how a parent from a different faith background and a Jewish parent, together with all of the grandparents, can support the Jewish engagement of their children and grandchildren. They all deserve deep appreciation for this utmost gift, Jim especially for shedding light on the journey.

You can order the book here.