In Our Love Story, Timing Was Everything 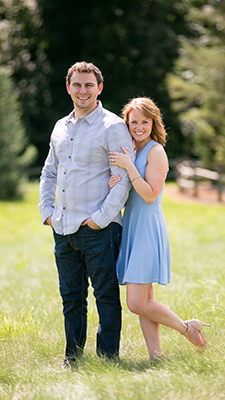 It has been said that timing is everything. This belief is especially true for the evolution of my relationship with Jarrett over the last six years.

I first met Jarrett in February of 2010. Our encounter was brief. I was a junior at Penn State University and out with a group of girlfriends one night. I ran into Jarrett and his friend on my way to the bar. They introduced themselves, we exchanged a few words then I continued on as usual with my evening. Just another night out in State College…or so I thought.

A few weeks later, I was out to dinner celebrating my roommate’s birthday. Toward the end of our meal, I received a text from a friend. She said they were at a bar around the corner and that I should meet them after dinner. Now, it was a Wednesday night. I had a tough course schedule that semester and didn’t love the idea of staying out late on a weeknight. I told her I was tired and didn’t think I was going to make it. She responded with, “but there is someone here that wants to see you.” Curiosity got the best of me and after all, it was Saint Patrick’s Day. Being a redhead of Irish descent, I couldn’t disappoint my ancestors on this holiday, right? So, I finished up dinner and headed to Café 210 West.

When I approached my friends, I noticed there were a few boys with them and right in the center of the group sat Jarrett….timing is everything, right? I learned that a few of his fraternity brothers were friends with a group of my girlfriends. I was still skeptical. I mean, he was a fraternity boy (which must mean trouble) and a senior getting ready to graduate. I thought he would have no interest in dating. But, as I sat with him that evening, I learned that he was funny, confident and kind. We talked and hung out in the weeks leading up to his graduation. He even asked me to be his date to his Senior Fraternity Formal! But we never talked about our status as a couple.

After he graduated, we went our separate ways. I moved back in with my parents for the summer in Gilbertsville, PA, and he moved back in with his mom in Cherry Hill, NJ.  I thought for sure we would fall out of touch. But one summer day, he asked if I wanted to go on a date. We saw each other every few weeks after that and officially started dating! As we got to know each other more, he learned that I was raised Catholic and I learned that he was raised Jewish. This wasn’t anything new for me as I had a Jewish roommate in college who taught me the basics of Jewish traditions. Also, while I would say I’m a spiritual person, my Catholic faith background wasn’t the only thing that defined me. Plus, I liked this boy! And who knew where our relationship would go? I was only 21 years old at the time and wasn’t planning for marriage.

The following three years meant long distance for our relationship. I finished my senior year at Penn State, graduated and moved to Maryland to complete a dietetic internship to become a Registered Dietitian. He started his career in sales in New Jersey. Throughout the long distance, we strengthened our relationship through milestones such as meeting extended families and celebrating different holidays together for the first time including Passover, Easter, Rosh Hashanah, Yom Kippur, Hanukkah and Christmas!

In the summer of 2013, we decided it was time to fix the distance between us. We started talking more about our future together and had some of the “tougher” conversations about things like where we should live, finances, marriage (more about that later) and children. In September of 2013, we made an offer on our first home in Cherry Hill, NJ.  I was offered a new job in Philadelphia (a short drive away) on the same day that our offer was accepted…they say timing is everything!

Just in case we didn’t have enough responsibility as new homeowners, we decided to adopt a golden retriever puppy in September 2014. We named him Nittany after our beloved alma mater.  On March 20, 2015, Jarrett, Nittany and I took a road trip back to Penn State for a mini-getaway. Upon our arrival, we stopped for a quick family photo-op at the Nittany Lion Shrine and to my surprise; Jarrett got down on one knee with Nittany as his witness and proposed in the place we had met almost five years to the day…timing is everything!

We will tie the knot in an interfaith ceremony in October 2016. I look forward to sharing our interfaith wedding planning journey!