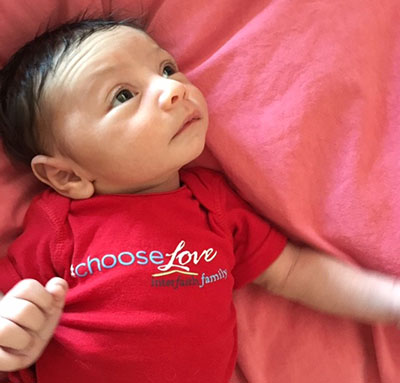 Like his other mother, my 4-month old son Sam is Jewish. I am not. I was born and raised Catholic. My mother and her sister converted to Catholicism while attending the Catholic schools that offered a better education to black families than the separate but equal public schools in the segregated South. My mother went to mass every day and, after she died, the congregation at her local church planted a tree in her honor outside the front door. My aunt (her sister) regularly serves communion at Sunday mass. My father’s family has been Catholic for generations—his cousin was Mother Superior of a convent of black nuns in New Orleans. My Catholic background was such a point of pride for me that, even after agreeing that our son would be Jewish, I still wanted to name him Ignatius Xavier in honor of the founders of the Jesuits.

With this history, I wasn’t sure what to expect when I told my family that Sam was going to be Jewish. I was especially concerned about my father. Dad’s family is Louisiana Creole. For him, being Catholic is not just about religion. It’s a core part of his identity, as integral to his sense of self as being black and from Texas. Sam was already biracial and a native Californian. I was afraid that when Dad learned that Sam was going to be Jewish, he might decide Sam was too different to be his grandson.

To my surprise, my father was not only accepting, he was also enthusiastic. And full of questions. Why was Sam going to be Jewish? How could my baby be Jewish if I’m not? Was he going to be baptized Jewish? What were the Jewish holidays? It was a bit overwhelming. Figuring that it would be better to let him find his own answers, I asked Rabbi Keara Stein for book recommendations.

Dad came to visit Sam for the first time a week ago. When he called before the visit, he mentioned that he had read the books. Judaism had made a strong impression on him and he was “excited” that it was going to be a part of Sam’s life. He liked the Jewish sense of community and the rituals, but most of all he liked how, as he described it, Judaism emphasized study over knowledge. “I feel like that really resonates with me,” he said.

I suggested that he join us for Shabbat dinner while he was in town. (His text message response was “I’m down w/‘Shabbat’ after I look up what it is.”) We also invited my cousin, who just moved to LA, and my mother’s brother, who happened to be in town. So my father experienced his first Shabbat with his grandson, surrounded by family. It was the first time he had ever shared a family meal at my house. It was also the first time he ate challah, which he thoroughly enjoyed.

At his suggestion, he and I took Sam to services on Saturday morning, where, after seeing me navigate the prayer book, he asked if I knew Hebrew. (“Not really,” I answered. “But it’s OK to just la la la if you don’t know the words.” He laughed.) Driving home, we talked about what to expect at Sam’s bar mitzvah. And he finally asked an easy question. Dad wanted to know why Sam didn’t have my last name. “Easy,” I said. “Our name is Bacon. That’s just not very Jewish.”

Before he left, my father told me how much he enjoyed his trip, even the two hours we spent at services. Looking back, it might have been the best visit we’ve had as adults. Talking about Judaism made for some of the longest and most personal conversations we’ve ever had. And his curiosity gave me a chance to think more deeply about what it means to raise our son in our Jewish community. Dad’s parting words were a request that I let him know when holidays were coming so he could be prepared. Perhaps I’ll give him a call for Shavuot.