Ignore the Shrimp on the Buffet

If you’re checking your trusty Torah for kosher laws, you’ll notice that right down the page from telling us all the animals that we may eat must chew their cud and have split feet, it clearly states, “anything living in the water that does not have fins and scales is to be regarded as unclean by you.”  I understand. This means shellfish.

I understand it, but I don’t obey it. Though this little piggy stays out of my icebox, I am rarely without a bag of bottom feeders in the freezer. I buy turkey bacon, turkey sausage, occasionally sliced turkey ham. But there is no substitute for those succulents of the sea: it’s the real thing for me.

I don’t know quite how to explain this to my wonderful Christian mother-in-law who gave up cooking a Christmas ham the first year her son brought me home for the holidays. Is it wrong to pray that her Bible study class will not be focusing on Leviticus any time in the near future?

I eyeball the Red Lobster parking lot for my neighbor’s car before lunching there. This lovely Mexican woman always makes it a point to make a batch of chicken tamales for me, in addition to her favorite pork recipe, whenever we gather for block parties. I’m touched by her thoughtfulness and wouldn’t know what to say if she caught me in the midst of the Mixed Shrimp Special.

I don’t mean my shellfish consumption as a sign of disrespect. Our Lord and Maker considered them to be unclean in his infinite wisdom, so he must have had his reasons. But let’s remember that Cajuns had not yet been invented, and he never got a chance to go back and add a footnote that swimming in a roux would cleanse them just fine. 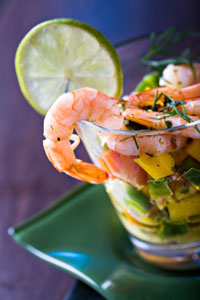 Ok, it’s not just gumbo and etouffee in my menu rotation. I’ll eat shrimp any way Forrest Gump can think of. I love them equally in Chinese food, enchiladas, and pasta. I’m an equal opportunity shellfish sinner. I also span the species – shrimp, crab, clams, oysters – I love them all.

And I’m not alone. Maybe it’s a Southern thing, but my shul (temple) holds an annual “Bug Boil” to welcome new members. The crawfish are served in a member’s backyard, not at the temple. This is probably as much a space issue as a kashrut issue – it’s a very popular event. Perhaps we would feel just a little awkward telling the newbies to “shuck it, pluck it, suck it” just down the hall from the sanctuary. We do offer vegetarian food alternatives to those who do not care to partake, but most folks are avoiding the cayenne more than the creatures themselves. Although, I guess it makes sense that anything nicknamed “mudbug” is not going to be considered clean.

An impromptu survey at my last synagogue sisterhood dinner divulged that many of my “sisters” also avoid the other white meat, but chow down on the lovely orange. What is it that makes us so obedient to one kosher law, and so dismissive of another? Maybe it’s historical – there are references from more anti-Semitic times of hidden or closeted Jews being tested by being offered pork. But I don’t recall anyone in the Middle Ages creating suspicion by turning down lobster thermidor. The taboo seems to go back even further in time, as anthropologists have reported finding remains of shellfish in Israeli archeological digs, but none of pig bones.

The cultural taboo may have been a health issue. Perhaps ancient medicine men understood where trichinosis came from, but weren’t familiar with a shellfish counterpart. It is a lot quicker and easier to fully cook shellfish than pork. And I’ve tossed back many a raw oyster with no digestive problem whatsoever.

My own Jewish mama, who would summon up guilt overdrive for any family member serving pork, will just ignore the shrimp cocktail at the New Years’ buffet. If anyone offers her any, she’ll just mumble something about shellfish making her sick. She does not mean that consuming it will trigger anaphylaxis, she just means that remembering what she spent on my kosher bat mitzvah dinner, only to see the family scarfing down the treyf (non-kosher food) years later, nauseates her.

We do recognize her as expert on sickening food. Never one to see the point in following a recipe word for word, she has been known to make casseroles, main dishes and appetizers without using a single spice and has even been caught boiling ground beef. Rest assured, her dishes are kosher, but are they less of an abomination?

Meanwhile, I’ll continue to surrender to my weakness. Boiled, broiled, baked, sautéed, but never kosher – shrimp, the “fruit of the sea.” Say, do you think that’s the fruit with which Eve was really tempted?

Joy Fields is a CPA in Kingwood, Texas, who enjoys writing. Her humorous essays and poems have appeared in publications such as The Houston Chronicle, Writers’ Digest, and The Wall Street Journal. This year, she will be celebrating her 20th anniversary in an interfaith marriage.