Eyes on the Prize

I love when my kids come home from school with inspirational materials. This week, with MLK day on everyone’s mind, it was to honor the great Reverend Martin Luther King Jr. Found inside my 1st grader Eli’s backpack was a scholastic news weekly reader called “Before and After Dr. King,” emphasizing how MLK had helped change unfair laws in his lifetime. This little flyer highlighted three topics featuring before and after photos: Buses, schools and water fountains which clearly and visually showed the inequality and horrific level of prejudice in daily life in the south in the ’50s and ’60s.

So we had a kitchen table discussion, and I found myself getting teary-eyed, as I often do at the thought of being separated and judged for who you are by the color of your skin or boxed into feelings of shame for what you were born into. My kids are blown away that people were treated so unfairly. Eli found it fascinating that I was born in 1969, “way back then only one year after Martin Luther King died.” We talked about how hard it is to believe that people couldn’t sit together or learn together or share the same water fountain; things I did not have to witness in person, thank God, being way up north and born after the civil rights movement had a chance to flourish.

“Jews were treated unfairly too back then,” I explained to Eli.

“Why does it always have to go back to the Jews?” my wife bemoaned, “Can’t we just stick with MLK?” (It’s got to be tough to be married to a Jewish educator with every topic coming back to Judaism at his kitchen table.)

“I’m just saying,” pointing to the picture with the separate seating on the buses, “there were also signs back then that said, ‘No Jews Allowed.’ Of course, it was nothing compared to the horrors that faced the Southern black community at the time, but there are similarities. Deb gave me that “Lets not bring this back to the Holocaust” look, knowing all too well where it was heading. I got the message. “You will learn more details about this every year as you get older.” I tried to conclude my digression before Shalom Bayit had been compromised—again. 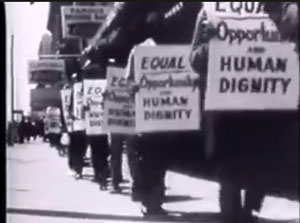 Mavis Staples, created one of the best civil rights songs of all time (and albums for that matter titled We’ll Never Turn Back in 2007), called “Eyes on the Prize,” telling us to “hold on,” and to keep our “eyes on the prize” of freedom.

We have come a long, long way as a more inclusive society (thank God) and prejudice needs to be fought wherever it strikes. There are many issues to hold on to as we keep our eyes on the prize. King’s vision to change the world began with color (or rather I should say a dream of not judging people by the color of their skin) and continues to grab our hearts and attention on opening our minds to all people who suffer and have been marginalized by society, “still vastly crippled by the manacles of segregation and the chains of discrimination.” (MLK, I Have A Dream speech, April 28th, 1963)

As of this writing, 17 states have legalized same sex marriage (starting with my home state of Massachusetts in 2004). And intermarriage is a fascinating because it is not an issue of legality from state legislation, but rather in issue of relational acceptance by denominations or complex family dynamics.

Going through the list of rabbis who are willing to officiate marriages on this website, I am struck by their level of heroism to stand up for change and inclusiveness, despite the slowness of many congregations and some of their peers.

Things are evolving and getting better, no doubt. It is wonderful to see same sex marriages continuing to be recognized and officiated by rabbis in synagogues. But somehow, interfaith marriage has a bigger hurdle to overcome in acceptance on the institutional level. For example, the Conservative movement has a doctrine to not allow their rabbis to even attend an interfaith marriage, let alone officiate one.

You have probably heard about the small, but still existent, ultra-Orthodox factions that are pushing for separate buses for men and women. Oh Dr. King, how did some of us get so far off? It is deeply embarrassing to see people miss the mark in respecting others’ differences.

In the meantime, this year I will be watching for more synagogues to be more inclusive and welcoming to more intermarried couples. I want my children to grow up witnessing synagogues and Jewish institutions working to make a stronger community of unity and respect.