Does Spirituality Have to Mean God? 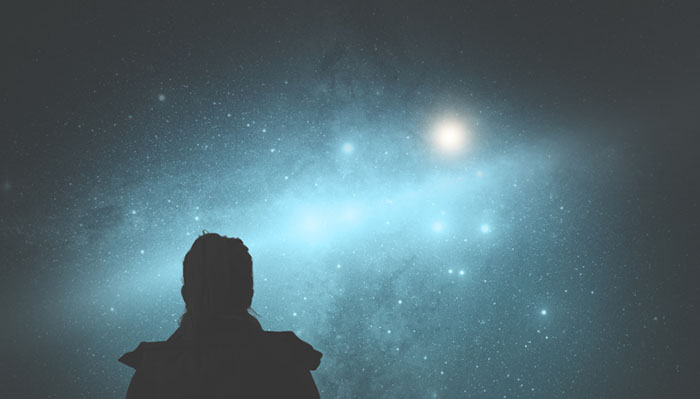 Last week, my son started wondering about the edge of the universe. What is at the end? Is there an end? What does the word “everything” really mean? Is there anything outside of “everything”?

I could tell as we talked that his mind was trying to expand enough to picture our expanding universe. We weren’t just talking big. We were talking about something larger than our imaginations could hold. He was awe-stricken.

Rabbi Abraham Joshua Heschel wrote, “Our goal should be to live life in radical amazement… To be spiritual is to be amazed” and, “Wonder is an act in which the mind confronts the universe.” Sometimes we are privileged to experience or think about something that religious mystics would say lifts the veil, exposing something deeper, clearer or more intense about the universe and our place in it. At those moments, we become overcome by a sense of the grandeur of life that is hard to describe. Religious writers would say it is ineffable, impossible, to convey in words.

When my son had this experience, we wanted him to know that some people call that expansiveness, that interconnectedness, or that feeling he was having—G!d. The medieval Kabbalists called that expansiveness, “Eyn Sof,” literally describing G!d as “Endlessness.” But do we need religion to feel that sense of being connected to the entire universe? Do we need to call it G!d?

Of course not. Some people may label such experiences “holy,” “miracles” or even “G!d,” while many others would not. Richard Dawkins, contemporary atheist and scientist, imagines himself as a child lying under the stars, “dazzled by Orion, Cassiopeia and Ursa Major, tearful with the unheard music of the Milky Way” (The God Delusion, p.11).

Although no two experiences of awe are alike, the feeling of interconnectedness and awe in the face of the vastness of the universe Dawkins describes is akin to the writings of many mystics across religious traditions. He wonders in the book why he could have such an experience and become a scientist while his friend could have that same type of experience and go into the priesthood. This is his premise for undoing religion. For me, his observation only reinforces that it doesn’t matter what we call it. His friend called it G!d. He didn’t. Why should it matter, when what is truly important is that they both had an expansive experience of awe as young children? They both went on into lines of work where they could cultivate that skill, living in awe of the universe. For Dawkins and the rest of us, those moments of clarity can influence the way we live our lives.

Dawkins is far from being alone. According to a Pew Research study, a rising number of Americans across the religious spectrum report that they often feel a deep sense of spiritual peace and well-being as well as a sense of wonder about the universe. But what is more surprising, especially since fewer and fewer Americans affiliate themselves with any religion, is that a rising number of atheists also reported feelings of wonder about the universe. That number rose from 37 to 54 percent from 2007 to 2014, which means that their sense of awe is even higher than those within some religious traditions.

What has changed for atheists that they are reporting a sense of increased wonder? Perhaps one of the reasons that the “nones” and atheists are finding awe is that it has become clear that wonder in no way negates the intellectual, the scientific. For Dawkins, a feeling of “becoming one with the universe” is eventually tied to his reverence for science.

The 20th century Jewish thinker, Aaron Zeitlin, warns us in a poem that if we look at the stars and yawn, then we have been created in vain. Although Dawkins rejects any religious explanation of his experience, he would never look at the stars and yawn. In the words of sociologist Ryan Cragun, “It could be that those who are now admitting they are atheists … are also more willing to admit that they do experience what many people consider ‘spiritual’ feelings. Perhaps normalizing “atheism” has benefitted those seeking non-religious language to express wonder.

We certainly do not need religion to feel a sense of the grandeur of life and the universe. But religion at its best is about the cultivation of awe. Embedded in most religious traditions is a deep sense of wonder, and an examination of the self in relation to the vastness of the universe. We all begin life with innate curiosity, but where is that ability to live in awe cultivated as we grow up? Our religious spaces could—and should—be the places we take those questions that shake us and challenge us. Not to answer them, but to provide the space to wonder. And religious practice can serve as a catalyst to invoke these feelings. Many religious rituals are designed to lead us to those spaces of awe and wonderment on a regular basis, and encourage us to feel gratitude at the magnificence of the universe.

Judaism has a blessing for everything, from the appearance of a rainbow or an unusual sight to the seemingly mundane, daily miracles of eating food and using the bathroom (yes, that is truly awe-inspiring when you think about it). Daily life is filled with large and small moments of awe. Amidst the busyness of our everyday lives, from time to time we slow down for long enough that we are allowed to glimpse something deeper: the magnificence, the terrifying immensity of it all.

Because the blessings are associated with specific moments or acts, they are not allowed to pass by unnoticed. We learn how to better notice and embrace these moments. I hope to teach my kids not that one needs religion to feel awe, but that religious rituals and language can help us cultivate a sense of awe and express gratitude for the universe we live in. I want to give them a religious language to talk about wonder and perhaps to feel comforted by the fact that people have been feeling that sense of grandeur and awe for ages.

However you find your sense of awe, embrace it. Don’t worry too much about what you call it. But at the same time, don’t be afraid to seek it out within religious structures. You might find new language and more opportunities to discover your own Radical Amazement.

Note on the spelling of G!d’s name: Traditionally the divine name is written G-d. But here I use G!d to connote the idea that the divine is one way of expressing Radical Amazement.