Does Religion Dictate Where We Send our Daughter to Preschool?

I grew up in the same town where I currently reside. I remember going to high school with only a handful of other students who called themselves Jewish. I knew that raising my family in my hometown meant we would have to go to the very small synagogue in the next town over or if we wanted to be part of a larger community, we would need to drive 20 to 30 minutes north or south to more Jewish areas to find that. 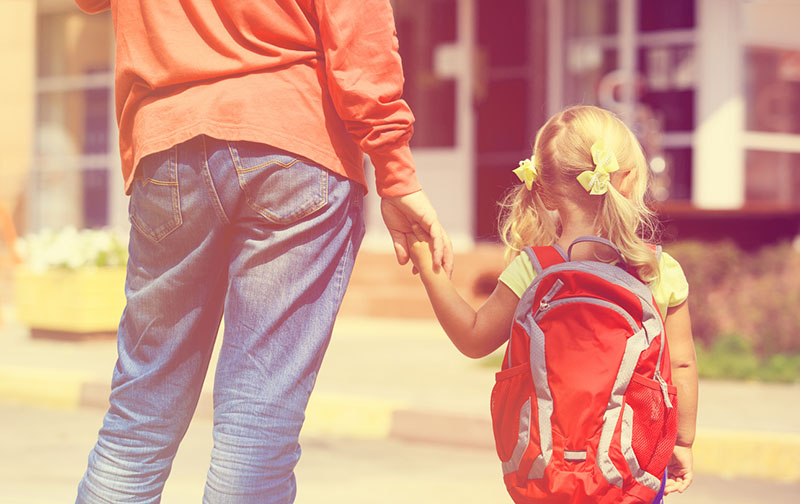 It never crossed my mind that we would run into the issue of being the minority in what I thought would be a simple search for a preschool. Admittedly, I was a bit late in my search, thinking that with a baby due at the end of August and the school year starting in early September, I might want to hold off on sending my daughter to preschool to avoid her having too many changes at once. It turned out that she really wanted to go to school, so who was I to keep that from her?

With the limited openings available to those of us who started our search late, I found that there were very few secular schools with openings. There was one within walking distance, but it only had openings for the afternoon session, which I thought may not be ideal for a still-napping toddler. My daughter toured the school with my stepmother and they both absolutely loved it. But I was unable to make it to the tour and was still apprehensive about sending her to school during prime nap time.

My search had to broaden. The Jewish preschools, like the Jewish communities, were quite a drive from my house, so it seemed unlikely for that to work out as we readjust to life with a newborn again. A highly recommended preschool in our area with morning openings just happened to be a Christian preschool. I scheduled a tour and reached out to the InterfaithFamily Facebook group, “Raising a Child with Judaism Participants and Alumni,” to ask whether other parents would send their children to a preschool of a faith other than Judaism and what kinds of questions they would ask on a tour.

The post had some lively discussion and I found that resource very helpful in gathering my thoughts, both before and after the tour. I went into the tour thinking I would be OK with the education if the religious component was strictly value-teaching. When speaking with the director, I asked whether they’d had students of other faith backgrounds in their school before. The comforting answer was a “Yes, we’ve had Hindu and Jewish students in our school before.”

We started moving through the motions of a typical day, and while my daughter happily played and worked on a craft with the other children, I asked about prayer time and the Bible stories that they read. It turned out that the Bible stories were sometimes familiar ones like Noah’s ark, but at other times, they pull from specifically Christian liturgy. They also do an annual Christmas pageant and talk about the story of Easter. I left the tour thankful to have had the opportunity to ask those questions, but feeling unsure about the school.

I went home, talked to my husband about it, and thought it over. Yes, even if we chose a secular school, she would be exposed to Christian holidays. We are an interfaith family, so she will be exposed in our own family’s celebrations as well. However, teachings of Jesus would not be a part of a secular school’s curriculum. With that in mind, I scheduled a second tour of the neighborhood school with afternoon openings. My daughter jumped right into all of the activities again, already feeling like this was a familiar place. My husband and I asked lots of questions and they were all answered the way we hoped. It felt right, despite the fact that it would mean missing naps two days a week. We took home the registration paperwork and I got started on it right away, so we would not miss out on the few remaining openings.

In the registration packet, I was thrilled to find a questionnaire on celebrations and holidays. The questions were excellent, with sensitive wording and dug much deeper than I would have expected. The questions included the following:

What special days do you celebrate in your family?
How would you like our program to be involved in your celebration?
What are some of the myths/stereotypes about your culture that you would like us to understand so as not to perpetuate them?
How do you feel about celebrations at the center that are not part of your family’s tradition?
What kinds of things can we do to celebrate our center as an inclusive human community?

This put my mind at ease. I answered each question thoroughly, probably with more detail than the school is used to, but this was of utmost importance in my preschool search. I want my daughter to understand and appreciate that other families may have different celebrations and beliefs than we do and I want her to be able to share some of our traditions with her new friends. This school will allow for both, and to me, that is the perfect setting for her first few years of schooling.

Sarah Rizzo lives in Southeastern Massachusetts with her husband and their two young children: a preschool aged daughter and toddler son. She stays at home with her children and runs a bump through baby photography business. When she’s not busy chasing after her kids or working on photos, she enjoys writing, baking, crafting, and reading.