When Cousins Think They’re Too Cool to Be Jewish

Jane Larkin
Read more
1389
May 4, 2015
This article was reprinted with permission from The Forward.
The Seesaw was a popular advice column in which a broad range of columnists addressed the real life issues faced by interfaith couples and families. This edition of The Seesaw features 18Doors CEO Jodi Bromberg and Parenting Blogger Jane Larkin. Click here to read the rest of the responses. 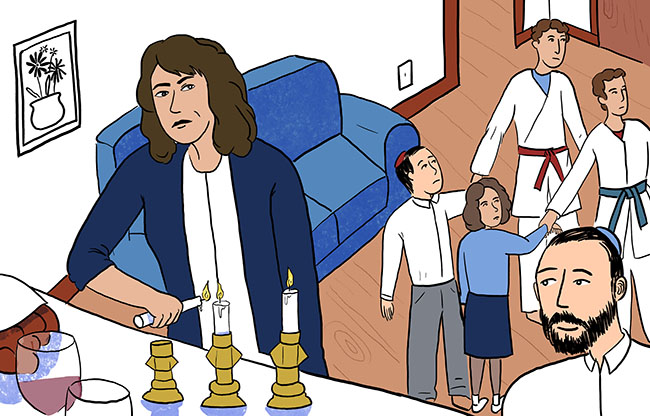 My sister married out to a lovely man and seems happy. I am an observant Jew, Conservative as we were raised, and her becoming less Jewish has not affected our relationship. We are still close.

In their house they do a little Judaism, nothing major, and also celebrate a non-religious Christmas and Easter. If anything, they are secular. In the past year or so her sons, 11 and 13, have started to gently mock the fact that our kids (girl 8, boy 10) are observant. They tell them that Shabbat is boring, that karate, or whatever else they are into at the moment, is more fun than Hebrew school, and stuff like that.

On one hand, kids will be kids. On the other hand, they are being disrespectful and children are impressionable, especially when it comes to the older, cooler cousins. Seesaw, how do I talk about this with my sister? The fact is, I think her children need, and deserve, a better Jewish education so they will understand what is behind it all. But I know I will sound judgemental. —More Kiddish, Less Karate

You Already Sound a Little Judgy

JODI BROMBERG: You are right: you will sound judgmental if you approach it the way you are considering. I suggest an alternate approach, which might lead to better understanding and communication between you and your sister. Start with respect: yours of her choices, and hers of yours.

Begin with language — instead of the pejorative “married out,” why not describe him as he is — a person of a different faith, or, if he is practicing, a Christian man? By using derisive language like “marrying out” or “marrying in,” you’re creating an unnecessary rift between the two of you.

You have an opportunity to begin a conversation with your sister about her family’s choices, and about yours. You say they “do a little Judaism,” and while it’s not the same level of observance that you’ve undertaken, maybe it’s the right path for your sister and her family. Just because your sister is less observant than you are does not mean that she is “less Jewish.”

If you can bring yourself to have a conversation around understanding — not trying to persuade your sister to make different choices than she’s made—you may end up closer. Have you asked her how she and your brother-in-law made decisions around their sons’ religious education?

Maybe she and her husband had long negotiations about the children’s religious education, like many interfaith couples do. Maybe she never felt that observance was an important part of “what is behind it all.” Or maybe, she hasn’t found a community that she feels like accepts her interfaith family as they are.

If you model respect and understanding, you can then use them as stepping stones not only to nurture your own relationship, but also to begin conversations between your children and nephews that hopefully will result in your nephews not undermining your choices.

Jodi Bromberg is the CEO of InterfaithFamily whose mission is to engage people in interfaith relationships in Jewish life, and move Jewish communities to welcome them.

This is a Teachable Moment

JANE LARKIN: The situation with your nephews is a “teachable moment.” Capitalize on the opportunity it presents to teach your sister’s boys about respect and your children how to stand up to teasing.

If you witness the interaction, speak with your nephews directly. Tell them that making fun of people’s differences isn’t something you tolerate. Remind them not to make jokes that perpetuate stereotypes. Explain that respecting your choices doesn’t mean that the choices need to be theirs.

Offer to answer their questions about Jewish traditions or education. Invite them for Shabbat so that they can learn about the celebrations that aren’t part of their home. Inform your sister about the incident and how you addressed it.

If you don’t witness the heckling, talk to your sister about what is happening. Focus on the issue of respect. Don’t discuss her children’s lack of Jewish education. Tell her that the comments seem like harmless fun, but they are disrespectful and intolerant of your practice. Ask her to speak to her children about respecting differences within the family and to model acceptance of your family’s different traditions.

Read the rest of this response here