Can Sports Unite the Jewish People? 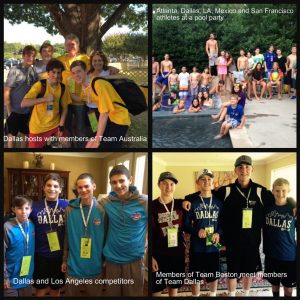 This past week, the JCC Maccabi Games were played in my city, Dallas. Dallas was one of three cities hosting regional games this summer.

The Maccabi Games are an Olympic-style sports competition held each summer in North America. It’s the second largest organized sports program for Jewish teenagers in the world and is part of the worldwide Maccabi Movement. Jewish kids, age 12-16, from all over the world compete. Thirty delegations competed in Dallas including ones from Australia, Mexico, Panama, Israel, and cities across the United States.

The games strive to instill a deeper understanding and appreciation of Jewish values in participants and strengthen their Jewish identity and connection to Israel. The other goal is to foster many of the same values as the Olympics–respect and sportsmanship, excellence on and off the field, and friendships that transcend gender, racial, ethnic, cultural, political and religious differences.

It’s the last of these values that I appreciate the most. Sure, there are kids from across the denominational spectrum competing but athletes from interfaith homes can participate too. The Maccabi Games’ definition of “Jewish” is having “at least one Jewish parent.” At the Maccabi Games, there are no half-Jewish, sort-of-Jewish, not-really-Jewish athletes. There is no one checking whether kids are matrilineal or patrilineal Jews. There is simply one kind of competitor, Jewish.

Matrilineal and patrilineal Jews compete side by side, as teammates and competitors. Children from wholly Jewish and interfaith homes share the thrill of victory and the agony of defeat. Reconstructionist, Reform, Conservative, Orthodox, nondenominational and unaffiliated; and those with high levels of Jewish engagement and little Jewish connection work and play together. All the labels that the Jewish community allows to divide us melt away at the games.

As an intermarried Jewish mom of one of the boys in the Los Angeles Westside delegation said, “We do the [Jewish] holidays, but my son never had a bar mitzvah. The generosity of spirit, of acceptance, was wonderful. No one treated him differently.”

At other times, differences were celebrated. A friend who hosted two basketball players from Australia told me with excitement about how they discovered at Shabbat dinner that the tune for the Hamotzi, or blessing over the challah, was not universal. She and her family were delighted to learn the Aussies’ melody.

To me, these things are what make the event magical. They remind us (or should remind us) that there is more that unites us than divides us. Yet, as a community, we still spend so much time focusing on what makes us different and quantifying and measuring who is really or more Jewish. If we understand the power of respect and acceptance to build Jewish identity and connection, why do we allow the differences to separate us?

I don’t know the answer. But I hope that these athletes, who are part of the Jewish future, will grow up to challenge the rhetoric. I hope they will see the rich diversity of the Jewish people as positive. I hope, that because of this experience they will work to create a more inclusive and united Jewish community.