“I don’t think being with someone who isn’t Jewish compromises my Judaism.” I said to my fiancé on our first date. “As long as my partner is open, tolerant and willing to learn about my traditions, I can’t say it would be a huge issue.”

He had asked me whether I was OK with dating someone who wasn’t Jewish and how I reconciled that with my beliefs. Our original plan was to play pool, but instead we ended up sitting and talking for four-and-a-half hours about everything that you’re not supposed to talk about on the first date. At that point, we had most definitely broken the cardinal rule of first dates by discussing politics, religion and children. Let’s just say that I’m not great at being subtle and knew it was a good sign that he didn’t try to flee the scene.

I met Andy when we were working on the same project at a consulting firm in Washington, DC. Our first non-work related conversation occurred after our building was evacuated during the district’s earthquake in 2011. We bonded over our shared anxiety about using public restrooms. Afterwards, we began to speak more frequently and eventually began dating. 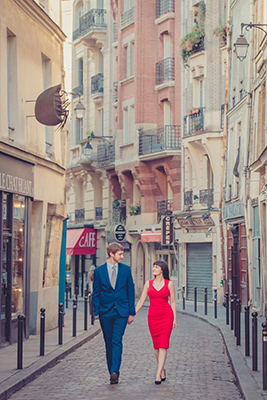 dialogue. As we became closer and our relationship grew more serious, we learned to traverse our religious differences together. I am a Ukrainian Jew who identifies most with Conservative Judaism. While I am not shomer Shabbat (I do not keep to the strict rules around observing Shabbat, such as not using electricity), I do keep kosher, go to Shabbat services at least once a month, and make sure to light candles and say kiddush on Fridays. Andy was raised Catholic but dislikes organized religion and considers himself somewhere in between agnostic and atheist.

Thankfully, one of the most significant strengths of our relationship is our ability to communicate effectively. Our conversations regarding religion, while sometimes difficult, have been meaningful and have helped us to better understand each other.

When our relationship became serious and more questions regarding religion arose, I realized that I wasn’t able to answer many of them. While I was following some traditions and was involved in Jewish learning, there were still many things I was ignorant about. In the past, I had assumed that my partner would be Jewish and would be in charge of most of the religious traditions. When I realized that I would be the partner that would take that role in our home, I began to learn as much as I could. With the full support of Andy, I took a six month sabbatical from work to study Torah and Talmud at the Pardes Institute of Jewish Studies in Jerusalem. It was an amazing experience that helped me to take more control over my religious beliefs and practices.

As we spoke of marriage and children, Andy devoted time to learning more about Judaism too. It was already a part of our lives in terms of food and Friday nights, which resulted in him being extremely knowledgeable about kashrut and the Shabbat songs and prayers. He furthered his education by reading books about Judaism and Jewish history, especially This is My God by Herman Wouk. Additionally, we took an introduction to Judaism class and attended an interfaith workshop at the DC JCC.

When we first started planning our wedding a year ago, I had a feeling that one of the hardest things would be to find a rabbi who would marry us, be supportive and be willing to perform a traditional Jewish ceremony that was inclusive of friends and family. However, there turned out to be many resources for finding a rabbi to perform an interfaith wedding, including Unorthodox Celebrations and InterfaithFamily’s referral service for finding officiants.

Unfortunately, after speaking with several rabbis, I did not feel a true connection with any of them. Feeling ready to give up, I decided to do my own research. We are getting married near a small Virginia town which happens to have a Reform synagogue. On a whim, I called the synagogue and asked them if their rabbi performs interfaith ceremonies. The very helpful gentleman on the phone told me that the current rabbi does not and it crushed me. Fortunately, he then told me that their previous rabbi who had just retired did and gave me his contact information. It turned out to be perfect. The rabbi’s wife’s family was also from Ukraine and we had a lot in common. We met with him recently to plan the ceremony. 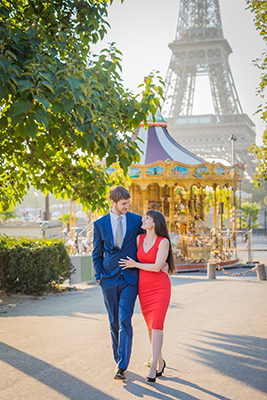 Andy and I decided together that our ceremony would be Jewish, but would still be inclusive of our friends and family who are not Jewish. Our go-to wedding book was A New Jewish Wedding by Anita Diamant (she has a new version that just came out, The Jewish Wedding Now). It helped us tremendously with finding traditions that resonated with the both of us. After reading the book, we worked closely with our rabbi to discuss the parts of a Jewish wedding that we wanted to include. One of those elements includes a ketubah, which we are getting through Ketubah.com.

We are including both of our sisters as witnesses and used InterfaithFamily’s “Choosing an Interfaith Ketubah” resource to create our custom ketubah text. We will also be having a chuppah with two friends and two family members as chuppah holders, a tnaim ceremony for our mothers and yichud, which is a short interlude after the wedding ceremony where Andy and I can have a moment to ourselves during what will be a happy, albeit chaotic, day.

Because we had so many resources to aid us in planning our wedding, because we had the support of a rabbi and because of our ability to communicate our thoughts and feelings about religion, planning our wedding has not only been incredibly meaningful, but it has strengthened our love and commitment to each other. We are three months out from our wedding day and we can’t wait to say “Cheers,” “L’chaim” and “Nazdarovye” with all of our friends and family.