A Girl, a Guy and a Waffle House 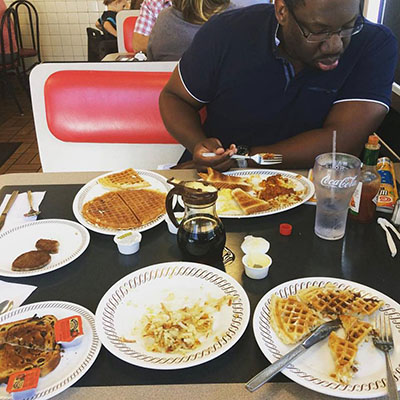 In case you didn’t notice from the pictures, Femi and I are a devilishly handsome, interfaith, interracial couple. We also happen to live in the South. While Atlanta is a shiny blue dot amongst a sea of red, it’s still the South. There are challenges we have down here unique to any other part of the country. Case in point are the reactions we get to being an interracial couple. In the interest of fairness, let me say that not all of them are bad. For instance, people at restaurants remember us because we stand out (which the narcissist in me LOVES). And, when I see other interracial couples out, we give each other a nice smile of solidarity. Plus, it’s scientifically proven that we will make beautiful children.

But then there are the not-so-great reactions. Older, white men, stare incredulously at Femi like he’s committed a crime. While black women stare daggers at me because I’ve “stolen one of the good ones.” That’s tough for me to wrap my head around because my falling in love with Femi wasn’t part of some master plan to undermine the black women of the world. However, I do understand their anger, even though in this case it’s misplaced.

The worst example of this took place in one of the most sacred institutions in the South: Waffle House. Northerners, imagine an IHOP, but better, and you get Waffle House, where the elite meet to eat. Waffle House is supposed to be a judgment-free zone. It’s like the Statue of Liberty of food joints; give me your tired, your poor, your hungover masses yearning to eat hash browns (scattered, smothered, and covered, in my case). Imagine our surprise when one morning, when Femi and I were sitting on stools at the counter, we shared a quick kiss and a black, female server stopped in her tracks, gave us the ugliest look I’ve ever seen, and kept walking. We were shocked; the questions started flying. Did that just really happen? Maybe we imagined it? Femi, can I finish your cinnamon raisin toast? While this wasn’t the first look we had ever gotten, this was by far the most brazen. Femi is lucky because he can let that kind of thing roll off his back, whereas I know I’ll carry that moment with me the rest of my life.

One place where we have rarely been judged for being interracial has been the religious community. I have brought Femi to several Jewish events over the course of our relationship; we’ve done Shabbat dinners with friends, attended Atlanta Jewish Music Festival events and he’s done Passover seder at my house twice. Conversely, Femi and I have been to his mother’s church, the Community Church of God, three times. Besides the religious differences between the two communities I should also note that most people at my Jewish events are white, while the Church of God has a mostly black congregation. Yet we’ve felt completely welcome in both situations. I will say I’d love to see more Jews of color at the community events I attend so Femi doesn’t feel so tokenized, and I think conversations are beginning to happen to change that. Meanwhile, the Church of God is such a welcoming and friendly place. Everyone I met seemed genuinely happy to meet me, and didn’t ask me any questions about my faith (which is something I worried about). We sang and clapped along to the beautiful church choir, and even though there were portions of the service that didn’t overlap with my specific religious beliefs, their general mantra is to be a good person and love thy neighbor—who can’t get on board with that?! Really the most awkward moments were of my own doing when I’d feel particularly moved by a song or a passage and I’d say stuff like “hell yeah!” or “damn right!” and Femi would have to nudge me and politely remind me that we were in church. Seriously, sometimes I shouldn’t even be let out of the house.

There are plenty of naïve people out there who think we’re in a post-racial society. Not to burst bubbles, but we’re not. That’s going to take many years of open dialogue, and many years of separation from past generations of backward thinkers. But it’s nice to know that Femi and I have access to a few communities who appreciate the depth of our relationship, and don’t just stop at the colors of our skin.