The Challenges of Keeping Kosher at an Interfaith Birthday 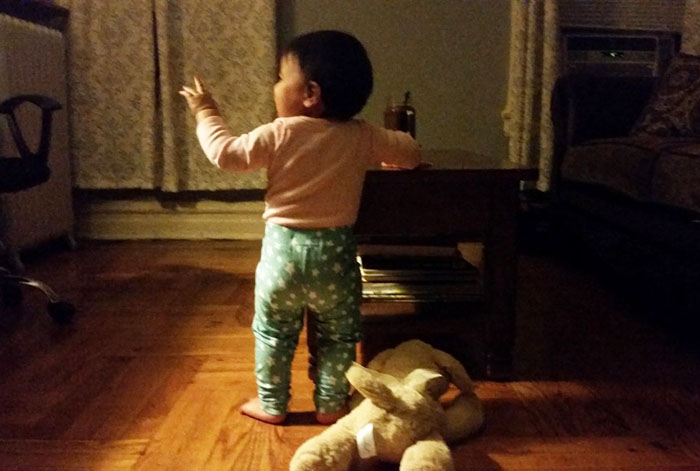 Growing up, my mother’s house was kosher. We had dishes for dairy and dishes for meat and we never mixed milk with meat. This goes back to the teachings of the Torah where it states on three separate occasions that a baby goat is not to be cooked in it’s mother’s milk. But our house was kosher mainly because my mother wanted my brother and me to fit in at the Orthodox Yeshiva we went to even though we weren’t Orthodox.

This plan fell through more than once. Most of my friends’ parents knew that my own parents weren’t religious. When we had sleepovers it was I who would have to travel to my peers’ houses because our house wasn’t “kosher enough.” But my mother’s efforts weren’t in vain. When Adrian and I moved into our apartment a few years ago it was my Grandmother’s dishes I unpacked from a cardboard box labeled “Grandma Rosie’s Dairy Dishes.”

There were teacups with pink roses and a tan trim on them wrapped in bubble wrap. There was a cake plate lined in gold and a blue glass candy dish I remembered reaching into as a child to pull out sticky black licorice squares. These dishes had made their debut in my Grandmother’s apartment then later at my mother’s house and finally were gifted to me. They held memories of Friday morning pancakes and grilled cheese sandwiches. They also held the responsibility of staying kosher.

For my nephew’s first birthday party this past Sunday, the Star Wars cake I made followed the kosher rules. But the kosher rules also brought up concerns for our daughter Helen’s quickly approaching birthday in October. My brother and his wife ordered from a kosher catering company and had traditional Brooklyn/Jewish food. There were pastrami sandwiches, pickles, coleslaw and chocolate cupcakes with vanilla frosting in addition to the cake I baked. As with any Jewish event there was more than enough food. Adrian and I talked about having a Mexican/Jewish themed birthday for Helen to honor the Jewish side of my family and the Mexican Catholic side of Adrian’s family.

I started to get excited thinking about Helen’s birthday. We began saving empty cans of jalapeño peppers for floral arrangements and I bought a pack of Mexican Lotería cards (a traditional Mexican board game similar to bingo) to make into crafty invitations. I obsessed over Pinterest cake ideas and thought that getting balloons that say “uno” instead of “1” would be a cute idea.

Then, in the middle of my excitement, I remembered how much Adrian loves to eat meat and how steak tacos are usually accompanied by fresh cream and cheese. I thought of Adrian’s favorite Mexican dishes that involve chicken and cheese and pork. Then I panicked.

We keep a kosher home but when we eat out we don’t eat kosher. But how was I to explain to him that Helen’s birthday had to follow kosher rules? My family is kosher but his family will also be there. Part of me felt I was being unfair. Part of being kosher sometimes makes it seem like I am making Judaism seem more important than Catholicism, and that’s not fair. But, how do you bend a rule that can’t be broken because of tradition or belief or just out of respect for other family members?

I waited until Adrian got home from work.

“Bebe,” I said, “I’m worried about Helen’s birthday. Maybe we shouldn’t even have a party this year.” I couldn’t believe I was considering cancelling my daughter’s first birthday party so that I wouldn’t have to have an argument about steak enchiladas.

“Why?” Adrian asked, “I thought you wanted to do a big thing the way your brother did.”

“Well, I did, but I’m worried about the food.” I started to bite my nails.

“Stop biting your nails. What about the food?” he said.

Adrian thought for a while before he answered, “What does that entail?”

He knew some of the kosher rules but I reminded him that aside from the meat being kosher we couldn’t mix milk with meat.

“You want meat at the party?” he asked.

“I thought you wanted meat at the party,” I said.

“What?” I couldn’t believe it. Adrian is a carnivore through and through and I assumed he would want to have something with steak at Helen’s party.

“I mean we can just do cheese enchiladas, guacamole, salsa, chips and have everything be dairy, no meat.”

“I thought you wanted meat!” I yelled in shock.

“I do, but dairy is so much easier!” he shouted back.

Part of the challenge of being in an interfaith relationship is trying never to offend the other person. I was so afraid I would offend Adrian by not having traditional Mexican cuisine at our daughter’s birthday that I looked past the other options in Mexican cooking. Mexico has a wide variety of seasoning and spices and I was looking only at having a kosher party as being a problem and not a bridge between two cultures and traditions. Anyway, Helen’s first birthday is about celebrating the birth of new traditions as well as old. We want to bestow on her a life rich with flavor; a life where the menu has both chicken noodle soup and pozole.