One of the most common and traditional Jewish dishes served on holidays is kugel. Kugel is a fantastic dish for any holiday, and one you can make in a variety of styles. It is a comfort food that can be made in Passover-friendly ways, either savory (see this potato variation) or as a sweet dessert, like in the recipe below.

At its heart, kugel is a baked casserole that includes starch (such as potatoes or noodles), as well as eggs. On Passover, kugel is often made with potatoes and served with meat dishes, but it can be made with dairy items instead, like milk and cream cheese. This brings us to Matzah Kugel, a sweet, dairy-filled confection of matzah layered with sweetened cheese.

Sure, you could make a kugel with Passover noodles and come up with an almost-but-not-quite-satisfying proxy for the regular version, but you will never forget that it’s not the “real” thing. Matzah kugel, on the other hand, takes the idea of a noodle kugel as a jumping off point and transforms it into something different but equally delicious.

This dish can function as a side dish or a main course. (It pairs well with a side salad and a piece of gefilte fish.) Kugel is also an excellent dish during Shavuot, when it’s customary to eat dairy foods, but you’ll probably be using regular egg noodles by the time Shavuot rolls around.

You can freeze leftover portions: They reheat well in the microwave and even make a delicious and quick breakfast when you just can’t take one more piece of matzah with cream cheese.

Some people have strong feelings about the kind of recipe that aims to create a Passover-friendly version of a dish that is typically leavened. Detractors think creating Passover bagels, muffins, and rolls miss the point of the holiday’s specific diet. Those in favor see the practice as helping to make a difficult holiday more bearable.

Personally, I fall somewhere in the middle. I don’t see the point suffering through a week of “I can’t believe you want to call this a bagel.” (But hey, if you can convince yourself that whatever you’ve come up with tastes like a bagel, more power to you. I’ll have eggs for breakfast this week.) On the other hand, when the introduction of matzah into a dish creates a delightful new twist on an old favorite, I’m all for it. 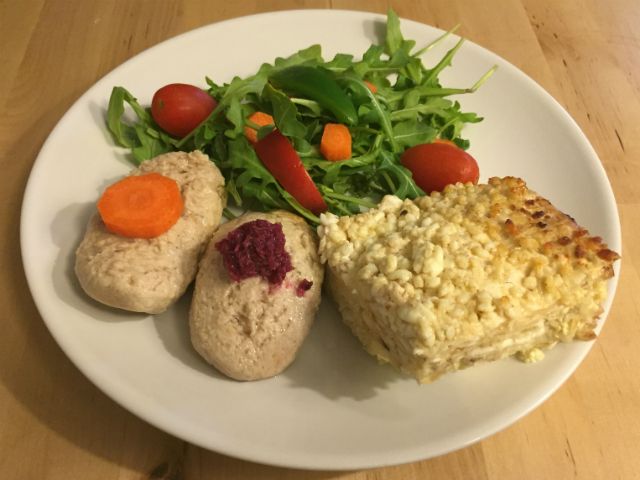 4.  Arrange half of the matzah so that it covers the bottom of the dish.

5.  Pour half of the cheese mixture over it. Repeat with balance of the matzah and cheese mixture. If you wish, sprinkle additional cinnamon and sugar over the top of the kugel.

David Levy lives in Brooklyn, NY, with his fiancé Keith and their cat, Rhoda Morgenstern. By day he is the Member Education Manager at Actors’ Equity Association, the union for actors and stage managers working in the American theatre. After hours, he writes for JewSchool.com, TalkinBroadway.com, CastAlbums.org among other places, and you can hear him talk about New York theater and performance art as part of the rotating panel of co-hosts of the Maxamoo podcast. Find him on Twitter (and pretty much anywhere else) as @itsdlevy.