In New England, beets give red flannel hash its sweetness and beautiful pink color. The sweet beets contrast with the salty meat (usually leftover corned beef). This recipe uses apples and honey for sweetness. Instead of the traditional Irish corned beef, the meat in this recipe is a Jewish deli staple: Pastrami. Apples and honey at Rosh Hashanah are usually enjoyed at the end of a meal in a sweet treat like honey cake, or served simply for dipping apples into honey. This twist lets you start your day with some apples and honey for a hearty breakfast. 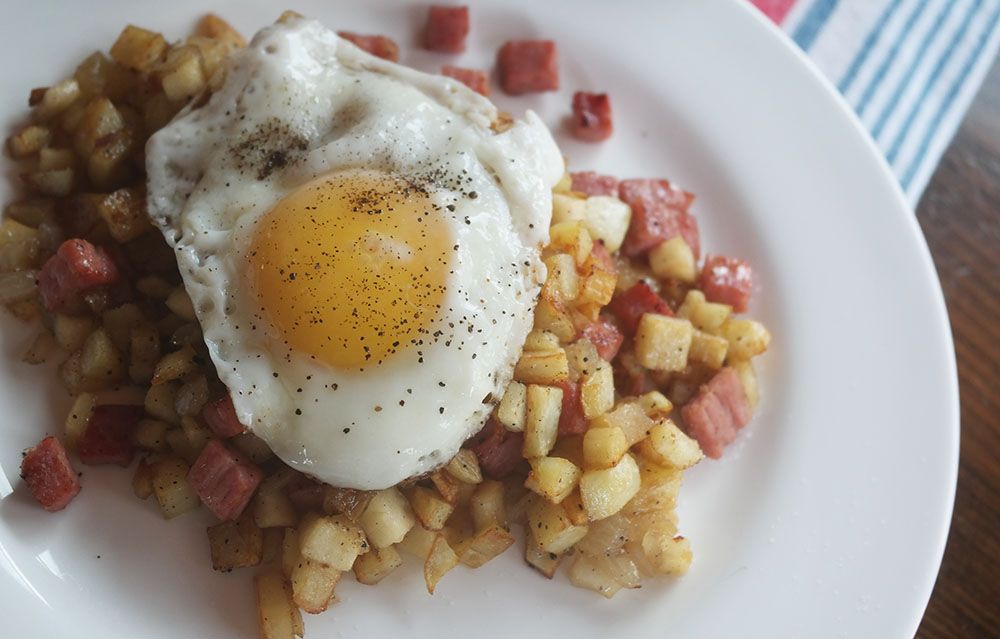 2. Peel and slice your apples the same way. Put the apples into the acidulated water (the lemon water). In a pan, heat 1 Tbsp. of the canola oil. While the oil heats up, drain the potatoes and dry them on a kitchen towel. Toss the potatoes into the pan and stir to coat with oil. Add a pinch of salt and pepper to the pan. Cook over medium-high heat until browned.

3. While the potatoes brown, dice 1/2 of the onion. Once the potatoes are browned, set them aside in a bowl. Add a little more oil to the pan (2-3 tsp.) and toss in the diced onions. Cook over medium-low heat.

4. Drain the apples. Once the onions start to become transluscent, add the apples. Cook for a few minutes together, then add 1 generous tablespoon of honey. Stir and cook together until the apples are soft but keep their shape. Season with a pinch of salt and pepper. Set the apple, honey and onion mixture aside in a bowl and wash the pan or wipe it down so you don’t burn the honey that is left behind.

5. Dice the pastrami to a small dice, the same size as the potatoes and apples. Add 2-3 tsp. of oil to your pan. Brown the diced pastrami. Once the pastrami has browned on all sides (or close enough), toss in the potatoes and the apple mixture. Season the entire hash with some salt and pepper. You can also add a pinch of cinnamon and a pinch of cayenne if you want another level of spice.

6. If you have been using a cast iron pan, you can put the entire pan in the oven to keep it warm while you fry up the eggs. I think sunny side up eggs are the best way to top the hash, but it can be topped with an egg any way your family likes them. Put the hash on four plates, then top with an egg, sprinkle a little salt and pepper over the egg, and serve.

Have a sweet new year! 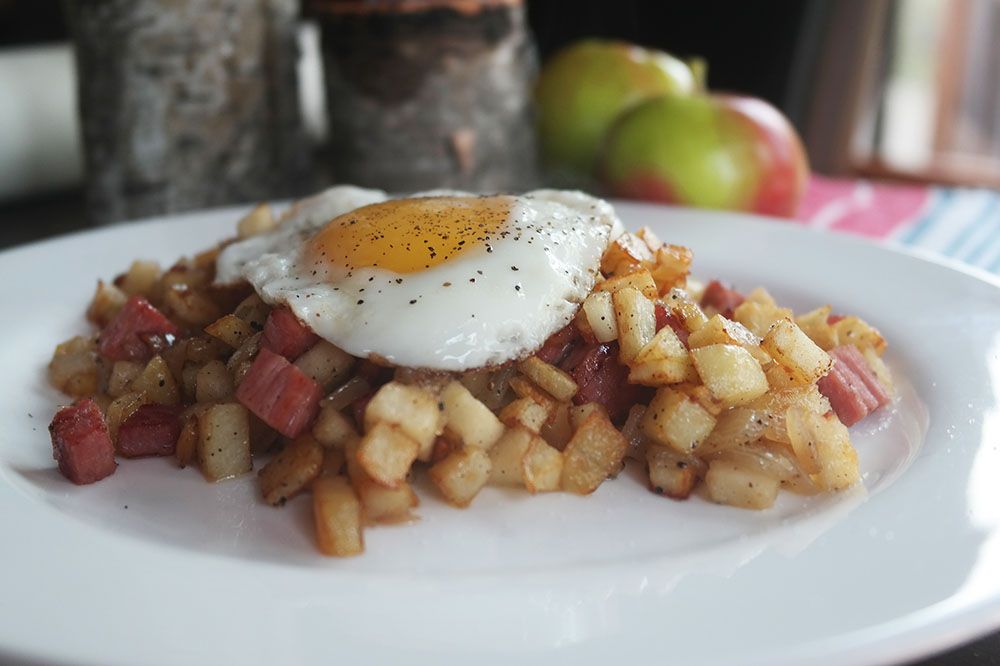