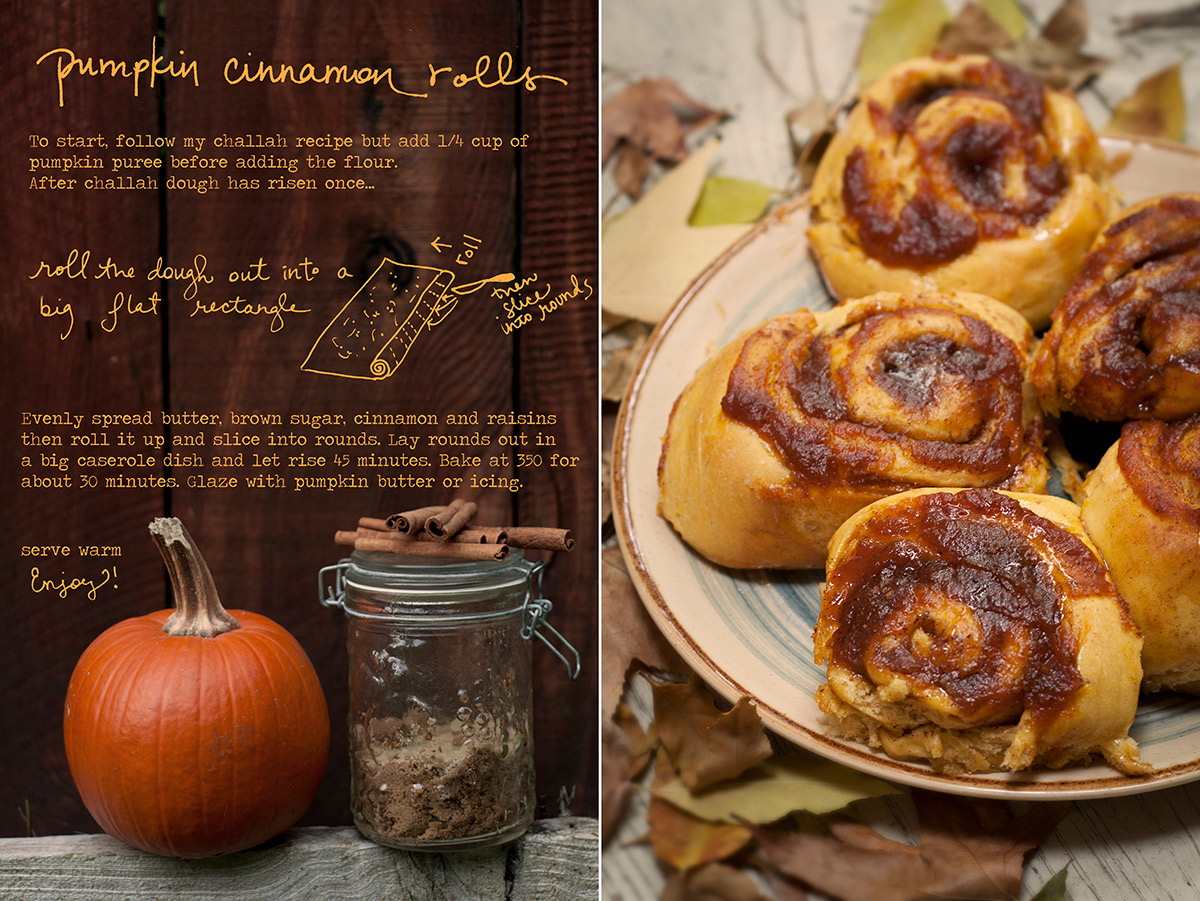 Challah dough makes for great cinnamon rolls–the dough is sweet and a little chewy, yum! These little rolls are full of fall flavor and are a delicious Shabbat treat. They also make a really nice addition to a Yom Kippur break fast, just as we’re starting to get in the fall spirit. I like to put a modern spin on Jewish recipes, and if you’re attending a celebration where not everyone is Jewish, it’s nice to bring foods that have a traditional Jewish element but also some flavors everyone is familiar with.

Use my recipe for challah dough as is (or add a little pumpkin puree when you’re mixing it together). I found a jar of pumpkin butter at Trader Joe’s which was a great glaze, but you can also just make a basic icing (1 C powdered sugar + 2 Tbsp. butter + 2 tsp. milk+ 1/4 tsp. cinnamon). Glaze right as they come out of the oven and enjoy immediately!

1. Follow my challah recipe, but add 1/4 cup pumpkin puree before adding the flour.

2. After challah dough has risen once, roll it into a big, flat rectangle.

3. Evenly spread butter, brown sugar, cinnamon and raisins on the challah, then roll it up so the filling creates nice swirls between layers of dough, and slice it into rounds.

4. Lay your rounds onto a big, greased casserole dish and let rise for 45 minutes.

6. While still warm, but not piping hot, glaze with pumpkin butter or icing. Serve!

This recipe was reprinted with permission from The Forest Feast

After several years of working as a food photographer in New York City, Erin Gleeson moved to a cabin in the woods in California where she created The Forest Feast food blog and cookbook series which fuse her love of cooking with her own photography and watercolor paintings. Inspired by local ingredients she creates simple, mostly-vegetarian recipes that are full of fruits and vegetables. Her recipes are presented as visual diagrams that are simple to follow and are easy enough for a weeknight, yet impressive enough for a party. Erin also has a line of Forest Feast stationery and gift items which feature her artwork. She has just returned from 3 months in Europe where she did research for her 4th cookbook which will be focused on Mediterranean small plates (Abrams, Fall 2019). Follow along @theforestfeast.