I grew up in an Orthodox Jewish neighborhood in Brooklyn, NY. My parents were liberals who met in the theatre where they had been professional actors. My father was a Brooklyn boy, born and raised in Crown Heights. My mother, a Baltimore native who said she always wanted to marry a Brooklyn boy, and so she did. They moved to Midwood, a Jewish neighborhood in Brooklyn. They wanted to be close to my Grandmother and to buy a house and to teach their children my brother and I the importance of our Jewish heritage. My father wanted us to always remember where we came from.

My parents were not religious but we celebrated every High Holy day. Every year it is a tradition to walk with my mother one mile to the Orthodox synagogue that is around the corner from where my Grandmother used to live. The walk to synagogue has always been part of my tradition with my mother. Our synagogue separates men on one side and women on the other. I never saw myself as less than anyone else, although I know there is much debate about a woman’s role in Judaism. I always knew I was a Jew. I knew inside my heart what that meant and I spent a lot of my childhood defending my differences to those from more devout households.

We were not a religious household by any means. My father drove on Saturdays; my mother got her hair done on Friday nights. We were traditional Jews who knew all the stories from the Torah, but I wore jeans and my brother played electric guitar and learned every AC/DC song by heart to play on his Gibson SG (the same guitar Angus Young had). My friends would often invite me over on Shabbat so that I could turn on their electronic appliances for them, something they were not permitted to do on the Sabbath.

Fast-forward to today, and my life partner, Adrian, is Catholic. He was born in a small village in Mexico and left his home to work at 13. He came to the United States at 15, and when he left his village, his mother tied a scapular around his neck that had been blessed by the local priest for guidance, safety and luck. He has never taken it off.

When times are difficult Adrian directs his prayers to the spiritual mother of Mexico, the Virgin of Guadalupe. She is well known for having appeared to a poor village man named Juan Diego. No one would believe Juan Diego when he said the Virgin appeared to him but Guadalupe urged him to go back and convince the village people. When he returned to the village, and a crowd formed around him, he opened his cloak and 100 red roses fell out. There, on the inside of the cloak was an apparition of Guadalupe. The great Basilica in Mexico City was built where the Virgin is said to have revealed herself.

As a Jew and a deep believer in Kabbalah and all things mystical, the stories of the Torah and the stories from the Bible are the lessons I would like to pass down to the next generation. It is the message of each of these stories that make the traditions of both religions so rich. On the 12th of December Catholics from Mexico celebrate the Virgin of Guadalupe’s birthday. Here in Brooklyn we light Hanukkah candles. Both traditions celebrate life.

Adrian and I recently had our first child, a baby girl. She already hears the coos of Spanish, English and Hebrew echoed throughout our household. At two months old she has already witnessed her mother burn Christmas cookies, light the menorah in the wrong direction and forget to buy half the ingredients to make tamales on a trip back from the grocery store. But, in all the chaos she is witnessing traditions new and old. Our baby is named after my two Grandmothers and we recently had a baby naming ceremony for her at the East Midwood Jewish Center. It was an incredible day because my family was meeting my partner’s family for the first time. We were all there together from different cultures and religions celebrating this new and precious life.

I have always wanted children and I was always worried about it never being the “right time.” It was never the perfect situation, there was never enough money or the right job or the Jewish boy I was “supposed” to marry. Finally one day after having been with Adrian for three years I stopped waiting for the “right moment” to have a child. We just decided to have one. We talked about our different cultures and religions. We talked about what our child would grow up learning about and believing in. One night we said, “she will learn from both of us and the biggest lesson she will learn is love and respect.” Those are the two basic themes of any religion.

Delivering a baby was the most spiritual journey of my life so far. Both Adrian and my mother were in the delivery room and when the baby came out we all burst into tears. Adrian ran around the table to hug my mother, the baby was on my chest for skin-to-skin and in that moment I thought of a quote I had heard as a girl in Yeshiva. It was a quote from the Talmud: “Every blade of grass has its angel that bends over it and whispers ‘grow, grow.” That’s what we were put on earth to do. I’d like my daughter to grow to ask questions and not always do something because it’s the way it’s been done for centuries.

I’d like her to respect and love and admire where both her parents come from so that she can respect, love and admire herself. So that she can know that there is never just one faith – but to have faith in something, in anything will catapult her toward her dreams and whomever she wants to be. 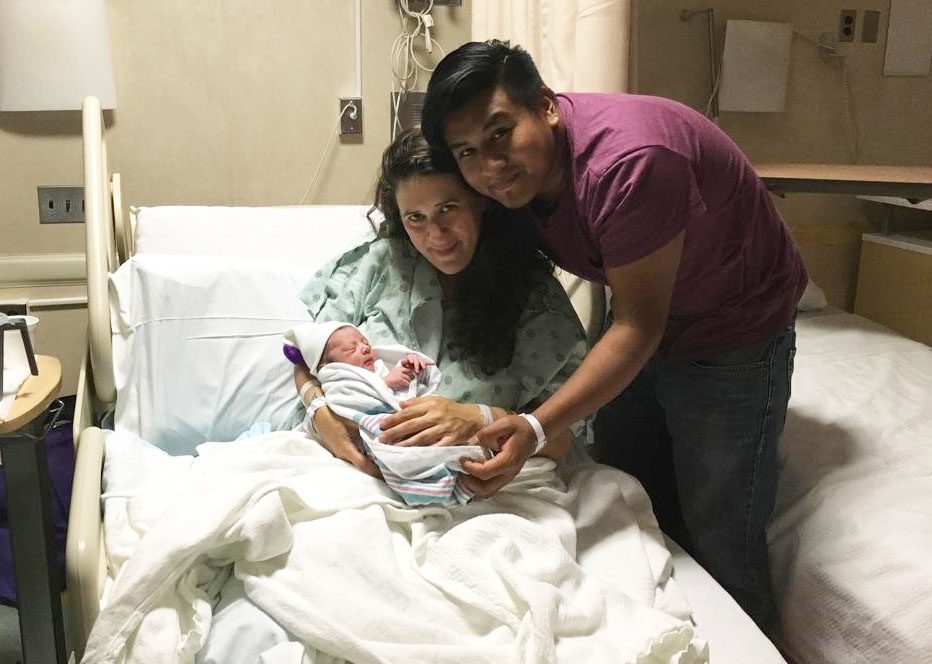