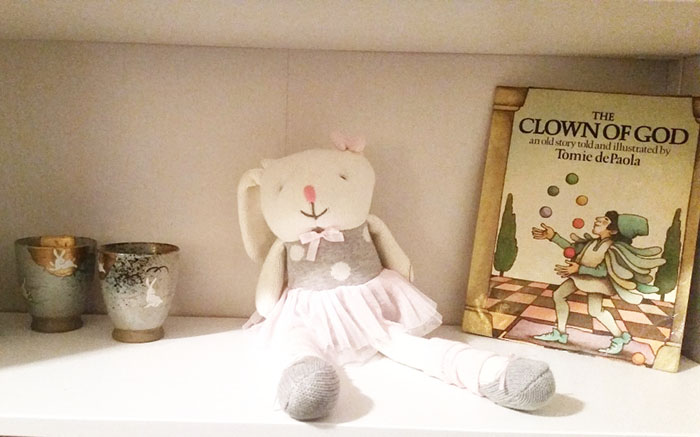 When I was a child there were two books I wanted desperately to hear before bedtime. The first was Goodnight Fred. This was a favorite because the grandmother in the book comes out of the telephone to visit Fred and Arthur, her grandsons. I, too, thought my grandmother lived in the telephone and could come out and visit whenever she pleased.

Then there was The Clown of God. This book, written by Tomie De Paola, is about an Italian boy named Giovanni who juggles. He juggles for food and a place to sleep. He spends his whole life juggling and has one fancy trick called “the sun in the heavens,” in which he juggles colorful balls. The last ball he throws into the air is gold like the sun. Then one day he drops the sun in the heavens and he stops juggling. He goes from door to door begging for bread as he once had done as a child. Now that he’s an old man, people don’t care about him. The book is filled with Catholic references. By the end of Giovanni’s journey he ends up at a church for a big religious festival. He has fallen asleep in the church and when he wakes there is a big procession for the statue of the Madonna and her child.

When everyone leaves, Giovanni notices that the Madonna’s son is frowning. So, Giovanni puts on his clown makeup and does his most famous juggling trick in front of the statue. As he throws up the golden ball he shouts, “For you sweet child for you!” Then he drops dead in front of the statue. Two monks run in and find him lying dead on the floor. One of the monks looks at the statue in shock. The statue of the boy in the mother’s lap is smiling and holding the golden ball.

It isn’t surprising that I chose to build my life with a man from Mexico who grew up poor, Catholic and happy. I pretty much looked all my life for Giovanni and found him in Adrian. Instead of juggling, Adrian cooks. He also knows how to enjoy the simple things in life. We have a roof over our heads and we have food in our bellies. We have work. We have a healthy baby girl. These are not small things. 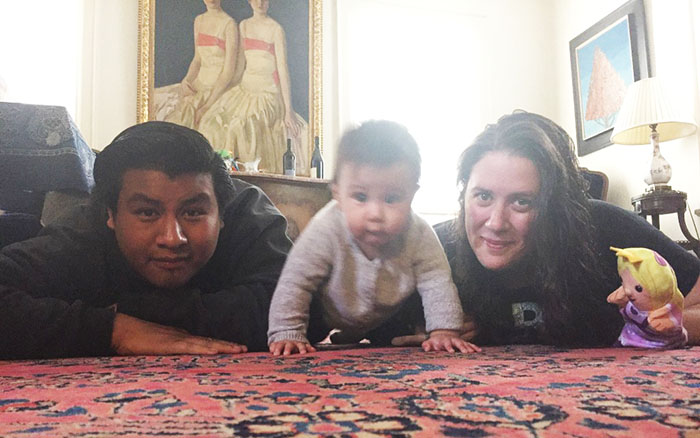 As a child I did not grow up poor. I didn’t grow up Catholic either. I grew up Jewish and most of the time I was happy. I expected more because I was given more as a child. I grew up with big dreams and high hopes and plans. I planned everything. I planned what shoes I was going to wear with what shirt. I planned what job I would have, how much money I would make and whom I was going to marry. I planned to have a baby no later than 25 years of age. I planned to own a house and a summer house by 30. I planned to keep in touch with all of my closest friends from nursery school, first grade, camp, junior high, high school and work. Sometimes, God has other plans. Actually, all of the time God has other plans.

I am 35 years old. Adrian and I live in a one-bedroom apartment in Midwood, Brooklyn. Helen Rose, our little one, wakes up every morning smiling at us from her crib. In our apartment there is a hamsah hanging in our kitchen and a Virgin of Guadalupe in our bedroom. There is a menorah in the living room and a prayer to Jesus in Adrian’s wallet. Good Night Fred and The Clown of God are a part of Helen’s library. These are our riches.

Life surprises me. Growing up Jewish I wish I could say that my most inspirational book was A Tale of Two Seders or Snow in Jerusalem. This is not the case. The book that most inspired me while I was tucked in under my puffy quilt with my Scottie dog wallpaper was The Clown of God. On my journey through Judaism this makes sense. When I began working in restaurants I was most inspired by the kitchen workers, most of whom had left their own countries in search of a better life. In school, I am most inspired by the students who hold down two jobs and have families or the students whose first language isn’t English but are getting an education and getting A’s in every class. I am inspired by the human capacity to overcome struggle.

I feel that people often tend to see goodness as a religious quality. But goodness is a human quality. Goodness is often compared to gold. It is this quality I wish to pass on to my daughter. Having an interfaith family is challenging. It challenges me every day to be more open and aware. It makes me ask questions and urges me to listen. It stops me from making plans and lets life lead me.

My favorite page in Tomie De Paola’s Clown of God is when Giovanni is still a young man and he makes his money juggling. One day he runs into two monks on the way to town. He shares his food with them and they begin to chat:

“Our founder, Brother Francis, says that everything sings of the glory of God. Why, even your juggling,” said one of the brothers.

“That’s well and good for men like you, but I only juggle to make people laugh and applaud,” Giovanni said.

“It’s the same thing,” the brothers said. “If you give happiness to people, you give glory to God as well.”

I wonder if my mother knew while she read me that book that it would take two faiths, not one, to convince me of God and God’s many beautiful and unexpected plans.