My last blog post was a plea to program providers to look at their enrollment forms with new lenses this summer. This blog post is for Jewish educators with the hope that they keep it real and honest with their curriculum. 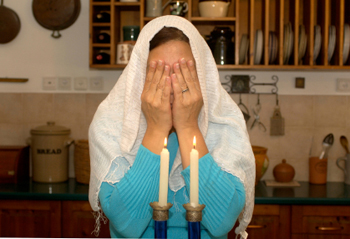 Some synagogues have a ritual policy that women who are not Jewish cannot light Shabbat candles on Friday nights at the congregation. This blog post is not about the ramifications of this ritual boundary. Ritual committees, clergy and synagogue board of directors sometimes spend time studying the meaning of the ritual, the words to be said, the act itself. They look to denominational guidelines, see if their policies make sense given their population, and probe their hearts and souls about when to include those policies in ritual participation of the community of people who aren’t Jewish.

Often, if the synagogue finds that the ritual cannot be performed by someone not Jewish using the traditional Hebrew, for instance, another reading or another way of performing the ritual can be created. This can sometimes work very well. In addition, some can understand and appreciate that it would not make sense for them to say certain words if they haven’t officially joined the Jewish people, entered into the covenant and taken on the religion. Other times, those who are not Jewish feel totally comfortable saying Hebrew and performing rituals because the deeds are personally meaningful to that person and their family.

This is a conversation about making sure that there is not a disconnect between what children in the religious school learn and are expected to come home and do and what is done in communal worship at the synagogue.

If there are children in the synagogue who have moms who aren’t Jewish and the children learn about Shabbat with pictures in books and suggestions made that it is the mom who lights the candles, then the school should assume and expect that moms who aren’t Jewish would be the ones to fulfill this mitzvah, this important and beautiful aspect of bringing in Shabbat.

If the synagogue has a rule that only Jews can light Shabbat candles, then should the instructions to the children reflect that? Children can be taught that either parent, depending on who is Jewish, can light the candles. The synagogue could teach that men can light Shabbat candles by calling up Jewish dads to perform this act. Perhaps the whole family could come up and the father could light the candles but all of the faces of the family members would reflect the glow from the Sabbath light. Maybe families would be encouraged to share Shabbat together.

Children and families should be expected to practice what children learn in religious school in home and at shul. You could say some families don’t keep kosher at home but understand that their synagogue does have kosher standards. Synagogues keep a higher level of observance than people do in the home. However, it could be a negative experience for a child to learn that only women light the candles while their own mother is not allowed to light the candles in the synagogue.

What are your feelings about this?