This article has been published as part of a partnership between InterfaithFamily.com and JBooks. Visit JBooks for more articles on interfaith literature.

Review of The New American Judaism: The Way Forward on Challenging Issues from Intermarriage to Jewish Identity, by Rabbi Arthur Blecher (Palgrave Macmillan, 2007). 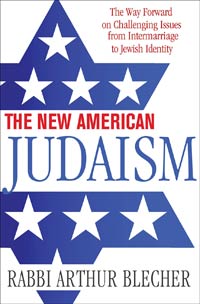 Blecher comes to his project without the same lofty credentials that Sarna brought to his: Sarna is a professor of Judaic studies at Brandeis University, and American Judaism was the culmination of his work as the official chief historian of the 350th anniversary of Jews’ arrival in the colonies. Blecher, on the other hand, prides himself on his anti-institutional pedigree. He was ordained as a Conservative rabbi but has worked outside the major denominations for nearly 30 years, and is now a psychotherapist and independent rabbi.

To Blecher, the Judaism of 20th century America is quite distinct from previous expressions of the religion. It is dominated by denominations that resemble Protestant institutions more than classic Jewish ones. Rabbis have unprecedented authority over religious life. And Judaism’s worldview–colored as it is by the trauma of the Holocaust, the joy (and anxiety) over the creation of Israel and deep worries over the price of successful assimilation–is profoundly different than the perspectives of previous centers of Jewish life.

The irony is that no one’s willing to admit it. Poring through books, journals and sermons, Blecher finds endless references to continuity, authenticity and survival. Even the website of an innovative movement like Reconstructionism stresses that Judaism is “an evolving religious civilization.” But where the movements claim evolution, Blecher sees revolution.

But what’s the harm in that? Don’t all institutions manipulate history to bolster their legitimacy? The harm, as Blecher sees it, is that the fixation on survival and authenticity creates a distorted perception of what it means to be Jewish. Worse, it calcifies Judaism in institutions and ideologies that he finds outmoded and exclusive.

Blecher deftly dissects the myths of Jewish continuity. Consider the patriarchs Abraham, Joshua and Isaac. Their religion is barely recognizable to modern eyes. There were no holidays, no temples, no rabbis, no Torah; worship was organized around animal sacrifices. Men burned goats to show their piety, while women, according to Genesis, would cry and wail to get God’s attention.

Or take the more centralized form of Judaism that followed. The Hebrews flocked to The Temple in Jerusalem–the only official place of worship–where a hereditary priest class would sacrifice animals while another hereditary class of religious leaders, the Levites, would sing. Only with the Babylonian exile in 586 B.C.E. did the institutions, rituals and liturgy we come to associate with Judaism begin to take shape. Rabbis emerged, local houses of worship were founded, scholars codified such rituals as candle-lighting on Shabbat, the Passover seder and the Jewish wedding ceremony (as well as other familiar customs too numerous to count). But still much of what we associate with traditional, “authentic” Judaism did not yet exist–the laws of kashrut were not written until the 1500s.

The myths continue into the modern era. The most intellectually powerful section of the book deconstructs the myth of 19th century shtetl life, which Rabbi Abraham Joshua Heschel glorified as “the golden period in Jewish history.” Blecher documents how the notion of the shtetl as a haven of communal cohesiveness, family togetherness and extreme piety was a creation of Yiddish fiction writers in the early 20th century. With the massive success of “Fiddler on the Roof,” fiction curdled into fact. But as Blecher points out, some of the communities that Heschel catalogued were neither small nor all-Jewish. Nor was the Pale of Settlement the social paradise many like to imagine: parents arranged marriages between children as young as 13, anyone who did not fit strict social norms was an outcast and women enjoyed few rights. As Brandeis scholar ChaeRan Freeze showed in her 2001 book Jewish Marriage and Divorce in Imperial Russia, Jewish divorce rates in 19th century Russia were far higher than general rates of divorce. And if the shtetls were such idyllic places, why did millions leave them for America in the early 1900s?

Unfortunately, Blecher is on less sure footing in his dismantling of the “myth” that intermarriage has led to population decline. He argues that intermarriage is a boon to Judaism and responsible for Jewish growth. It’s not that such a phenomenon is not possible–it’s already happened in Boston–but it hasn’t occurred on a national level yet, by any measure. He even critiques inmarriage on the grounds that inbreeding raises the risk of genetic diseases. He’s not wrong, but the American Jewish population is already so genetically diverse from intermarriage, conversion, adoption and immigration that we are generations away from suffering from the health problems that afflict isolated ethnically homogeneous populations.

But he brings much common sense to the debate on intermarriage. While many see the rise in mixed marriages in the ’70s and ’80s as solely the byproduct of assimilation, he points to broader cultural factors: the flowering of feminism, a greater acceptance of cultural differences (among Jews and non-Jews) and changing expectations of romantic love. Further, he exposes rabbis’ hypocrisy: “why have [the denominations] singled out intermarriage for public rejection? No denomination has issued a similar edict regarding Jews who work on the Sabbath, who eat pork or who commit felonies; they can get married by a rabbi as long as both partners say they are Jewish.”

The modern obsession over survival, authenticity and continuity may have led to communal cohesiveness, but it has also led to a sense of Jewish identity that is spiritually and morally shallow. For too many modern Jews, the purpose of being Jewish isn’t about theology or lifestyle, it’s about keeping Judaism alive. But why? To what end? As more Jews with mixed cultural heritages come of age and the Holocaust recedes from direct memory, Judaism needs to do better at selling why Judaism matters. The old pitch of “dor v’dor”–“from generation to generation”–won’t cut it in the 21st century marketplace of ideas.

But as skillfully as Blecher deconstructs Judaism’s present, he falters in his proposals for its future. He claims that Judaism is flourishing outside the denominations. His main proof? The Internet, and its galaxy of sites devoted to subjects of Jewish interest. Yes, one could study the Talmud solely via the Internet. But that doesn’t mean many do. As the editor of one minor star in that galaxy, I know from experience that Jewish experiences on the Internet are a supplement, not a replacement, for real-world involvement in a Jewish community. And for better or for worse, most real-world Jewish activities happen in synagogues of the major movements.

Just as the old new American Judaism had its bogeymen (intermarriage, assimilation and anti-Semitism), Blecher has his: the denominations and the rabbis. He clearly longs for a post-denominational world. But Blecher seems conflicted about what role he wants rabbis to take in the new American Judaism. After explaining how individuals can and should lead their own life cycle ceremonies, he says, rabbis “must move forward from our accustomed flexing of clerical muscle in the name of Jewish law lest we marginalize the American rabbinate and decrease its influence.” But isn’t decreasing that influence exactly what he’d like to see?

In his tarring of all the denominations and their rabbis as tainted, he ignores much good that is happening. With Arnold Eisen at its helm, the Conservative movement may be on its way to a sea change in thinking about the place of the intermarried. The Reform movement continues to proactively engage traditionally alienated Jews as well as other religions. Even some in the Orthodox community are becoming a shade more accepting of the intermarried. And with their day schools, summer camps, youth groups and trips to Israel, the movements offer the young opportunities for broader Jewish connections that independent congregations and havurot can’t match.

But while he never outright says it, it’s clear that Blecher doesn’t consider his polemic the final word on the shape of the Jewish future. It is a starting point for conversations–and a provocative one at that. Like all good manifestos, it illuminates, infuriates and incites in equal measure.