When I had my bar mitzvah 18 years ago, it was truly all about the party. Back then, at least at my synagogue and in my community, there was no required community service project, kids didn’t lead the service and the theme of the party was more relevant than the theme of your haftarah portion.

Back then, I certainly didn’t know anyone like Thomas Karatzas.

Karatzas is a 13-year-old boy from San Francisco who not only wanted to have a bar mitzvah, he had to persuade his Jewish mother that he wanted it for religious reasons, not because he needed a new iPod.

In a wonderful story in j., the Jewish news weekly of northern California, Stacy Palevsky writes that “Thomas grew up in an interfaith household.” But that’s not exactly right. His family was more no-faith than interfaith. His father was raised Greek Orthodox, and his mother Sephardic Jewish, but his mother rejected the Orthodox Judaism of her upbringing, and wanted nothing to do with Judaism. As a child, Karatzas was aware of both religions, but practiced neither.

But last January, he came home from school one day and told his parents he wanted a bar mitzvah:

So Thomas wanted a bar mitzvah, and he wouldn’t change his mind. He told his parents he wanted to deepen his understanding of and connection to Judaism, and most importantly, he wanted to bring together both sides of his far-flung family.

But there was a problem:

Since the Karatzases knew next to nothing about San Francisco’s Jewish community, they had no idea where to look for a rabbi or a synagogue that would take on Thomas.

“It’s a beautiful story” how they found both, John [Karatzas, his father] said.

One day in March, John ran into their landlord, a kindly Holocaust survivor by the name of Leon Rajninger.

“Leon, we need help,” John said. “We don’t know where to go to have a bar mitzvah for Thomas.”

Leon introduced the family to his rabbi, Moshe Levin of Ner Tamid, a Conservative synagogue not far from the Karatzas’ home in the Sunset District.

When Thomas started going to services, it was his Greek Orthodox father, not his Jewish mother, who joined him on Shabbt.

“I grew up in a very Jewish neighborhood in New York, and since I grew up with that culture, I felt comfortable in synagogue,” [John] said. “I was just happy that Thomas had found a community to join.”

Thomas eventually had his bar mitzvah on Aug. 30. Jewish relatives from France and Greek Orthodox relatives from New York flew in for the occasion. After the service, Thomas’ family and friends joined him at a celebration at home with food made by his French-Moroccan grandmother. Thomas continues to attend Shabbat services, and is excited about visiting Israel next summer.

It’s not often that a 13-year-old boy can simultaneously embrace religion, reconnect his parents to a religious community and bring his far-flung family together. The notion that the bar mitzvah marks a boy’s transition into adulthood can seem silly, but in Thomas’ case, it’s spot on. 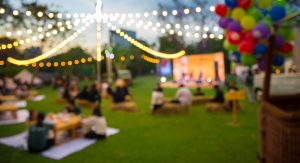 Tu B’Av is an Opportunity to Honor Interfaith Couples