Why We Chose Judaism 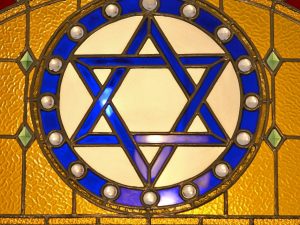 According to the new Pew Center survey of Jewish Americans, 45 percent of intermarrieds are raising their children Jewish or partially Jewish by religion. That is great news since the 2000-2001 National Jewish Population Survey found that only one-third of intermarrieds choose Judaism in some way.

But simply knowing that that the number of us living Jewishly has increased is not enough for me. I want to know why. Is it because of outreach efforts, changes in policies that have made some organizations more accepting of interfaith couples or a larger number of clergy who will officiate at interfaith weddings? Is it that more mixed faith couples are finding relevance in the history, culture, values, beliefs and observances of Judaism? Maybe the driver is something else.

Whatever it is, inquiring minds in the Jewish community should want to know. Why? Because if we want to build meaningful relationships with interfaith families or develop initiatives that entice families to explore Jewish life than we must understand what excites families like mine about Judaism and what attributes make religious connection important to us.

So in the interest of creating a better understanding of what drives intermarrieds to engage Jewishly, I want to share why Cameron and I have chosen a Jewish identity for our family. I recognize that our home is a sample size of one. But I hope that by sharing the drivers of our engagement that it will encourage other interfaith families to join the conversation and make their voice heard.

So here are the reasons we chose to be Jewish:

1. Community: A large part of why we decided that we would have a Jewish identity is because of community. When Cameron and I were dating we would often discuss how we should approach faith in the context of intermarriage. I wanted a Jewish home; Cameron wanted to celebrate both traditions. I needed to make a case for Judaism. While I could not provide a spiritual reason for having a Jewish family except that I did not believe in the divinity of Jesus, I did feel strongly about Jewish peoplehood.

I explained that there is a bond that unites every individual Jew with the larger Jewish community. This connection is expressed in the Hebrew phrase, Kol Yisrael arevim zeh bazeh. All Jews are responsible for one another. I wanted my children to feel a part of this bigger group.

2. Deed vs. Creed: Modern Judaism’s emphasis on action rather than belief is another reason we chose a Jewish identity for our family. While I believe that there is something larger at work in the universe, Cameron is less certain that a divine presence exists. Since Judaism teaches that doing good deeds is more important than believing in a certain idea about God, there is no pressure to conform to or accept a specific religious belief.

Cameron was raised in a home that took its responsibility for serving the larger community seriously, so the concept of tikkun olam, repairing the world, was attractive to him. Regardless of what we each believed about God, we shared a view that our purpose is to make the world a better place. Judaism provided us a framework to teach this idea to our children.

3. One Family, One Identity: Before Cameron and I got engaged we struggled to resolve our faith in the home dilemma. We read books that presented various interfaith arrangements from pursuing one to conversion to raising children in two religions to joining the Unitarian church. But it was a class on interfaith relationships at the Center for Religious Inquiry in New York City that helped us to find a solution. A rabbi and a rector taught the course, and one evening they impressed upon us the importance of choosing one religion.

“Your child is asked to make a winter holiday art project. She can make only one,” said the rector. “She must choose red and green paper to create a Christmas theme or blue and white for Chanukah. It appears that this is a simple choice, but for a child being raised in a home with two religions, with no clear religious identity, this is not a choice between colored papers, it is a choice between mommy and daddy. And that’s a decision no child wants to make.”

The story shocked us into thinking about our situation from a very different point of view. Rather than focusing on the compromises and feelings of adults, it made us see a child’s perspective and asked us to consider how our decision would impact our future children. Neither one of us could think about putting our child in the position described. After the discussion Cameron told me that he was comfortable with raising our children as Jews because being Jewish was about more than faith.

I would love to know why other 45-percenters chose a Jewish identity for their family. I would also like to know why 55 percent of intermarrieds made a different choice. I believe that we need to go beyond the numbers to learn what is driving behavior so that we can more effectively engage interfaith families. Because let’s face it, with almost 60 percent of recently married Jews choosing a partner from outside the faith the future of Judaism depends on bringing more families like mine into the tent.