Why I Never Visit My Father’s Grave 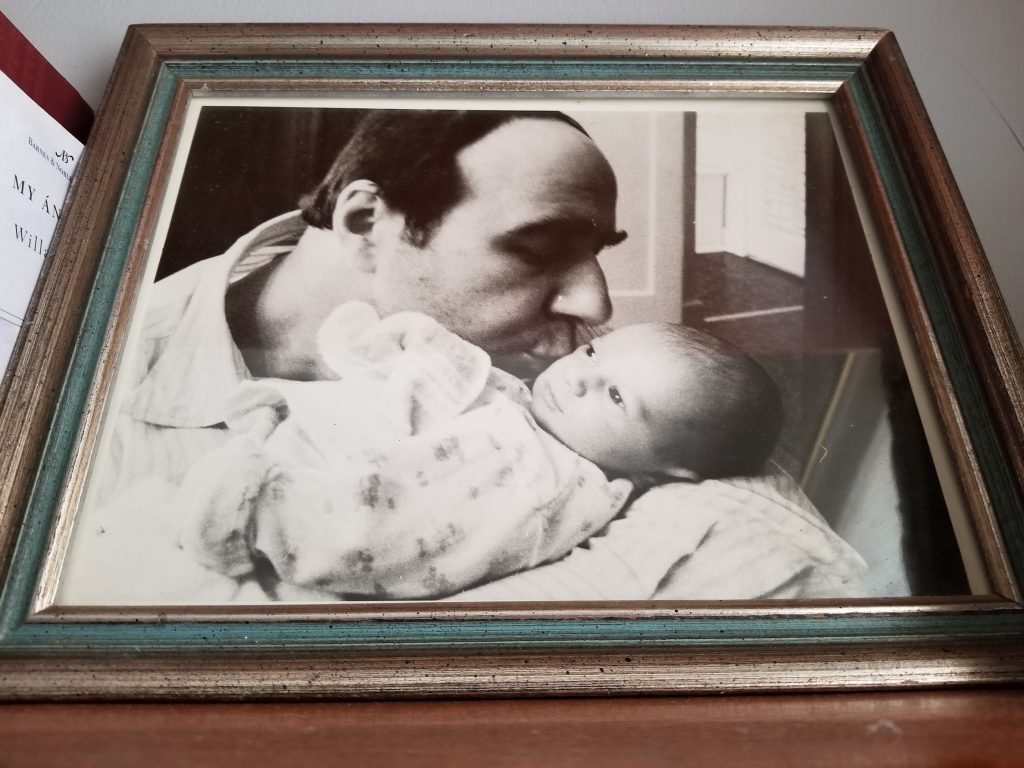 Numbers are a big deal in Judaism. Hebrew is an ancient language, but numerology is hidden in every letter of scripture. This is something I learned very early on: Numbers matter. Our time on this earth—our nights and our days are numbered. So it wasn’t surprising that I grew up on 23rd street in Brooklyn and my father died on August 23. I was 12-and-a-half years old. By Jewish law, I was a woman. But by losing a father at such a young age, a part of me remained fixed in time—always a little girl.

This year marks 23 years since my father died and I still haven’t set foot in the cemetery since childhood. This has nothing to do with numbers. This has to do with the fact that my father, a Brooklyn boy through and through, was buried in New Jersey of all places—Paramus, New Jersey. If I know one thing about the spirit, it’s that my father’s spirit wouldn’t be caught dead in Jersey. He’s not really there.

The dead live in our hearts. They live with us throughout our numbered days. Sometimes they ride the train or the bus with us. They help us cross the street on particularly tired days. We can’t see them, but they are around.

In Jewish tradition, my family believes that after death our souls go back to God. My husband’s family of Mexican Catholic tradition believes that the dead hover around all the time, just in case you need them. Once a year on Dia de Los Muertos (The Day of the Dead), Adrian’s family travels to the cemetery to leave the favorite foods of the deceased. I believe in all of that, but I also believe that my father still sometimes likes to visit my mother’s living room and sit in his big blue chair.

So this year, as my mother got dressed in her usual Sunday cemetery garb, she called to ask me the same question she’s been asking me for 23 years, “Are you coming with us to the cemetery today?”

My father was cremated—that is unheard of in Judaism. He sits on a shelf in a small jar behind a stone that says his name in both Hebrew and English. On the day he died, one of the neighbors remarked, “There’s Big Dave in a little jar.” I’m not sure my husband’s take on cremation and I’m nervous about asking him, but as it turns out, our two religions and cultures have more in common when it comes to death and dying than I would have suspected.

In Adrian’s village, when someone dies, the family stays up all night because they believe that the spirit of the person is still in the house. Then he informs me that the body must be buried within a 24-hour period. This is true in Judaism as well! Adrian also tells me that people are cremated in Mexico, but those people are usually from a bigger city whereas he is from a smaller village setting.

What Adrian can’t comprehend is that almost my whole family is buried in the Paramus cemetery and there is an empty lot next to my father that belongs to my mother whenever she’s ready to join him (hopefully no time soon). He says that’s the strangest thing he’s ever heard. I try to explain to him that it’s kind of like owning real estate and he refuses to believe me.

I talk to my father every day. And she may not know that I know this, but my mother talks to him every day too. There is a picture of my father in my living room holding me as a newborn. His face is close to my face and I have just been born. In that photo, my father is happy. He owns a house. He has a son and his daughter has just been born. He’s happily married. He goes to the theater once a week. He eats dinner out. He waters the lawn. In the photo next to him is a picture of Adrian and our little one, Helen Rose. In the photo, she has just been born and Adrian holds her in the exact pose as the photo of my father and me. Adrian is happy. His first child has just been born. He has a new apartment. He sees his friends and brothers once a week. He eats dinner out. He waters his plants.

It’s been 23 years since my father’s death. So much has happened without him, though it feels as though he were here just yesterday. In Kabbalistic terms the number 23 signifies a kingdom. Usually it refers to an inner kingdom. As a Jewish girl from Brooklyn who started a life with a Catholic boy from Mexico, I feel as though my choice to create an interfaith family has kept my inner kingdom and my family’s inner kingdom intact. The choice to give my daughter a vast knowledge of who she is breaks tradition and yet holds it in place forever.

I never visit the cemetery on the anniversary of my father’s death. It’s clear he’s still among us…in his own way.