Rosh Hashanah — What is the significance of this holiday?

Let our what is the meaning of Rosh Hashanah page help you answer this question.

Rosh Hashanah is the Jewish New Year and occurs on the first day of the Jewish month of Tishrei (on the gregorian calendar it usually falls in September or October). It literally means “head of the year,” or “beginning of the year.”

Rosh Hashanah, along with Yom Kippur, is considered one of the High Holy Days of the Jewish year. Ten days after Rosh Hashanah, comes Yom Kippur, which is Hebrew for the “Day of Atonement.” Because of differences between the Hebrew and Western calendars, the High Holy Days move around a bit on the Western calendar, but they always fall sometime in September or October.

The stretch of days in between Rosh Hashanah and Yom Kippur are sometimes referred to as the “Days of Awe” or the “Days of Repentance.” They’re serious but also joyful, and they are the one time of year when the largest number of people in the Jewish community attend synagogue services.

During this time, many people participate in a ceremony called tashlich, which means “casting off.” Traditionally, during this ceremony, people washed their sins away by throwing bread crumbs into a flowing stretch of running water like a river or ocean. However, more recently people have started using small stones, bird seeds, or oats instead of bread so as to not harm local wildlife. It is traditional to consume a new fruit like a pomegranate on the second night of Rosh Hashanah as a sign of the new year.

Rosh Hashanah is also thought to be a day of judgment, a time to repent for our sins and ask for forgiveness for wrongdoings. The main reason Rosh Hashanah is deemed one of the most important holidays on the Jewish calendar is that is about self-examination, forgiveness, the repairing of broken relationships, and giving ourselves a fresh new start.

When Is Yom Kippur 2021: Start and End Dates

How to Celebrate Purim at Home 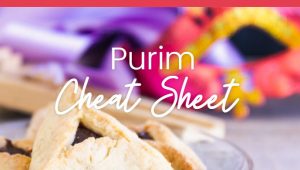