My childhood synagogue, Temple Or Rishon, was a hodgepodge of Jews and interfaith families, all of whom were happy to find a Jewish home in an otherwise Christian and Seventh Day Adventist area. Despite the Jewish community in Sacramento being very small, I feel blessed that I grew up in an incredibly eclectic and inclusive Reform synagogue in Orangevale, California.

I wish that more people could have such an affirming Jewish religious and/or community experience in their childhood—and adulthood as well. But synagogue-based religious life and education isn’t a good fit for everyone, for a variety of reasons.

While I am the Jew and leader that I am today in large part because of the synagogue in which I grew up, I recognize that day schools and synagogues don’t work for all Jews. There are other models where families can find Jewish learning and community. So where can Jews in the Greater Boston area send their children for formal Jewish education?

Experiential learning and Jewish arts and culture are central to their program. They offer extended day options so students can learn modern Hebrew, Jewish dance and Jewish theater. BJEP also offers adult learning and family education, runs High Holiday services and provides bar and bat mitzvah support. Headed by Rabbi Ari Lev Fornari as the education director, BJEP is organized and funded by the parents of students enrolled in the school and is governed by a volunteer parent board of directors. For more information, visit www.bjep.com. 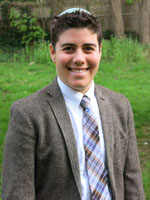 This past weekend, Hebrew College ordained a new graduating class of talented and committed rabbinical and cantorial students—mazel tov! Among them is Ari Lev Fornari, the newly-hired BJEP Director. He comes to BJEP with a dynamic and ambitious vision.

“BJEP is a vibrant community of learners and teachers, including multi-faith, multi-racial and LGBTQ families. We share a desire to create and transmit a Judaism that is relevant and meaningful. A Judaism that celebrates the many constellations of family. BJEP is a place where young people learn to value difference, curiosity and critical thinking. It is a place of imagination, creativity and play.

I was drawn to BJEP because of its out-of-the-box approach to Jewish education and its commitment to making Judaism real and meaningful. Traditionally there were different models for how to organize Jewish communal life. One of them was prayer, which grew into the synagogue model. Another was learning, known as the Heder. I see BJEP reinventing a model of Jewish community built around learning. It is my hope that as we grow the program, it will increasingly become a place of intergenerational learning, where we can support families on their Jewish and spiritual journeys.”

I’m thrilled that InterfaithFamily/Boston will have the privilege of working with Ari Lev to support BJEP’s interfaith families in the coming school year!