What Kind of Jewish Name is O’Donnell? 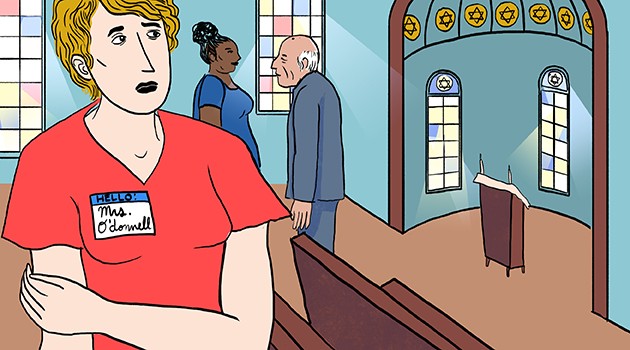 Should I take his Irish last name?

I’m a 30-year-old Jewish woman engaged to an Irish man with a very non-Jewish sounding last name. I have always wanted to take my husband’s last name, but his very goyishe sounding one is making me reconsider. As for our religious plans post-wedding, I am a barely observant Reform Jew and he is totally on-board on observing holidays in the same minimal way I do. So really, this isn’t a religious thing at all, but more a cultural one. —McSomebody

Surnames are no longer the Jewish identifier they used to be.

JANE LARKIN: It used to be easy to identify our Jewish classmates, neighbors, co-workers, and public figures by the sound and spelling of their family name, but now more than ever before, Jews come with traditionally non-Jewish last names, reflecting the diversity that is Jewish life in America today, and will be tomorrow. The last name of the president of my synagogue is McCartney, and as he pointed out in his installation address, he is listed in the temple directory after McCain, McCallister, and McCann, and followed by McCoppin, McCraw, McCurry, and McIntosh to name just a few.

More than ever, names can give a false impression of lineage. Professional athletes such as David Eckstein, Trevor Rosenthal, and Ryan Zimmerman sound Jewish, but aren’t, while Jose J. Bautista, Brian de la Puente, Taylor Mays, and Antonio Garay are members of the tribe.

Surnames are no longer the Jewish cultural identifier that they used to be. When we were packing our apartment to move from Connecticut to Ohio, my husband overheard a conversation between our two movers. One of them noticed the mezuzah on our front door and asked the other, “Is Larkin Jewish?” His partner responded, “It can be. It depends if it’s spelled the Jewish way.”

As far as we know, there is no Jewish spelling of the Irish name Larkin. Larkin descendants were stalwarts of the Christian church in certain areas of Ireland. But through our son, Larkin will join the increasingly diverse list of Jewish surnames in America.

My advice is to take your husband’s name–your new goyish sounding moniker will have plenty of company, especially in Reform Jewish circles–and highlight your Jewish heritage in another way. Today, a better indication of our Jewishness is the values we live by, the language we use, and the symbols we display.

The Jewish Daily Forward is a legendary name in American journalism and a revered institution in American Jewish life. Launched as a Yiddish-language daily newspaper on April 22, 1897, the Forward entered the din of New York’s immigrant press as a defender of trade unionism and moderate, democratic socialism.