What the Term “Interfaith Family” Means 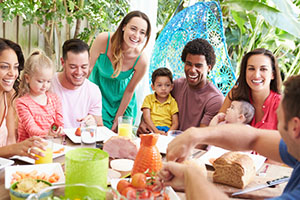 Today on eJewishPhilanthropy, Allison McMillan wrote an important piece, “Intermarried, Not Interfaith.” Her husband was an atheist when they met, had no religious connection to any holidays, is exploring Jewish traditions quite extensively, and has decided not to convert, in her words, “at least not right now.” She says their biggest issue is that they are labeled an “interfaith couple,” a term which “does not describe who or what we are. We are not trying to join two faiths together in our relationship. He is not halachically Jewish but he is also not anything else.”

I posted a response that I’d like to expand on here. For us at InterfaithFamily, the term “interfaith” does not connote anything about religious practice. It does not mean a couple that is practicing two faiths or trying to join two faiths together, or a couple where one partner is practicing one faith and the other is practicing no faith. It doesn’t mean a couple that is raising children “both” or in two faiths. “Interfaith” in the context of a couple simply means that one partner comes from one faith tradition or background, and one comes from another faith tradition or background. In the context of a family it simply means a family that includes one or more Jews and one or more people from different faith traditions.

We think that the term “interfaith” has become what in the legal field would be called a “term of art,” meaning a word that has an acquired meaning that may not be clear from the term itself. We think that most people coming from the Jewish world understand the term “interfaith” the way we do. And we hope that people like Allison could come to understand the term in that way, and not be bothered or offended by it.

Allison writes that there are “plenty of different phrases that can and should be used in place of interfaith,” but doesn’t say what phrase she would prefer. Over the past fourteen years I’ve heard many unsatisfactory suggestions. “Intermarried” doesn’t work because not everyone is, or, sadly, can be married. “Mixed” as in “mixed-married” or “mixed-faith” is old fashioned, “mixed” has a negative tone, and it’s not more clear or precise than “interfaith.” “Intercultural” or “inter-heritaged” (if that’s even a term) doesn’t work because Judaism is or certainly can be more than a culture or a heritage. No term is perfect to describe couples and families with members that come from Jewish background and another faith tradition – and we say that no term is better to describe such couples and families than “interfaith.”

Allison writes in her article that her and her husband’s situation is not black and white, and we certainly agree with her that there are “many shades of gray.” But as we use the term, “interfaith family” is very inclusive, of both immediate and extended families – interfaith couples where one person comes from a Jewish background and one come from another background, couples that include converts to Judaism who still have relatives who are not Jewish, people with one Jewish parent, parents of intermarried children, grandparents of children being raised by intermarried parents, etc.

Interfaith families may include those who identify their family as Jewish, as more than one religion, or who are unsure of how they identify. Our organization’s goal – which we are working to make the goal of many more Jews and Jewish organizations – is to meet these families where they are and facilitate deeper connection to Jewish life. Hopefully we can live with the limitations of terminology and all work toward that important goal.