I have officiated at many interfaith weddings during the past number of years. When I work with engaged couples, many of you are not sure about your beliefs, your practices and what you want for your wedding. Most of my couples self-identify with such terms as “cultural Jews,” “lapsed Catholic,” “just spiritual” or “Christian—but we don’t go to church.” You know you want to make your parents and families happy—and that you want your wedding to be meaningful.

How do you wind your way through the many decisions to create a ceremony reflective who you are as a couple? 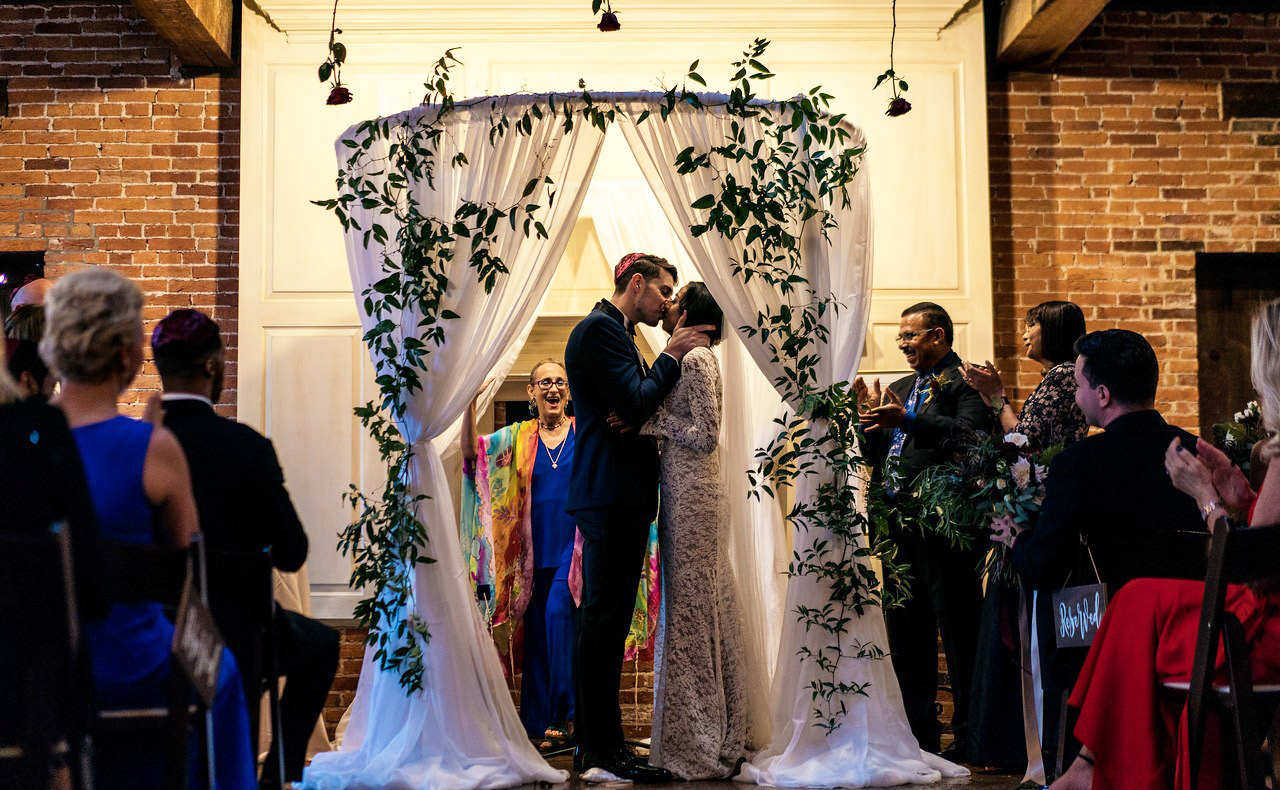 My approach is to guide couples and make it feel authentic to them. For example, you don’t need to sign an Orthodox ketubah if you aren’t Orthodox. You don’t need to have a ceremony all in Hebrew if no one will understand or appreciate it. You don’t need to do things just to please your parents—they’ve already had their weddings!

In a Jewish interfaith ceremony, most of the prominent visual symbols that couples usually want included are the ketubah (written document), chuppah (canopy) and the breaking of the glass. How does a ceremony then appear “balanced” if the Jewish customs are so visible? One way to even this out is to include the unity or sand candle ceremony that is used in some Christian and interfaith ceremonies signifying “two become one.” The mothers of the couple typically light the individual candles, and then together the couple lights a joint flame from the individual flames. Traditionally, at the very end of a Jewish wedding during the reception, three Kiddush cups were also used. Wine was poured from two individual cups into one. It’s the same symbolism as the unity candle—two become one.

What happens when the question comes up about the words and teachings of Jesus in the ceremony or using the language “in His name”? I usually try to explain that in preparing a wedding, I try to focus on things that unify people and that mentioning specifically Jesus is not a unifying factor. This is a personal decision, however, and each family has different feelings on the subject. The Jewish people have a long and complicated relationship with Jesus over many centuries that is beyond the scope of what I will cover here. I urge you to do some further reading on the topic so you will better understand the decisions you make for your ceremony.

In today’s climate of rising anti-Semitism, we need to be even more aware and sensitive to the fear that runs through Jewish communities. Given what we know about trauma and passing it to the next generation[1], it is no wonder some Jews will feel uncomfortable when Jesus is invoked. It is hard to be open hearted and filled with love when our worry gets triggered, and I want to create a happy relaxed atmosphere at my couples’ weddings. At the same time, many couples do want to reference Jesus or his teachings, and it is up to each couple to decide what reflects them and their guests. Sometimes I introduce a wedding with a sentence like: “Today we honor both family’s religious traditions, bringing the best they have to offer, recognizing it is better to be together than apart even while acknowledging the differences.”

There are many ways to include Christian prayer and readings without including Jesus, which is often the compromise couples make. There is a favorite passage that couples like to use from the book of Corinthians, written by Paul. It begins with “Love is patient, love is kind” and is traditionally read in many Christian ceremonies. Again, this is not a reference to Jesus’ name directly and does not invoke the theological divide that separates Jews and Christians. There are many other readings that can be found in order to be sensitive to the Jewish family members. In my opinion, a reading about love doesn’t raise too much concern, because most Jews do not even recognize the origin of it. I even had one Jewish/Jewish couple that wanted to use it at their wedding because they thought it was a standard wedding reading.

However, when it comes to Christological language such as “In the name of Jesus Christ, our Lord,” or “In the name of the Father, Son and Holy Ghost/Spirit,” to me, this is a boundary. A number of Jews in the audience may feel uneasy when they hear Jesus’ name; and then it is hard for them to relax for the rest of the wedding. Using the language “in the Name of Jesus Christ, our Lord” at the end of a ceremony can imply that the entire ceremony has been done in Jesus’ name, thereby invalidating the Jewish part of the ceremony. Using the language “Christ, our Lord” asserts that Jesus is the Son of God and is Divine and this is where you come up against conflict with Judaism.

If you do choose to include Jesus in your ceremony, it is important to be mindful of where and how his name is used so that the service honors both religions but does not set Christianity up in opposition to Judaism. This is why it’s important to have clergy as officiants, and to find clergy who have experience working with interfaith couples such as those you will find from InterfaithFamily’s referral service.

Another language sensitivity to be aware of is when scriptural readings refer to the “Old Testament and New Testament.” This sets up the notion that Christianity supersedes Judaism. The Jewish Torah, Five Books of Moses, should be referred to as “Hebrew Scriptures.” In interfaith weddings we want to honor a dual covenant theology with both of our traditions on equal footing.

I have also made suggestions in the past to change the language saying Father, Son, Shechinah and Adonai to see if we can broaden the definition of who is blessing this couple, as they are all names of God. I believe that we need to strive for something that is greater than the two of you with your particular backgrounds. You are creating a new family, a new entity, greater than the sum of each of your parts. It’s a great opportunity to think out of the box.

Rabbi Geela Rayzel Raphael is a rabbi in private practice in the Philadelphia area. She has a specialty in interfaith weddings and welcomes couples to her home on Shabbat. In addition, Rabbi Rayzel is an award winning singer/songwriter. You can visit her at Shechinah.com.