(Newton, MA) – February 20, 2014 – InterfaithFamily helps intermarried users with children at home engage in Jewish life and make Jewish choices, and helps Jewish professionals work with them, according to the results of its just-released 2013 user survey. 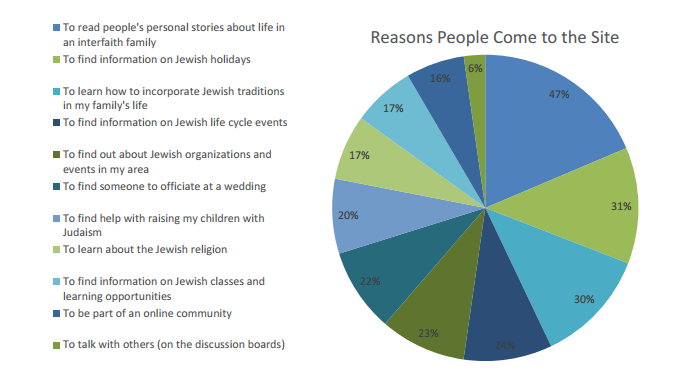 Of respondents who were intermarried, with children living at home, substantial percentages reported that InterfaithFamily had a positive effect in the past two years on their becoming interested in (53%), knowledgeable about (63%), and comfortable participating (49%) in Jewish life, and on their feeling of being welcomed by Jewish communities (46%). Sixty-one percent said InterfaithFamily positively influenced their incorporation of Jewish traditions and participation in Jewish rituals, 40% their participation in a program for interfaith families, 27% their sending their children to Jewish education classes or Jewish camp, 16% their making an initial contact with a synagogue, and 11% their exploring conversion.

In 2011 InterfaithFamily launched its Your Community initiative to offer comprehensive resources, programs and services in local communities. In 2013 InterfaithFamily/Your Communities in Chicago, San Francisco and Philadelphia had a full year of activities (Boston was added in October 2013). The user survey data provide an early indication of the stronger positive impact of on-the-ground operations; in Chicago, San Francisco and Philadelphia, among intermarried couples with children at home, 72% reported a positive effect on their knowledge about Jewish life (compared to 63% overall), and 72% on their interest in Jewish life (compared to 58% overall).

“We are pleased to confirm once again that interfaith families with young children, one of our key target audiences, find our resources valuable, and that we are influencing their decisions to make Jewish choices,” said Edmund Case, founder and CEO of InterfaithFamily.

According to the survey results, the majority (53%) of users are intermarried. But substantial percentages are parents of children in interfaith couples (19%) and converts or people in the process of converting (11%). Fewer are children of interfaith couples (8%) or interdating (6%).

Seventeen percent of users are Jewish professionals, including rabbis, educators and others.  Fifty-nine percent use InterfaithFamily as a reference for information on interfaith families, and 31% have used material from the site in a program they led or coordinated. They refer interfaith couples and families with whom they work to InterfaithFamily far more frequently than to any other organization. Sixty-five percent of professionals said IFF has helped them to see the potential for positive engagement in Jewish life by people in interfaith relationships, 57% to work with interfaith families, and 50% to develop welcoming policies and practices.

“We are pleased with the recognition of InterfaithFamily by Jewish communal professionals,” said Lynda Schwartz, IFF Board Chair. “Continuing to earn the confidence of rabbis and other professionals as a trusted resource for their constituents is very important to us.”

The survey shed light on why people come to the site and on what kind of resources and services they are interested in. A significant percentage (22%) come to the site for help finding Jewish clergy for their weddings. Twenty-three percent came to find out about Jewish organizations and events in their area; 52% said they are interested in information about events, and 34% about helpful professionals, all information available on the InterfaithFamily Network.

“Our user surveys help us to prioritize and most effectively use our available resources to serve our end users,” said Jodi Bromberg, InterfaithFamily President. “We are committed to ongoing evaluation of our offerings as key to our future growth.”

The survey was conducted between October and November 2013; 1,446 responded to the survey, and 1,107 completed it. The survey report can be found at: https://18doors.org/2013UserSurveyReport.

Jodi Bromberg is the CEO of 18Doors.