There are four main reasons why Jewish food seems distinctive. The first is the kosher laws, a set of food dos and don’ts, first recorded in the Hebrew Bible in the book of Leviticus and later elaborated by the rabbis in the Talmud. Most Jews today do not follow these rules about what animals to eat, how they should be slaughtered and prepared, and which foods may be eaten together. Still, for many Jews who were raised observant, the kosher rules help form a sense of what is taboo to eat, and what is normal. Some, for example, won’t eat meat from unkosher animals, even though they’ll eat meat that’s not ritually slaughtered. The idea of keeping kosher provides Jewish culture with a sense that there is a right way and a wrong way to eat and that food is important. 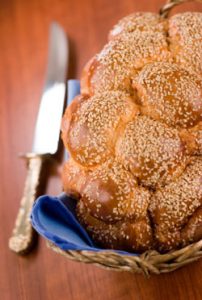 A second reason that Jewish food evolved the way it did was the customs around Shabbat, a day when observant Jews do not cook but are supposed to eat hot food. There is a whole set of dishes that can be cooked or kept warm overnight. A third religious factor in Jewish cuisine was the Passover holiday, with its special food rules that also stimulated Jewish culinary creativity.

The fourth reason that Jewish food seems different is our pattern of migration and cultural adaptation. Jews have a tradition of adapting the food of the surrounding culture to Jewish food rules, and then bringing those dishes to new countries. Most of the Jews in the United States are descended from Yiddish-speakers who immigrated to the US between 1880 and 1920, and we get our sense of what Jewish food is from these Ashkenazi, Eastern European ancestors. All the dishes with funny names like kishkeh and kasha and knish come from that wave–all the things we think of as “Jewish food.”

Not all Jews in the US came from those countries or in that period, however. There were earlier, 19th century immigrants who developed a Jewish cuisine that adapted their home dishes to regional ingredients available where they settled in America. There were Sephardi immigrants from Turkey and Greece who came in that big 1880-1920 wave who ate a lot of foods with Judeo-Spanish names. There is a small, tightly-knit community of Syrian Jews who take pride in their fantastic food. Western European Jews who came as refugees from World War II were more assimilated, and ate German or French dishes. Post-war Jewish immigrants have brought dishes from Israel and sometimes also from their grandparents’ Middle Eastern traditions. We all have the same pattern of creating kosher versions of local dishes and then bringing them with us from country to country.

Current patterns of interfaith marriage are sure to spice up this process of incorporating other food traditions into Jewish food. That can only be good!  We’re making foods from other traditions in a kosher fashion, and we’re eating older Jewish foods cooked by expert cooks who didn’t grow up in Jewish homes. The tastiness is only expanding. Check out some of our favorite recipes.

Jewish cuisine is not unique in one respect. Everyone today elevates the previous generations’ poor people’s or peasant’s food–starchy dishes, garden-grown herbs and undesirable cuts of meat–to be today’s delicacies. Things our great-grandparents ate because they had to are the things that we all crave now, no matter who we are or where we’re from. It’s probably also universal to compete within families about who has the best recipe for our soul foods.

How can you become part of a Jewish food tradition? By cooking and eating!