Traditions are Languages, Too 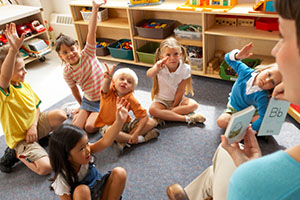 Traditions are languages, too.

Or at least, this is what my six-year-old daughter Laurel would have me believe. This week, I opened up her teacher’s monthly newsletter, scanning, as usual, for mentions of my own child. The final page usually includes what Laurel calls “jokes,” except they’re actually words “out of the mouths of babes” which sound funny to adult ears, but often mean more than they say.

This particular snippet of conversation went as follows:

Laurel:  “I speak English and Chinese and Spanish and Christian. And I speak Jewish too.”

I laughed, of course, when I read it, and Laurel chuckled, too. She meant “Hebrew,” of course, and “Christian” isn’t really a language. Yet even as the children in her class oppose English to their lessons in Spanish and Chinese, Laurel knows as an interfaith child that Jewish can be contrasted with Christian, and Judaism has a language which is not English.

Out of the mouths of babes, indeed. Religious studies scholar Susan Friend Harding, for example, argues in her book The Book of Jerry Falwell, that the way words are used in fundamentalist Christian culture is key to understanding that culture itself. Or, to put it another way, culture functions like a language, and finding one’s way through an unfamiliar culture is much like learning to speak, write, or understand a new language.

As she gets a little bit older each month, I find it fascinating to see how Laurel learns her way around patterns of tradition and observance. She does indeed “speak Jewish.” I hear her speaking Hebrew when we say blessings for Shabbat. I hear her adorable mispronunciations and as she follows her parents’ guidance through the words of the Shema, revealing her growing familiarity with the language of Judaism. Even her younger sister Holly, at almost 28 months, tries to say the prayers, which usually results in some very cute utterances.

She’s learning, too – I think – that churches and synagogues refer to similar types of places, but are not quite the same. One belongs to the “language” of Judaism, and the other to the “language” of Christianity. We, her parents, still dance nervously around the linguistic content of some of these religions: Ben remains as uncomfortable telling the stories of yet another Jewish holiday that exists because of some long-ago military triumph as I am answering her questions about Jesus – or even Santa Claus. In both cases, we try to treat the topics historically, and to say why Jews or Christians view these things as important. These conversations form one part of our daughters’ cultural knowledge and understanding, and one part of the “languages” they’re learning.

When I first wrote for this blog, Laurel at 5 was only beginning to understand what religion or holidays meant, much less that they could come from different backgrounds: Jewish, Christian, national, or secular, or something else entirely. What a difference a year makes, and as little Holly gets older, too, she’ll grow in her understanding of the “languages” present in our family.

Just last night, Laurel came into Holly’s room as I was putting her to bed. “I want to sing the Shema to my sister,” Laurel said, and she did, beautifully, her sister listening as the language of Judaism washed over her. This morning, the Shema is stuck in Laurel’s mind. She sang it repeatedly, joyfully throughout breakfast, and I have no doubt she’ll bring the language of Judaism with her to school today.

What “languages” do your children speak? With what traditions, knowledges, and practices must they become familiar, in order to speak, think or act in the traditions of your family?