You’re at a social or family gathering when someone starts throwing around a bunch of Jewish gobblygook you don’t understand. One guy is talking about a cool, new “minyan” in town and you’re picturing this guy. 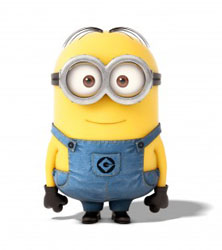 Someone else is talking about her “boobie” and you wonder if this is really too intimate a conversation for a party (Bubbie = Yiddish for Grandmother). Has this ever happened to you? A few minutes into a conversation among people who are Jewishly identified, and you’re likely to hear a little Yiddish, maybe bits of Hebrew or references to things that would be obscure outside of a Jewish context. Jews love Jewish jargon. Even some who aren’t Jewish love it (Check out Ed Begley Jr. turning on the Yiddish in the film, A Mighty Wind).

Some throw around Jewish jargon without realizing it and assume everyone understands. It is just part and parcel of being immersed in a civilization with a particular set of texts, languages, history and cultural terminology. They might feel that a Jewish context—a Jewish Community Center, synagogue or Jewish home—is a place where they can let their pent-up inner Jew run free. Jewish jargon can signal in-group solidarity as well. To be honest, though, I think others use it so they sound “in the know” or to purposely alienate someone else—which is unfortunate.

Whether intended or not, the result of Jewish insider-speak is that it can alienate people who aren’t Jewish and often even those who are. Judaism often seems like a club for the initiated. But we are becoming so diverse that one can’t expect even in Jewish places that everyone shares a common knowledge base anymore. And with the growing numbers of intermarried couples involved in Jewish life, there are bound to be a significant portion of people at any given Jewish happening who weren’t raised with Judaism.

I am hearing more and more often that if the Jewish community wants to be truly welcoming of interfaith couples, we need to make sure people don’t feel alienated by insider-speak, and that we should eliminate or curb some of our Jewish particularisms. Some even think that since we don’t want to create situations that make people stand out as unknowledgeable, we might want to tone down Hebrew in services to make them more universal. I remember speaking with one interfaith couple in which the partner who isn’t Jewish felt this way, remarking that he’ll never feel comfortable in a space where there is so much Hebrew because it’s not welcoming to him.

To become a truly welcoming Jewish community, do we need to become, well, a little less Jewish? Is it time to junk Jewish jargon?

Absolutely not. Judaism can be both welcoming and uniquely Jewish. My grandparents and parents grew up in the American melting pot era. Anyone “different,” including Jews, tried to play down their uniqueness and blend in. But we live in a very different time. We wouldn’t dream of asking any other minority, ethnic or religious group to abandon the very particulars that make it unique. In fact, most of us find these differences among us to be the interesting byproducts of living in a multi-cultural society (and maybe even what attracted us to our partners who come from a different background!).

So why would we rob Judaism of what makes it Jewish? Contemporary Judaism is more and more open to anyone who wants to be a part of it, and we are enriched by the diversity of people who are being drawn to Jewish life. That may mean that we can no longer assume we are all in on the jargon. But it doesn’t mean we have to dilute it. Instead, here are a few suggestions to make Judaism more welcoming while retaining its unique flavor, and some others that might help those less knowledgeable about Jewish life navigate Jewish jargon moments.

WHEN YOU’RE FEELING “IN THE KNOW”:

Translate. Does your mother-in-law talk about the machatenem (the other set of parents-in-law)? Whether you’re speaking at a party or speaking from the bima, take a page from our InterfaithFamily website. We always hyperlink words that might not be known (point in case: bima).  What if we all talked this way, offering subtle explanations just in case someone needs it? The worst that can happen is that everyone nods as if to say, “We already know.” Far better than the alternative: making someone feel that he or she is the only one who doesn’t.

Explain. You never know if people have the same cultural or religious contexts you do, so it’s always a good idea to explain what you mean when talking about ideas particular to a certain field or group of people.

Transliterate. Hebrew, Aramaic, Yiddish and Ladino are hallmarks of our rich, Jewish cultures. Let’s not abandon them. Instead, transliterate as a regular practice—whether it is a synagogue handout or a wedding booklet.

WHEN YOU’RE NOT FEELING “IN THE KNOW”:

Ask for help. If you are in need of more contextual information to make sense of something that was said, don’t be scared to ask for an explanation. You will be reminding the speaker that not everyone shares her or his knowledge and you may be saving the next listener from the same situation. Don’t just continue to nod as if you know—Judaism is a tradition with thousands of years of history, text and language. No one knows it all—even the person who’s speaking.

Don’t apologize. You have vast areas of knowledge that others don’t possess. There is nothing wrong, embarrassing or shameful about not knowing something!

Be open to learning. Judaism is a rich and complex tradition. Don’t assume that something within it isn’t meant for you. Delve in and learn something new or try to follow along in the transliterated Hebrew. Give it a try rather than expecting Judaism to cut out the pieces you don’t yet understand.

As our society and our families become more diverse, we are in the wonderful position of celebrating rather than diminishing our differences. So go ahead…embrace what is yours and learn about what isn’t. It’s a mechiah! (A great relief or blessing.)