Til Faith Do Us Part 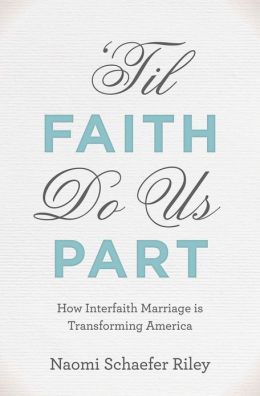 Right around Passover, there was some prominent coverage in the secular press about intermarriage due to the publication of Naomi Schaefer Riley’s book, ‘Til Faith Do Us Part and reviews in the Wall Street Journal (where she has been a religion writer) and the New York Times.

I’ve ordered the book but haven’t had a chance to read it yet. I thought Riley’s suggestion that religious communities “strike a delicate balance” in their approach to interfaith families, as described in the Wall Street Journal review, was itself fairly balanced:

On the one hand, they must welcome them if they wish to keep up a connection with the believing spouse and his or her children. But they must also provide a strong sense of community and a gracious but confident expression of their own religious worldview. “Regularly engaging nonmember spouses in conversations about the faith is important,” she writes, noting that such engagement, if done with a soft touch, may bring the spouse into the fold. Finally, religious communities must focus more on reaching young adults, giving them a venue where they can engage their religious faith in a new way and meet a “soul mate” who draws them closer to the fold rather than leading them away from it.

I’m concerned about the emphasis on the last point — that interfaith marriage leads young adults “away from the fold.” According to the Wall Street Journal review, Riley says that questions about child-raising can “tear at the fabric of a marriage,” that interfaith families are on average less likely to be happy, that the partners lose steadiness of observance and belief, that children are more likely to reject their parents’ faiths, and that couples are more likely to divorce.

The divorce point makes me question the basis for Riley’s observations. Back in 2010, I wrote a blog post, Are Interfaith Marriages Really Failing Fast, about a story Riley wrote for the Washington Post. Here’s what I said back then:

My main complaint about the article is that it cites no compelling evidence whatsoever to support the thesis of the title that interfaith marriages are failing fast. It is a common perception, to be sure, that interfaith marriages fail at rates higher than same faith marriages, but I have never been able to find reliable evidence to that effect. In addition to citing a 1993 paper (but not any data in it comparing inter- and intra-faith divorce rates), Riley says that “According to calculations based on the American Religious Identification Survey of 2001, people who had been in mixed-religion marriages were three times more likely to be divorced or separated than those who were in same-religion marriages.” Who made the calculations? Are they published some place — and available to be scrutinized?

Susan Katz Miller, in her blog On Being Both, also finds Riley’s stance on intermarriage to be “strangely pessimistic” and finds her “gloom and doom” not supported by Riley’s own data.

I also question the basis of Riley’s observations because at InterfaithFamily we have published many narratives and heard from so many interfaith couples that they have resolved questions about child-raising, have children who learn to love Jewish practice, and who themselves strengthened observance and belief — and are quite happy in their marriage. People like the brother of Stanley Fish, author of the review in the New York Times, who describes the lengths which their father went to break up his brother’s relationship and concludes:

If the idea was to separate the two young people, it didn’t work. Shortly after Ron got to California, he sent Ann a plane ticket. When she arrived, they got married and have remained married to this day. She got a job at the university, took a class in Judaism and, much to my brother’s surprise, converted, although it took her a while to find a rabbi willing to give her the required course of instruction. Just the other day she remarked, “It was a hard club to get into.”

The New York Times review suggests that Riley isn’t against intermarriage — she’s in an interfaith and inter-racial marriage that has worked:

She just wants prospective interfaith couples to know that it is work, that love doesn’t conquer all, that “a rocky road may lie ahead of them” and that they “need to think in practical terms about their faith differences — how it will affect the way they spend their time, their money, and the way they want to raise their kids.” Her message is that if you don’t make the mistake of thinking it will be a bed of roses, you’ll have a better chance of its not being a bed of thorns.

That’s balanced advice, too — although again, I’m concerned that “bed of thorns” overdoes it.