Three Denominations Under One Roof

A Reform rabbi, a Conservative rabbi and a 17-year-old Orthodox Yeshiva student sit down to eat Shabbat dinner… Sounds like the beginning of a joke, right? 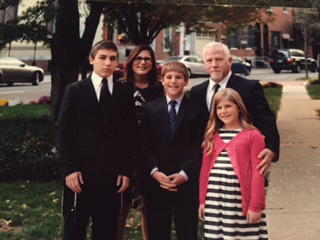 It was my family last Friday night. We were also joined by my two younger children. In my family, we’ve got a taste of k’lal Yisrael—the whole Jewish community—under one roof. I often tell my younger kids jokingly (well, mostly joking) that if my oldest son goes on to get Orthodox smicha (rabbinic ordination, which many males in his Orthodox community do) then I want one of them to be ordained at the Reconstructionist Rabbinical College, so we can have rabbis in all four major denominations of Judaism in our immediate family.

I was thrilled to have my oldest son home for a weekend break from his Yeshiva (Orthodox boarding school focused primarily on the study of traditional Jewish texts) and to have my whole family gathered together around our Shabbat dinner table. As I blessed my children after lighting the Shabbat candles, I put my hands on each of their heads and then kissed them, and I thought about how lucky I was to have each of them and how much I love each and every individual in my religiously diverse Jewish family.

Sure, having a very observant Orthodox child (which he has been for two years now) in our family isn’t always easy. I had always assumed that my kids would all live at home until going off to college at the age of 18, but instead my oldest began boarding at an out-of-town Yeshiva this past September, when he was 16-and-a-half, and I miss having him at home. But when he is at home it’s challenging that our level of kashrut (Jewish dietary observance) isn’t as strict as his. While my husband and I will eat fish or vegetables at regular restaurants, he’ll only eat at a kosher restaurant with a hashgacha (kosher certification) that he accepts. His lifestyle’s very different from ours so that, even when he’s not at school, it’s not really possible for him to travel with us unless we were to go to places where predominately Orthodox families travel, so that he can pray, eat and follow laws of modesty in ways that are comfortable to him. But those same lifestyle choices might be uncomfortable for the rest of us.

We make it work. When he’s home, we go to our favorite kosher restaurant. Last December we took our two younger kids out of school a few days early to go away over winter break so that we’d be back in time for our oldest son to come home for his long weekend off that started on December 29.

As I tell the interfaith couples that I work with, and as I’ve come to appreciate in my own life: Being in a relationship means respecting differences, honoring the person you love even when you disagree, compromising where you can, and knowing what issues are non-negotiable for you and for the other person. (For example, my son won’t attend a service where men and women sit together, so I accept that he won’t come to my synagogue when he’s home. And he accepts that, while I’ll wear a long skirt and follow the other laws of dressing modestly while visiting him at school, unlike his classmates’ mothers, I normally wear pants.)

Equally important is working hard not to judge the other person. When my son started to become very observant, my husband and I sat him down and said to him: “We’re very concerned about you being Orthodox, because Orthodoxy is so judgmental.” My son looked us in the eyes and without missing a beat said: “Do you have any idea how judgmental you’ve been of me and of my being Orthodox?” The words stung, because we knew he was right. We weren’t really being as open-minded, tolerant and accepting as we thought we were. Sure, it’s easy to be tolerant of whatever you’re already comfortable with. It’s a lot more challenging to be tolerant when something is outside of your comfort zone.

I often speak to parents whose adult children are in interfaith relationships. I tell them that when our children are young, we can choose how we raise them and what we expose them to. We have all kinds of expectations about what they should be like and what they should do as they grow older. And we think that by what we tell them and with the example we set, we can control how they’ll later lead their lives and the choices they’ll make.

Sometimes this is true. But other times, our children will follow their own paths, and fall in love with someone—or in my son’s case, a way of life—that’s different from what we’d planned. This can be difficult, but ultimately we need to respect and honor our children’s choices. This same advice I give to parents whose kids are in interfaith relationships applies to my own religiously diverse family.

Being in a family with intra-faith differences, like being in an interfaith family, has its challenges. But just like being in an interfaith family, it also has its blessings. The bottom line is that I love my wonderful, crazy family with all of our intra-faith diversity. It isn’t always easy, but it’s my family, and I couldn’t imagine it any other way.