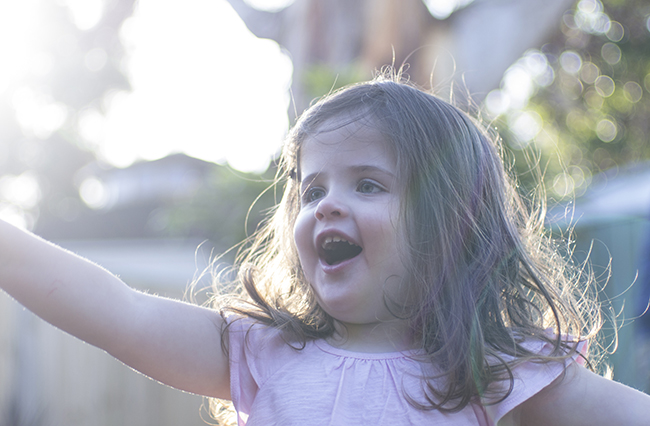 With the drama of the High Holidays receding into the past, I find myself thinking about the charms and challenges of bringing a toddler to synagogue services.

This past summer, our family moved to a different, nearby suburb, one that’s full of as many synagogues as we could reasonably hope to shop around. With the business of moving, we didn’t attend services very often this summer, saving the serious shul-shopping for a more settled time.

Not attending services, though, has meant that our 3-year-old daughter has virtually forgotten what happens at synagogue. During this time she’s also moved more firmly into the phase of life where every other statement begins with, “Mommy, why?”

Given these two facts, I shouldn’t have been surprised by what happened recently at an early-evening outdoor service billed as “family friendly.” We arrived just as the service was starting, and sat on benches at the back of the group as the congregation sang “Bim Bam” over the harmonious strains of a guitar.

That’s when the questions began.

“Mommy, why are we on benches?”

“There aren’t enough chairs right now, honey, but that nice woman over there is bringing more out.”

“Why aren’t there enough chairs?”

I leaned down to whisper to my daughter between phrases of the song. “It’s a busy night, sweetie.” The singing ended; the service began in earnest, and my daughter continued her queries.

“Mommy, who are the people up front?”

“Why are my sister and daddy wearing those hats?”

“What is everyone saying? I don’t know the words to this song.” (We were singing “L’cha Dodi.”)

“Mommy, they said ‘stars!’ I know that word!” This caused particular excitement.

When the service leaders lit the Shabbat candles, I knew the drill.

“Mommy, I know this song,” she said with excitement as the blessings were recited. “Mommy, are there candles up there?” She stood on her tiptoes, trying to peer over the grown-ups to see the candles in front.

At various points, she asked me, “Mommy, why are we sitting outside? When are we going inside?”

On my other side, my 6-year-old asked her own very pressing and important question: “Mommy, when is it time for dessert?” She meant, of course, the oneg, at which she usually made a beeline for cookies after consuming a healthy chunk of challah.

“I don’t know if they do an oneg Shabbat here,” I replied cautiously.

“But I really want dessert,” she explained, as if this would make the appropriate oneg appear.

“I know,” I replied. “We’ll just have to wait and see. Besides, challah is sweet like dessert.”

My daughter answered me with a skeptical glance any teen would envy.

Eventually we came to the Shema, which my daughters both know from bedtime, and their eyes lit up. My youngest asked, “Mommy, how do these people know this song too?”

“It’s a very important Jewish prayer,” I whispered between syllables.

The service became quiet as the congregation entered a moment of silent prayer and meditation. She noticed, and said, not exactly loudly, but not very quietly, “Why is everyone being so quiet?” I leaned down and whispered, “Shhhh. People are praying and thinking about important things, quietly. Please be quiet.”

“I am being quiet,” she stage-whispered. One moment later: “Can we talk louder now?” Me, still whispering: “Not yet, OK?”

And thus the service continued. At one point, I left with both girls to explore the outside of the synagogue, an adventure that was accompanied by a conversation about whether or not there was a playground (and if so, could they play on it), when “dessert” would be, and whether or not the service had moved indoors yet.

I’m an interfaith parent. As an outsider, it’s tough for me to know if this adorable little girl, with a remarkably precise voice, is cute, or is simply annoying to the other worshippers. Part of me wanted to praise my daughter’s constant questioning, her curiosity, her innate sense that “this night is different from (most) other nights,” at least in her recent 3-year-old memory.

By contrast, my oldest sat quietly in her seat (for the most part), standing and sitting. While her better behavior pleased me, I also missed the spontaneous, exuberant ritual dancing she used to burst out with at the slightest strain of music. I had always worried that her expressions of joy would simply be seen as a nuisance, a disruption. Now I wondered about her sister’s incessant questions. Would we be asked to leave? Were people frowning at us? I felt torn between a desire to conform to what I thought was likely appropriate (quiet, seated behavior) and a true delight in my children’s participatory joy.

I asked my husband about this later, and was surprised to learn that he, too, although Jewish, felt uncertainty as an outsider to that particular congregation. His words surprised me. Norms vary between congregations of whatever faith, I realized. Maybe my questions weren’t so much a matter of being Jewish or not, but of simply being a newcomer, learning to breathe, knowing that kids will be kids, and knowing that one day we may well miss those days when they asked every question and danced to each note of music.