The Lone Muslim at Passover Camp

I am pretty sure that I was the only Muslim at Passover camp this year. A retreat in the beautiful mountains of northern Georgia, Camp Ramah Darom offers Jewish families the chance to get away for the week of Passover. It features outdoor activities, arts and crafts, sports, worship, and lectures and conversations on Jewish life. This year, my in-laws gathered all their children and grandchildren—from New Jersey, Maryland, and Israel—and took us to camp.

I was nervous for reasons big and small. First there was the knowledge that the 12 of us—including four very active kids and a baby—would stay in one large room with bunk beds for a week. I love my in-laws and they love me…but really, isn’t such an arrangement just asking for trouble? 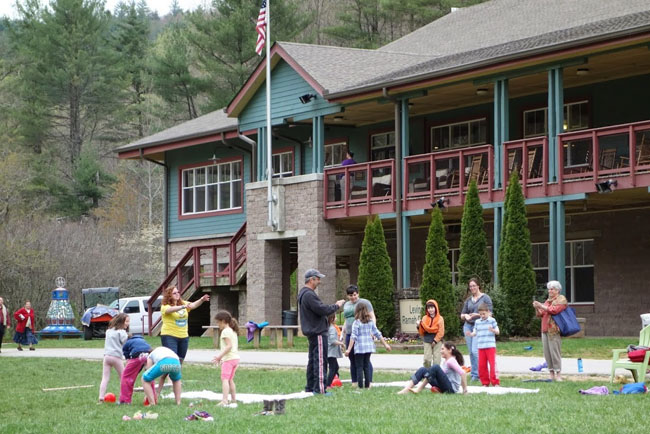 A kids’ activity at Passover Camp

Leaving aside issues of snoring, unusual grooming habits, and other things that fall into the TMI category, I worried that my husband’s parents might be uncomfortable with my presence. Even a little embarrassed. Despite being religious and committed to Jewish continuity in their family, they have been wonderfully welcoming of their Muslim daughter-in-law. Now, though, we would be showcasing this relationship to their tight knit community—one that frowns upon intermarriage.

Another reason to be nervous was the issue of balance. Although my husband and I are not religious in either of our traditions, we try to maintain a balance in our limited observance of each. We light Shabbat candles with our kids, and observe Muslim holidays. Most people think we are somewhere on the spectrum of naïve to crazy: They warn it will be time consuming, contradictory and confusing to lead our family down the path of retaining two religiously inspired cultural traditions. One thing I can say about this balancing act—whatever else it may be—is that it is delicate. Passover camp, I thought, would be a test of this project. Coming right on the heels of the raucous fun that is Purim, would so much active engagement in Jewish life disrupt the balance?

And the main reason for my apprehension: Wouldn’t I stick out like a…well, like a Muslim at Passover camp? How would the other campers respond to a Muslim in their midst? Would they feel like I was invading their sanctuary? Would I feel welcome?

This last fear turned out to be the easiest to dismiss once I arrived. Nobody asked about or seemed to care about my background. They pleasantly wished me chag sameach, we talked about work and kids and the activities at camp, and when my origin or religion came up, it was always part of a friendly exchange. I participated in the seders and listened to my kids’ thoughts on Moses. I went to a lecture on the Conservative movement’s relationship with Jewish law. But we were generally busy with things like yoga, hiking, or boating—and I mostly just forgot I was different. The other campers’ lack of attention to my difference, whether intentional or not, was the most welcoming thing about the whole experience.

What I did experience was maybe a little harder to accept than feeling different or unwelcome. I felt jealous. I wanted to go to a Muslim camp, where there were religious activities and prayer times for those who are so inclined, but where it would not be unusual if you decided you were mostly going to engage in community life outside of worship. I admire the Jewish institutions I have experienced so far—whether the JCC or an outfit like Ramah Darom—for enabling and enriching community life and a sense of identity, and allowing non-religious families like mine to participate without hiding who we are.

In the end, Passover Camp exacerbated my anxiety about balancing the Muslim and Jewish components of my family life. The diverse, multinational Muslim communities in America have not yet developed the robust cultural institutions that would allow an interfaith family, or a non-religious but culturally-interested family, to feel welcome and comfortable. But maybe this will change. In 2011, the Pew Research Center found that 72 percent of Muslims in the United States are first or second generation immigrants. Like all immigrants, the third and fourth generations are likely to have different cultural-engagement needs than the first two.

That final reason I was nervous—wondering how my in-laws might feel introducing me to a community that is concerned about intermarriage—is something to think about. Despite sending their children to religious schools and keeping a Jewish home, my husband’s parents have been only partially successful in ensuring that future generations engage with Judaism in the robust manner that they do. My family’s à la carte approach to religious life does not fulfill their (and many others’) vision of what Jewish community and continuity ideally ought to be.

Indeed, intermarriage is widely considered to be the biggest threat to Judaism in America. The October 2013 Pew Research Center survey showed that the number of people of Jewish ancestry or ethnicity that identify themselves religiously as Jews has declined steadily and dramatically over the last century, and that intermarriage is a major factor that contributes to this trend. The survey found that almost all Jews who have a Jewish spouse say they are raising their children as Jewish by religion (96 percent). But among Jews with a spouse who is not Jewish, this number falls to 20 percent.

Less widely reported is that Pew researchers have also shown that a rising share of the children of Jewish intermarriages are Jewish in adulthood. Among Americans age 65 and older with one Jewish parent, only 25 percent are Jewish today. But among adults under 30 with one Jewish parent, 59 percent are Jewish today. Perhaps the increasing openness of Jewish community institutions to intermarriage has helped bolster this trend.

For me and my family, the à la carte approach is a pretty good solution. In fact, for someone of my pluralistic (naïve? crazy?) mindset, it is sometimes even more satisfying than adhering to a single tradition. An opportunity to be part of a community without the pressure of conversion is one essential component of a two-part deal that I hope my husband and I can have with religio-cultural organizations of both our traditions. The second part of the deal is to take the “inter” part of interfaith seriously. One reason I had such a good time at Ramah Darom is that I did not have to hide that I am Muslim. Neither did I feel the need to broadcast it. I was just myself.

Rameez Abbas lives in the Washington, DC area. She is an editor at a DC-based think tank, and a political scientist who writes about South Asian politics and migration issues.