The Case of the Missing Sav, and other mysteries in the transition of American Hebrew

When I was a child, I was confused. Why did my mother talk about how she had a Bas Mitzvah, while I prepared for my Bat Mitzvah? Why was the way my father pronounced Hebrew different from the way we learned it in Hebrew school? As I got older, my father and I would sit next to each other in shul, hissing “t” sounds and “s” sounds at each other competitively whenever the Hebrew letter “tav” (or, as my father called it, a “sav”) made an appearance in the liturgy 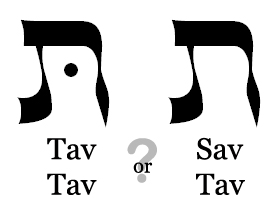 When I went to college I noticed that not only was there a tav/sav issue in the way different people pronounced Hebrew, but my roommate, a Lutheran from North Dakota, kept insisting I was pronouncing the names of the Jewish holidays wrong, saying Yum KIpper instead of Yoam KeePOAR, Rush HAshuna instead of Roash HashaNAH. I was utterly confounded by this issue, as I had never been taught about it in any formal way. Meanwhile, my roommate couldn’t understand why she knew more about pronouncing Hebrew than I did, and I wondered why my family had gone around pronouncing everything incorrectly.

I am not alone in my confusion, and you may also have wondered what is going on as you hear people pronounce Hebrew in different ways. The Bas Mitzvah/Bat Mitzvah issue is caused by the letters tav and sav, which look the same except for a dot, called a “dagesh,” in the middle of the tav. This letter at the end of the Hebrew alphabet was pronounced as a “s” sound by Ashkenazi Jews, who came from Eastern Europe and Russia, and as a “t” sound by Sephardic Jews, who came from Spain, Africa and Middle Eastern countries. In addition to having different ways of pronouncing the tav/sav there are also many other differences between the way Ashkenazi and Sephardic Hebrew are pronounced, including different ways of saying vowel sounds and how syllables of words are accented, thus accounting for why my college roommate was befuddled by my pronunciation. Many years of speaking Hebrew in separate communities led to many varieties of how the language was pronounced.

American Hebrew shifted from being dominated by Ashkenazic pronunciation to being dominated by Sephardic pronunciation, gradually, after the founding of the state of Israel, which had elected to primarily use a Sephardic Hebrew pronunciation. When Jewish people moved to what is now the State of Israel, they spoke a variety of languages from their homelands. Many spoke some degree of Hebrew, and Sephardic Hebrew was used to communicate between groups. In the late 1800s, when groups needed to communicate among each other they used Hebrew with a Sephardic pronunciation, which was considered more high-class. As modern Hebrew developed, a language council was formed to work to standardize the language — a hard job to do — and they decided officially that Hebrew in Israel would be spoken with a Sephardic accent. (For more on this history, check out Jeff Kaufman’s “The Revival of the Hebrew Language.”)

Unlike in Israel, where the more settled Jews had been Sephardic when Ashkenazi Jews started arriving in significant numbers in the 1800s, most of the Jews in the United States had Ashkenazi backgrounds. Camps, schools and other infrastructure existed to teach children Ashkenazi Hebrew, in addition to it being the language of synagogues’ prayers. The transition to Sephardi pronunciation was gradual, and was aided by growing feelings of Zionism, the availability of Hebrew courses on college campuses taught in Sephardi Hebrew, sometimes by Israeli instructors, and other factors.

Currently, both pronunciations exist in the American Jewish community — Sephardic pronunciation is frequently taught formally in day schools and Hebrew Schools, while Ashkenazic pronunciation is often passed on mimetically, from grandparents talking about brachos said on Shabbos to grandchildren who have been learning in Hebrew School about brachot said on Shabbat. As Hebrew has been evolving and developing different ways of being said for thousands of years, I would love to know how my great-great-great grandchildren will pronounce Rosh Hashanah, or whether we would understand our respective variations of mazal tov. Either way, it is certain that not everyone will ever agree on how Hebrew words should be said, and that there will be many ways of speaking Hebrew correctly.

Amanda Koppelman Milstein is a freelance writer and evaluator who lives in Washington, DC. She has a masters in Public Policy with a focus on Poverty Alleviation. She enjoys seeing how much butter and heavy cream she can put into baked goods, performing standup comedy, and secretly sometimes pronounces her tavs as savs when her father isn’t around to hear.