The Miracle of Light 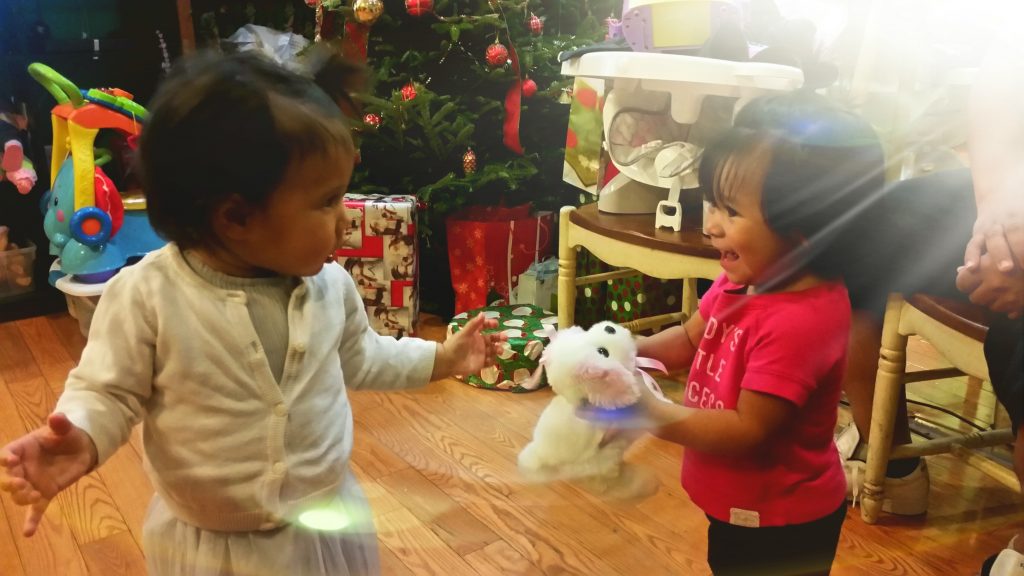 This interfaith holiday season has been trickier than I thought. If there is a lot of planning, cooking and gift buying for one holiday, then the two holiday celebrating seems impossible. My family celebrates Hanukkah and Christmas. But, we are not just a Jewish/Catholic home. We are a Brooklyn Jewish and Mexican Catholic household. This means a few things. First it means that I had to decorate with two faiths in mind, cook with two faiths in mind and buy gifts with two faiths in mind. What it also means is that I messed up a lot of traditions, which I now know I need to fix for next year. It’s hard trying to get everything right and I’ve been so concerned about teaching Helen, our 1-year-old, about our different traditions that I forgot to relax and pay attention.

Here are a few examples of the way I historically ruined part of the holidays. Apparently in Mexico, Christmas is a big deal but it’s something called “Las Posadas” that’s an even bigger deal. The “Posadas” begin on December 16 and end on December 24 (Christmas Eve). In Mexico it means a party every night from the 16th to the 24th and a re-enactment of Mary and Joseph’s trip to Bethlehem in search of lodging. Although I heard Adrian mention the “Posadas” I assumed this tradition was on Christmas day. On Christmas Eve while Adrian was at work, I was making a traditional Mexican punch to surprise him with and while reading the recipe I read the story of the “Posadas” and realized I HAD MISSED THE MOST IMPORTANT PART OF THE MEXICAN CATHOLIC HOLIDAY! Great.

That was mess-up number one. Here’s something else. Hanukkah began the same night as Christmas Eve this year. I was supposed to make tamales (a tradition in Mexico on Christmas) and latkes. Out of my concern for how to make the tamale recipe perfect, I FORGOT TO MAKE THE LATKES. Great. 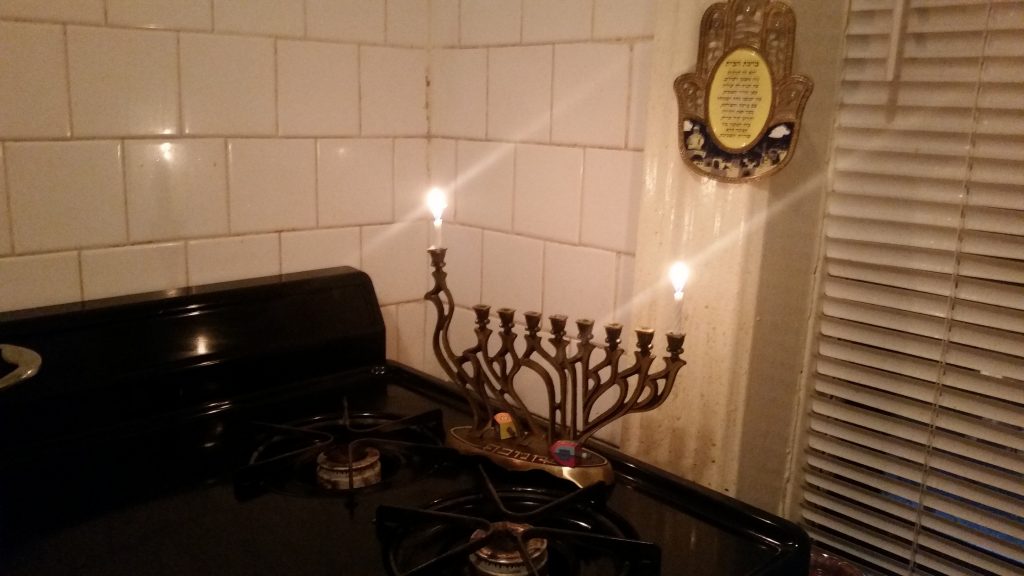 That was mess-up number two. It gets better. Little did I know that tamales take almost four hours to make! The recipe said one to two hours. But, ask anyone from Mexico and they will laugh if you say one hour. I found this out later. I had told Adrian not to eat at work, so he got home at midnight when I thought the tamales would be ready and we ended up waiting until 2:30 a.m. when they were finally ready and we were so tired that we ate one each and went to bed.

That was mess-up number three. On Christmas day we went to my brother’s house with the baby. My brother has twin boys and he and his wife threw a Hanukkah party. My mother brought the latkes to that party and we all lit the menorah and had a great time. Then Adrian, Helen and I went to Adrian’s friend’s house and saw their tree and their baby Jesus statue. Helen had a great day. But, when we got home I had another recipe I had yet to make and I was so exhausted that when I went to put something in the blender I forgot to put the top on and green tomatillo sauce splattered all over the kitchen (and my mother who had come over to watch the baby while Adrian and I made dinner).

The Hanukkah story is about not having enough of something, or thinking one doesn’t have enough of something. On Hanukkah the Jews celebrate the small band of Jews who defeated the Greeks during the time of the second Temple. When the Greeks made all of the oil in the holy temple impure, the Jews found a little bit of oil left. But, the oil they found was only enough to last for one day. And then a miracle occurred and the little oil they had come across ended up lasting for eight days. Hanukkah is the celebration of light. 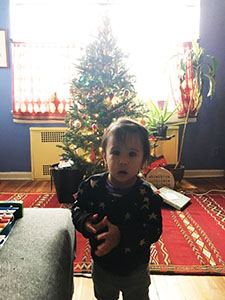 Christmas too is a celebration of light. The lesson of Hanukkah is that sometimes in great darkness a miracle can happen. The birth of Christ teaches this same lesson. A lot of the challenges my family faces during the holidays has to do with teaching our daughter to respect and understand both of our religions and cultures. It is about starting new traditions and sticking to them so that when she grows up she can feel the love of both faiths and choose her own path. But another challenge is the need for others to take our beliefs seriously. At the Jewish homes we go into we have a need for people to take us seriously and the same goes for the Catholic homes.

Adrian and I visited two of his friends’ homes during the holidays. Both friends have children. At the first house his friend’s daughter who is 7 years old ran to greet us at the door and took Helen out of my arms so she could carry her to her toys and play with her. At the second home, the other friend’s daughter is Helen’s exact age. They played with dolls, stuffed animals and books. At my brother’s house my nephews are a few months older than Helen. They all ran around laughing and opening their Hanukkah presents. These are the real miracles of light. Children have no inhibitions, no preconceived notions. They want to play and explore. They want to love and be loved. Sometimes out of total darkness they appear. They are the rare oil, the spark that lights the whole Beit HaMikdash (The Holy Temple).