The Ghosts of My Grandmothers or How We Named Our Newborn 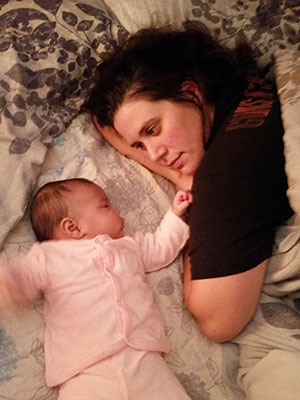 Some people believe that when a child is born the angel of death and the angel of mercy stand in the room side by side. During the delivery of my baby I watched the monitor as her heart rate dropped and lifted with every contraction. “The cord is wrapped around her neck,” the doctor said, “don’t worry this is very common.”

In Hebrew the Malach Hamavet, the angel of death, is a warning. He is sent by God to show how precious life is. He is the angel who made himself known to David, Samuel and Moses and he was in my delivery room making everybody nervous.

My partner, Adrian, who is originally from Mexico is not afraid of the angel of death. The Catholics in Mexico have a Saint that signifies death; they call her “La Muerte” and she is a good luck charm. Day of the Dead in Mexico celebrates death. People bring food to the graves of the ones who had passed. They actually cook the favorite meals of the deceased and bring them to the cemeteries as a celebration.

“Don’t worry, don’t worry…” Adrian said even though with all his faith in God and the Virgin and even La Muerte I could see fear in his eyes.

How could I not worry? This was my first child. I had carried her for nine months. I had taken all of my vitamins, exercised, eaten right and slept well. I wanted her journey into this world to be safe and harmless. That would be too easy though. Even when my doctor asked me three months before delivery if I had a birth plan, I said “No” and she said, “That doesn’t matter. Anything you plan never goes as planned anyway.”

I did what any Jewish girl from Brooklyn trapped in a room with the Angel of Death would do: I called on the ghosts of my Grandmothers.

Grandma Helen had been a social worker. She was a Barnard Graduate when women were not pushed to go to school. When her son, my uncle, had some trouble she sold her wedding ring to send him into therapy. Grandma Rosie raised four boys, two of her own and two of her sisters’. She read the stocks every day and always had Tanqueray gin and Canada Dry tonic water in her fridge until the day she passed away. 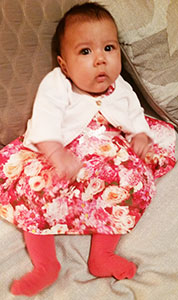 The greatest thing about being with Adrian is that his beliefs and my beliefs often merge and intertwine. He didn’t think it was at all strange that I had propped up photos of my two Grandmothers in the delivery room. He knew La Muerte was there and she was cunning. I felt the Malach Hamavet and he was filing his nails waiting for my next move.

When the ghosts of Grandma Helen and Grandma Rosie showed up, death packed up his things and left. I pictured my Grandmothers barging in with plaid suitcases and polka dot dresses pulling a cigarette out from Death’s lips and pointing to the door. My Grandmothers basically took over and stood behind the doctor as I pushed for forty minutes. On the last push as the baby came out I saw the cord around her neck. A nurse reached over to take the baby and the doctor smacked the nurse’s hand away and untied the cord from my daughter’s neck faster than I thought was possible. In my heart I knew it was my Grandmother untying that cord. No doctor in his or her right mind would smack a nurse’s hand away. Grandma Rosie would do that.

If my newborn had been born a boy we would have named him David, for my father and Zacharias for Adrian’s grandfather. Because the baby is a girl her name was easy for us to choose: Helen Rose. She took Adrian’s last name to symbolize both of our cultures. She took my two Grandmothers’ names to symbolize strength.

What’s unique about interfaith families is that there is always more than one way to do something. Two faiths offer more choices. Now on the Day of the Dead we won’t only bring traditional Mexican dishes to Adrian’s deceased family members, we will bring plates of food to my Grandmothers as well. On Day of the Dead we will cook for my father, for my grandfathers and for my Uncle Mark. The menu will be a mix of pastrami on rye, borscht, perogis and other favorite dishes of my family.

Baby Helen Rose will witness a coming together of cultures, a mixture of faiths and we will continue to highlight the importance of both as a presence in her life. She will learn the Hebrew prayer for mourning called “Kaddish” and we will light candles in memory of those who have passed on. When she is old enough I will show her photographs of Grandma Helen and Grandma Rosie and explain that these women live on in her. They come back to life once a year on the Day of the Dead. They put down their plaid suitcases and straighten their skirts and like most Jewish women in my family they ask the same question when their ghosts arrive each year: “What time do we eat?”