Symbols and Observances of Hanukkah

Return to the Guide to Hanukkah for Interfaith Families 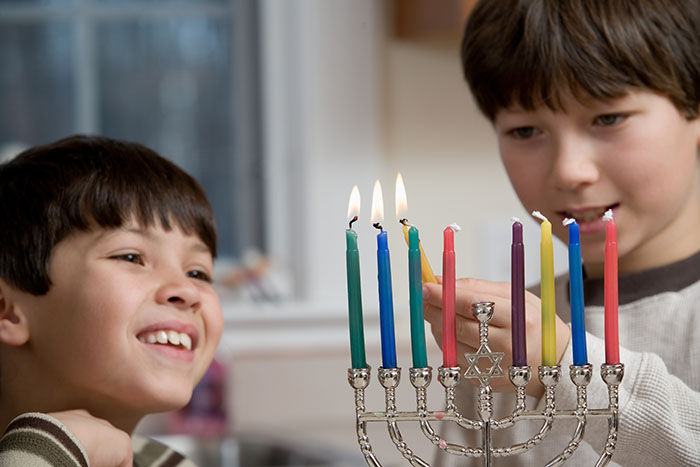 Hanukkah, unlike the major Jewish holidays, does not require any days off from work, any major preparation or any long worship services. It’s an eight-day holiday that consists mainly of lighting candles, singing songs, eating traditional foods and playing dreidel.

Hanukkah’s sole mandatory religious observance is lighting the Hanukkah menorah or lamp, also called the Hanukkiah. The menorah has receptacles for nine candles, one for each of the eight nights of the holiday, and one “helper candle,” the shamash, to light the others. Each night of Hanukkah, there’s a protocol for lighting the candles. Gather everyone around and start by lighting the shamash. Then, holding the shamash, begin reciting the blessings.

On the first night, there are three blessings to recite: a blessing announcing the commandment to light the Hanukkah candles [listen here], another on the miracles God did for the Maccabees [listen here] and a blessing of appreciation for reaching a happy occasion, called Shehecheyanu [listen here]. Then use the shamash to light the first candle on the far right of the menorah. You can see a short InterfaithFamily video demonstration of the whole procedure here. Some families light the candles while they sing the blessings. On the 2nd – 8th nights of Hanukkah the routine is similar, except that one only recites the first two blessings – the Shehecheyanu is just for the first time one celebrates a holiday in a year. On the 2nd night, there are two candles in addition to the shamash: one on the farthest right position, and one more to the left of that.

Each night, add another candle to the left, and light the candle in the new position first, followed by the candles that represent the previous nights. By the 8th night, the lamp is blazing away with nine candles. In a family where each member has his or her own menorah, or at a Hanukkah party where a group lights theirs together, this can be a fun, if slightly pyromaniacal, religious practice. (Seriously, fire safety is important. There have been so many Hanukkah-related fires in Israel that the government has put forward these safety tips. Apartments pose their own fire risks – here are some tips.)

Children love to be involved in the candle lighting even before they are old enough to safely light candles on their own. If you have a set of Hanukkah candles that include different colors, you can have kids take turns getting to pick the colors each night. Kids can also make their own Hanukkah menorah; there are many versions of this craft project. If you are using a craft project menorah, just be certain that the candles won’t fall out of it, and never leave a lit menorah to burn unattended. Most Hanukkah candles are designed to burn all the way down within 20 minutes.

Many families sing Hanukkah songs after the candles are lit. The traditional custom is not to make use of the candles for anything work-related, just to appreciate them. It’s also traditional to place the menorah in a window in order to publicize the miracle to passersby – again, be careful of fire hazards like curtains. Electric menorahs can be fun to place in your window sill if you’re concerned about fire safety. 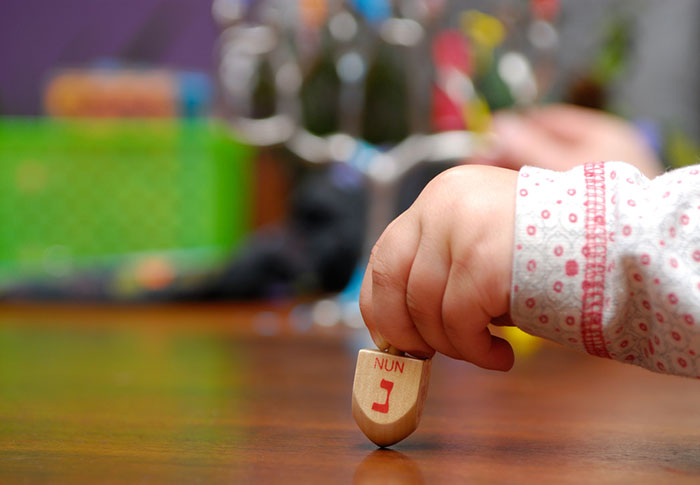 The dreidel is a four-sided top with the Hebrew letters nun, gimmel, hey and shin on it, one letter to a side. Though there is folklore about how the Maccabees played dreidel, the custom probably stems from a medieval German and Irish gambling game popular in parts of Europe. Dreidel is one of many historical examples of a different culture’s customs getting integrated and modified to fit Jewish beliefs and practices.

So how do you play dreidel? Well, it’s a simple gambling game. Everyone starts with a bunch of coins (often chocolate in gold foil). Then, the first player spins the dreidel, just like one would spin a top. The Hebrew letter that the dreidel lands on determines what happens next. If the player gets a gimmel, she gets all the coins in the pot; if it lands on hey, he gets half the pot; if it’s shin, she has to put one coin in to the pot; and if it’s nun, he gets nothing and gives nothing. The four Hebrew letters form an acronym of a Hebrew sentence that translates to “A great miracle happened there.” In Hebrew that sentence goes like this: nes gadol hayah sham. This encoded message serves as a teaching tool for kids to learn about the story of the Hanukkah miracle.

People who grew up Jewish have sometimes had lots of experience spinning a dreidel, and others do not, but no matter your history with the game, it’s not hard to learn. If you haven’t already mastered the skill, it only takes a little practice and soon you too can be a dreidel expert. If you want to amaze your Jewish relatives with an obscure practice, learn how to spin the dreidel on its stem, upside down. The wooden dreidels work the best for this. Just have fun and try not to eat all the chocolate before the end of the game.